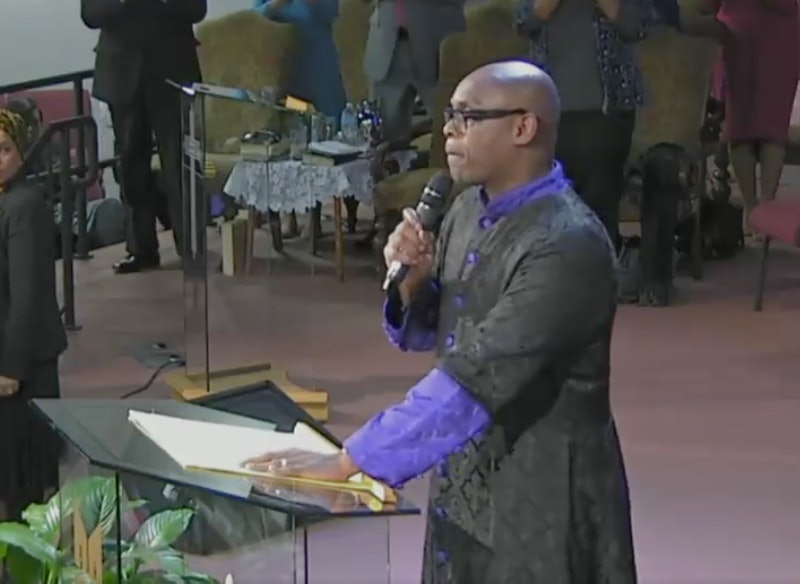 Mike Pence might not have expected a lecture in politics, when he went to Metropolitan Baptist Church in Largo, Maryland, on Martin Luther King, Jr. Day, but Dr. Maurice Watson gave him one anyway. The Maryland pastor derided Trump, with Pence and his wife Karen in the front row, for Trump's alleged comments calling Haiti, El Salvador, and African countries "shitholes."

"It is alleged that a hurtful, dehumanizing, visceral, guttural, ugly adjective that I cannot repeat in church, was allegedly used to characterize some of the nations of Africa," Dr. Watson said in his sermon, which addressed Trump's comments. As he continued, the pastor said he felt it was necessary because numerous church members are from Haiti and various African countries.

[A] statement was made that we ought to welcome people from Norway more than we should welcome people from Haiti. I stand here today as your pastor to vehemently denounce and reject such characterizations. Whoever said it is wrong, and they ought to be held accountable.

At another point in the sermon, Dr. Watson said that in the face of a comment like this, he wanted to stress the "worth ... dignity ... [and] humanness" of the people in his congregation from Haiti and Africa.

"You are owed an apology, but you probably won't get one," he said, all without mentioning Trump by name.

Pence's face reportedly turned red at various points during the speech (although his office denied this), but he has not acknowledged or commented on the content of the sermon. His office released a statement on his visit to the church:

Yes, the VP attended the service yesterday with the Second Lady and Secretary Perdue. He was welcomed by the Pastor and the congregation received him with open arms. The VP and Second Lady went from church to lay a wreath at the MLK monument.

Dr. Watson tells NBC that the vice president's office had called him and told him to expect the Pences' visit, but that he wasn't thinking about their presence when he planned the sermon.

"I felt I needed to speak up, and I would have spoken up regardless to whether the vice president came or not," he told NBC Washington. "It wasn't about his being there. This was about trying to be a responsible pastor to speak up for God's people."

His words, Dr. Watson said, were directed at his parishioners rather than at the vice president, who made no reference to the church visit at all in his social media posts for MLK Day.

"I did not look at [Pence] while speaking," added Watson. "I wanted to keep my focus on speaking to my people, because it wasn't a personal attack. I wasn't trying to personally go after the vice president."

The MLK day sermon apparently served quite effectively as support for the people slighted by the president's comments, even if he didn't mean it as an attack on Pence. Throughout the video, loud cheers can be heard, and those listening reportedly stood up to applaud as well.

Dr. Watson did not say outright that he found the Trump's statements and his administration's policies to be antithetical to the values that Martin Luther King, Jr. represented, but he did point out how exactly the "shithole" comment goes directly against what MLK stood for.

I think the best way to honor Dr. King's legacy is to speak up for and stand up the values for which he spoke and stood. And the main value that Dr. King stood for is the value of love. ... There was nothing that was loving in that adjective, nothing loving in that statement about Haiti. We can do better than this. We can do better than this as a nation.