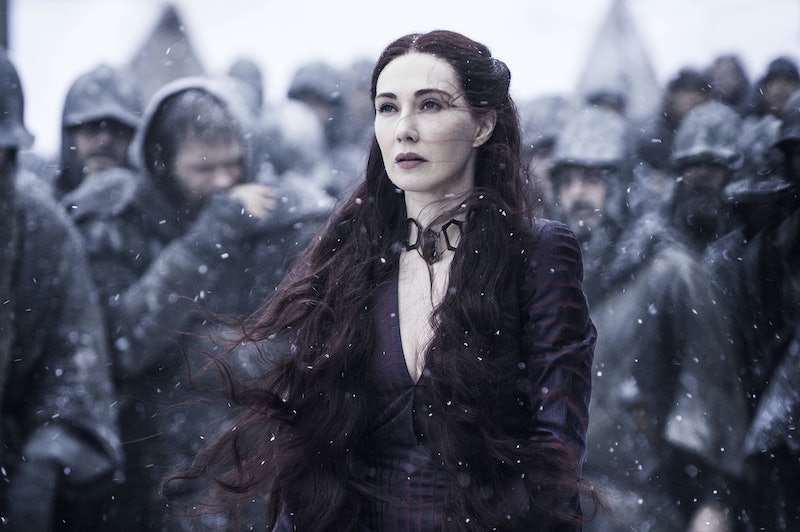 The HBO show Game of Thrones has cut quite a few characters, both major and minor, from the original Song of Ice and Fire novels. They've cut warrior princesses and secret lady scholars, they've cut whole dang Targaryens and they've cut kick ass zombie Stark moms. But out of all of George R.R. Martin's strange and wonderful creations who didn't make it to the small screen, one stands apart as the creepiest freaking dude in all of the Seven Kingdoms: Patchface the fool.

I don't say that lightly, either. There's a lot of creepy to go around. This is a book series that includes multiple zombies, child murderers, and re-animated child-murdering zombies. We've got Melisandre birthing shadow demons and disembodied hands crawling all over the place, Addams Family-style. And through all of this, Patchface is still the creepiest.

Not only that, he might turn out to be rather important to Maester Martin's plot.

We don't know exactly where Patchface came from, but we do know that he ended up as a jester slave in Volantis when he was still a boy. Like all the slaves in Volantis, he had his profession tattooed on his face. In his case, this means that his face is covered in red and green motley, or "patches," hence his name.

(Yes, he is essentially a creepy clown.)

Steffon Baratheon, daddy to Robert, Stannis, and lil' Renly found Patchface while on a trip to Volantis. He thought that Patchface was witty and hilarious, and decided to bring him back to Storm's End to teach Stannis to laugh (good luck with that). On his way home, though, Papa Baratheon ran into a storm that utterly wrecked his ship. The Baratheon parents were killed, Frozen-style, along with everyone else on board.

Except for Patchface. The poor jester kid washed up on the shore three days later, apparently dead. His skin was cold and clammy. But then he coughed and sat up and returned to life... mostly. He was never quite the same after those three days he spent under the sea.

Instead of a witty, hilarious jester, new Patchface was a bit more cryptic. When we meet him in the books, he mostly mumbles incoherently, occasionally breaking into weird little songs about life under the sea. He also wears a set of belled antlers and walks sidewalks like a crab, so... that's creepy.

He follows the little girl everywhere, singing his nonsense songs:

"Under the sea, smoke rises in bubbles, and flames burn green and blue and black. I know, I know, oh, oh, oh."

But the real creepy thing is that his songs might not be nonsense?

They might be predicting true events. For instance, right before the Red Wedding, Patchface comes out with this:

"Fool's blood" refers to the Aegon Frey, called Jinglebell, who's the jester in the Frey household. Catelyn kills him at the Red Wedding. "King's Blood" is, of course, the death of Robb Stark, the King in the North. The rest of the rhyme refers to Roslin Frey losing her virginity, her husband Edmure being imprisoned, and all the rest of the guests taken prisoner or killed.

Patchface also predicts the death of King Joffrey, in his own creepy way:

It is always summer under the sea. The merwives wear nennymoans in their hair and weave gowns of silver seaweed. I know. I know…

"Nennymoans" are poisonous sea anemones. During Joffrey's wedding, Sansa Stark wears a silver gown and has a poisonous hairnet (a necklace in the TV show), which is used by the Tyrells to off the king.

Patchface makes a number of these roundabout "under the sea" prophecies, all of them ignored by basically everyone except for Shireen. He also just says generally creepy things that imply some kind of connection to the coming army of the dead, like:

In the dark the dead are dancing. I know, I know, oh oh oh.

That creature is dangerous. Many a time I have glimpsed him in my flames. Sometimes there are skulls about him, and his lips are red with blood.

According to Melisandre, Patchface is some kind of agent of the "Great Other," the cold, clammy god of death in her religion.

But Patchface also has ties to another deity: the Drowned God of the Iron Islands.

So the real question is... is Patchface just some poor, half-drowned fool? Or is he actually a prophet for the Drowned God/Great Other? We've seen unnatural Fire Zombies brought back by the Lord of Light, and Ice Zombies brought back by the White Walkers. We've even seen that one Tree Zombie guy. Is Patchface some kind of resurrected Water Zombie? Did he meet the Deep Ones, the creepy merfolk who supposedly lived on the Iron Islands before any humans got there? Did he actually die and come back to life? What would happen if he teamed up with a Greyjoy uncle?

And most important of all... is he on the side of the dead or the living?

Patchface seems harmless enough for now. But his only friend in this world is little Shireen, and if the TV show is any indication... things are not going to end well for Stannis's daughter. If Patchface sees his BFF burned alive for the magic of her blood, is he going to become the bloody clown monster from Melisandre's visions?

We'll just have to wait and see.

More like this
This Episode 6 Moment Foreshadows Viserys' Fate On 'House Of The Dragon'
By Grace Wehniainen
Nicola Coughlan Shared A Lady Whistledown Excerpt From ‘Bridgerton’ Season 3
By Grace Wehniainen, Alyssa Lapid and Sam Ramsden
6 'Game Of Thrones' Halloween Costumes That Aren't Overdone
By Nina Kahn
You’ll Definitely Recognise Both Of Ty Tennant’s Parents
By Maxine Harrison
Get Even More From Bustle — Sign Up For The Newsletter