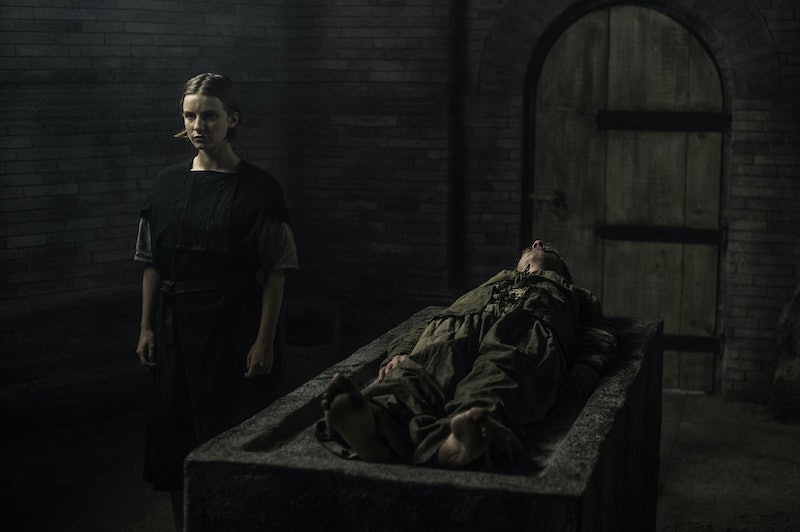 Fans are now waiting on the final season of the Game of Thrones TV show, and there are really only a few mysteries left to unravel: what are the White Walkers after, who's going to win the Iron Throne, and how weirded out are Jon and Dany going to be when they find out that they're related? In the Song of Ice and Fire books, however, there's a lot of mysteries left to go — including a few crucial plots that never made it into the show.

I mean, I know they have to cut a lot for time and TV budgets... but did we really have to lose the subplot about the Faceless Men at the Citadel, complete with murder, dragon eggs, and a kickass secret lady scholar?

In both the show and the book, fans see the maesters' Citadel through the eyes of Sam, Jon's BFF and the least threatening man in all of Westeros. Sam and his wildling girlfriend, Gilly, head down to Oldtown with a baby in tow, so that Sam can study at the Citadel (basically Westeros grad school) and find out how to stop those pesky White Walkers from destroying humanity. Simple, right?

Here's where things get very different between book and show, though. TV Sam confronts his dad, hangs at the Citadel, heals professional sadboy Jorah Mormont, ignores Gilly, and finds out where all the cool dragonglass is hidden to help with Jon's zombie catching adventure. That's the basic outline of Sam's plot over the last few seasons. Fair enough.

In the books, though, Sam has to part with Gilly at the Citadel, since women aren't allowed to go to grad school in this universe. He sends Gilly and the baby — who is not Gilly's real baby but is, in fact Mance Rayder's baby, but that's a subplot for another time — to his parents' place.

Sam, now all alone, meets some of the other cool grad students and talks with Archmaester Marwyn about some fun prophecy junk. Marwyn believes that Dany is the only one who can save the world from the snow zombies, so he hurries off to help her out on the other side of the world. Meanwhile, Sam is shown to his dorm room by a new friend named Pate.

Except, hold on a minute: we first met the character Pate in the prologue to A Feast for Crows. Pate is an awkward grad student at the Citadel, where he hangs out with his buds, including the enigmatic Alleras. Sam also meet Alleras later on, and it's pretty dang clear to anyone who paid attention during the Dorne chapters that the 'boy' Alleras is actually the lady Sarella Sand, a Dornish Sand Snake, in disguise so she can learn without persecution.

Pate doesn't know this, of course. He's a little... thick, for a grad student. Especially because he's promised some random guy called the Alchemist that he would steal a Very Important Maester Key for him, in exchange for money.

We follow Pate through his night, until he finally meets the Alchemist in a dark alleyway and the Alchemist turns out to be (dramatic music here)... Jaqen H'ghar.

In the show, Arya gets to hang with Jaqen over at the Faceless Men clubhouse in Braavos. In the book, though, she doesn't see him again after they part ways in Westeros. The description of the Alchemist is identical to the last face we saw Jaqen in.

Pate, of course, doesn't know he's dealing with a Faceless Man, so he gives him the Super Special Key, takes the money, bites a gold coin to test it, and dies. End of prologue.

...and then fast forward to the end of the book, several hundreds pages later, and Pate is suddenly Sam's new freshman buddy at the Citadel. Despite being dead? So yeah. Given Jaqen's penchant for stealing corpse faces, it's safe to say that Sam is bunking with a Faceless Man. Hopefully Sarella will protect him if things get out of hand?

The real mystery here, though, is why the Faceless Men need to be at the Citadel. We know that they work for hire, but it seems unlikely that Jaqen was sent only to murder Pate. He has the Special Key, but if he's bothering to kick it with Sam instead of just stealing something and skipping town, it seems like he might have a longer con in mind.

So what's he after? And who hired him? The Faceless Men don't usually run errands for people, they're trained assassins. Why would Jaqen need something from the Citadel to kill someone? Is it possible that he needs some extra info to carry out a big hit job? Like murdering a dragon? Does he need Sam for something? We know that Sam has the Horn of Winter, with the power to bring down The Wall, and that's probably something that shouldn't get into the wrong hands.

Or Jaqen he there on Faceless Men business, and not a hit job? One popular theory is that Euron Greyjoy, everyone's least favorite pirate, paid the Faceless Men with a dragon egg for offing his brother, Balon. We know that Euron once had a dragon egg, which he "threw into the sea" in frustration... which is pretty on brand.

Is it possible that Jaqen's trying to hatch his own baby dragon, and he believes the secrets to doing so are kept in the Citadel?

We just don't know yet. But until The Winds of Winter comes out... be super nice to your new classmate, Sam.