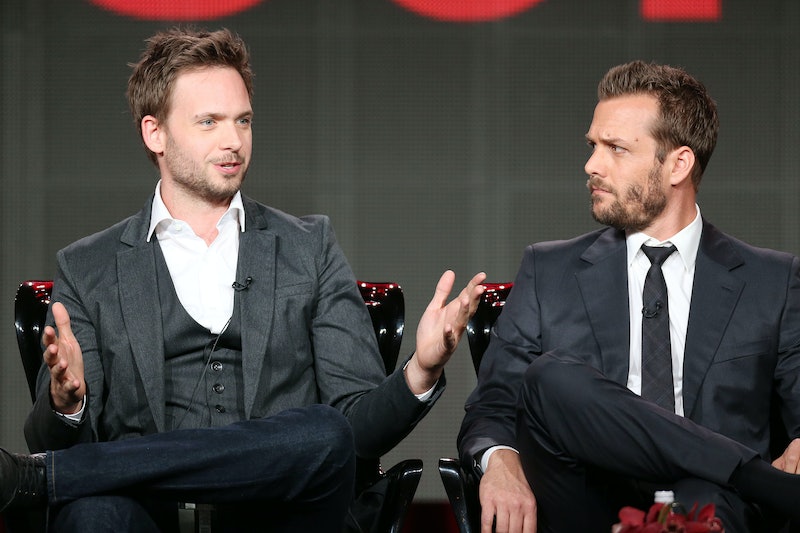 The end is near Suitors. Season 9 of Suits, premiering July 17, will be the legal show’s last season. The stories of Harvey, Donna, and Louis have been a winding road filled with lies, deceit, crises, explosive fights, pain, and vulnerability as they worked together in the tough New York legal arena and fought to keep their firm (whose name is ever-changing) in tact at all odds. The trio watched Mike Ross, whose broship with Harvey was the centerpiece of the series, and Rachel Zane get married and leave NYC and bid their leader Jessica Pearson farewell after she returned to her hometown in Chicago. It’s certainly been a different show without these beloved characters but there will be at least one reunion because Patrick J. Adams is returning to Suits for a final farewell, per USA Network.

It’s not clear how many episodes Adams will appear in, but the network confirms that Mike Ross will be in Episode 5, which falls right in the middle of Season 9’s 10-episode arc. Mike made his last appearance in the Season 7 finale when he revealed to his BFF Harvey that he and Rachel were moving to Seattle to start their own legal clinic. Now, according to USA, he will face his mentor and Samantha Wheeler in the courtroom on a case.

It’s always uncomfortable yet entertaining to see Harvey and Mike at odds, but it makes sense to have them go through a battle of wits one more time before they hopefully find common ground and remember that they love each other. And, Samantha is sure to bring some cutthroat drama to the mix, but she may not be ready for the inevitable tricks that Mike always has up his sleeves.

Mike and Harvey may be battling in the courtroom, but the actors actually shared a warm embrace when Adams stepped back on the Suits set in Toronto. Gabriel Macht, who portrays Harvey, and Adams spoke to Entertainment Weekly about their joyous reunion. “We haven’t worked together in a year and a half, but it feels like there has been not a second that has passed,” said Macht.

“There was a moment in the first scene as I walked up to him where I was like, ‘Holy s**t, this is the energy. This is what we had for seven years.’” Adams chimed in and said it was “a gift” to return for more laughs and to playfully push his co-star’s buttons one last time.

Of course, Meghan Markle will not reprise her role as Rachel alongside Adams because, well, she is very busy being royalty and all, but that doesn’t mean she won’t be mentioned in the final season. Per CinemaBlend, Adams confirmed that Mike will talk to Rachel over the phone to ensure fans that their once-rocky relationship is on very solid ground. “There’s phone calls with Rachel saying, ‘Goodbye, I love you,’ and, you know, I think there’s some obvious acknowledgement that she’s still there and a part of the show.”

So, never fear Suits lovers – Mike may be a pain in Harvey’s side this season, but things are all good with Rachel Ross. Something

Will Harvey and Mike still be friends after a courtroom battle? Will Mike get Litt Up by Louis? The drama is going down in a few weeks and it’s sure to be entertaining.

More like this
Here’s Why Danny Masterson’s Hyde Isn’t In 'That '90s Show'
By Brad Witter
Here’s What Happens To Bill & Frank In 'The Last Of Us' Video Game
By Brad Witter
Michael B. Jordan Tackled His "Public Breakup" With Lori Harvey On 'SNL'
By Brad Witter
The 'Gossip Girl' Reboot Creator Is “Looking For A New Home” To Air A Potential Season 3
By Brad Witter
Get Even More From Bustle — Sign Up For The Newsletter
From hair trends to relationship advice, our daily newsletter has everything you need to sound like a person who’s on TikTok, even if you aren’t.