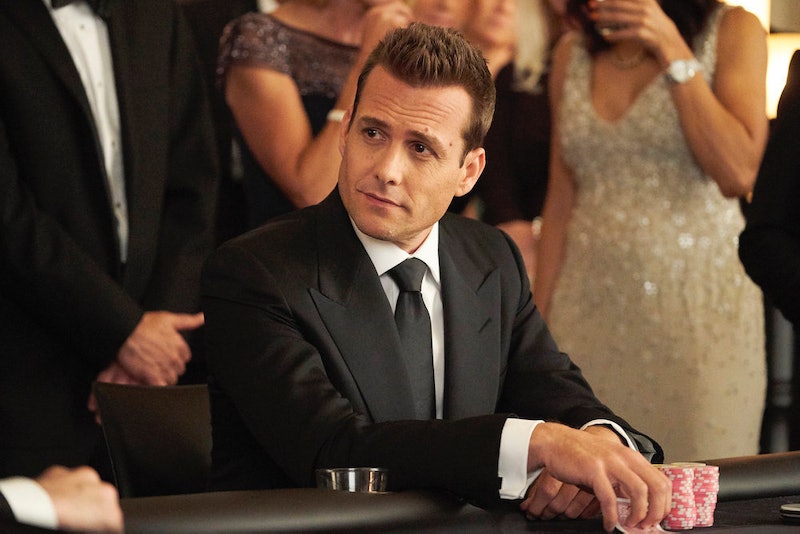 The end is coming for Suits on USA. After its Season 8 finale, there's only one more season of high-powered lawyer drama left before the show's series finale. And when Suits Season 9 premieres, don't expect to be seeing Meghan Markle anywhere. Creator Aaron Korsh told reporters at TCA that the Duchess of Sussex is probably not going to be stopping by her old stomping grounds to say goodbye.

"We're not currently pursuing asking Meghan Markle to leave her position with the royal family and join us," Korsh said, according to TV Line. "I would love it, but I think [the chances are] pretty close to zero."

Still, that doesn't mean her fictional husband won't show up. Patrick J. Adams played Mike Ross — one of the show's central characters — up through his Season 7 exit. But the show left the door open for his possible return, and the series' final season seems like the right time for such a move.

"As of this minute I don't know which of our old original cast will be back and which won't because we're so early in the season," Korsh told Deadline in January. "[But] you can't contemplate it without contemplating bringing Mike back. We're contemplating it and we'll see where we land, and how Patrick feels."

In the same Deadline interview, Korsh said he's also open to bringing back some smaller characters like Forstman, Travis Tanner, Trevor, and Jenny. But he's not going to go overboard with the cameos in Season 9. "If all you do is bring back old favorites you'll never push the story forward, so you really have to pick and choose and we certainly will be doing that," he said.

According to another Deadline article, Suits' final season will be 10 episodes long — down from its usual 16-episode order. When it ends, it will be the longest-running original scripted USA series at 134 episodes. Korsh has said he's had this ending plan in mind since Season 6 wrapped, so it will hopefully bring the closure that fans need. But it won't necessarily be a full-on happy ending, Korsh warned to Deadline.

"Rarely, if ever, have we done a full-on happy ending for all [of the characters] or a full-on sad ending for all of them ... Oftentimes we give with one hand, take away with another or have a bittersweet ending," Korsh said. "I haven't figured out how every one of [these characters] is going to end up, but what I can say is there's no chance the series is going to be ending on a horrible ending, with tremendous sadness. It will probably end with some happiness and some sadness."

If the series finale leaves you too sad, though, at least you'll be able to see Jessica Pearson back on your screen soon in her spinoff Pearson. According to Entertainment Weekly, it's due to premiere later this year and will follow Jessica's experience with the "dirty world of Chicago politics."

Until then, know that Korsh values you, the fans, so much for helping make Suits the success it was. It's the viewers who helped get it to these nine seasons and that longest-running record, and Korsh is forever grateful. According to E! News, Korsh released a statement to that effect. It reads:

"To the fans who have stuck with the Suits family through thick and thin, through can-openers and flashbacks — thank you for always speaking your mind. Without you, I might start to think I'm getting the hang of this writing thing. And once that happens, nobody wins. I look forward to enraging and hopefully sometimes delighting you with the final episodes."

Every season of Suits has premiered in June or July, so this one shouldn't be any different. Expect the gang to be back this summer to deliver their closing statements one last time.