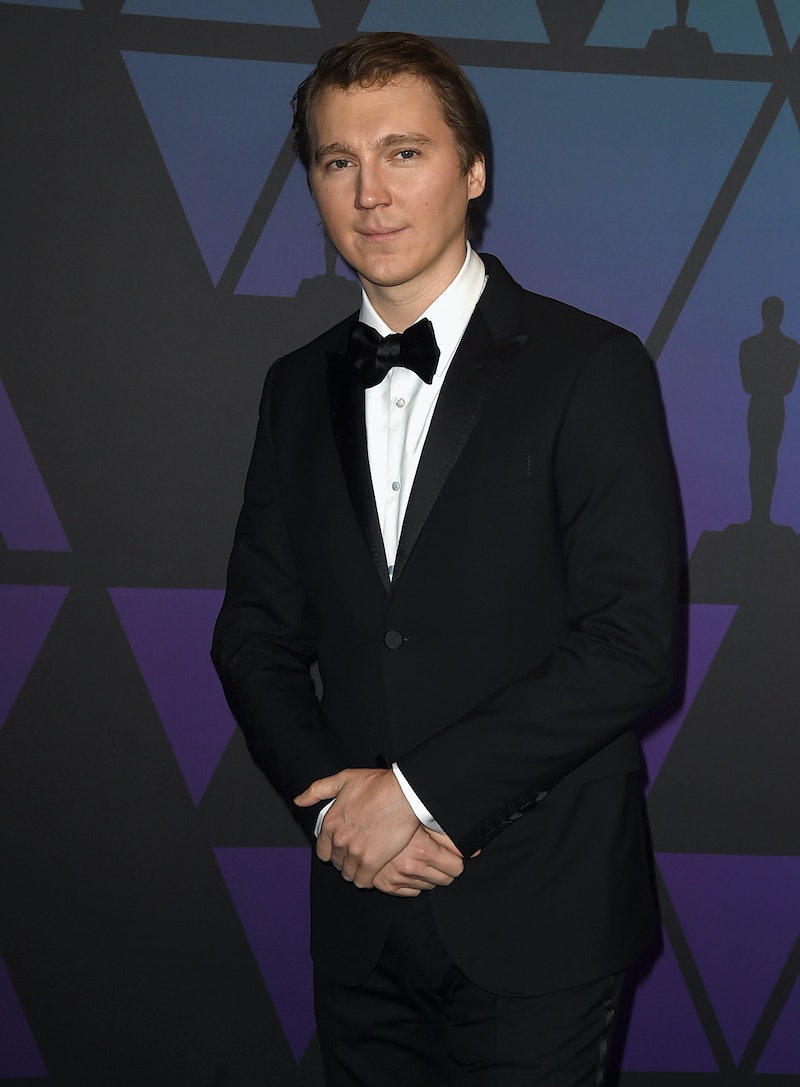 Riddle me this: Is it true that Paul Dano will play the Riddler in The Batman? According to a report from Variety published on Thursday, Oct. 17, possibly. Dano is reportedly eyeing the roll of the villain in the upcoming Robert Pattinson led Batman film.

Though it's not a done deal just yet, sources told Variety that Dano is "in talks" to join director Matt Reeves' superhero movie. It's believed that he's up for the role of The Riddler, but as of now, the studio hasn't confirmed whether this news is true. Bustle reached out to representatives of both Warner Bros. Pictures and Dano, but did not receive an immediate response.

However, his partner Zoe Kazan might have confirmed the news with her latest retweet. Or at the very least, she's added to the intrigue. Without commenting herself, Kazan shared a fan's response to a Variety tweet stating Dano is "in talks to play The Riddler in new Batman." The user @SuperYakiStuff responded to Variety with a GIF of Leonardo DiCaprio in Django Unchained. "You had my curiosity," DiCaprio's character states in the image, "but not you have my attention." And now, Kazan's got the attention of the entire internet.

It's why it's hard to ignore her liking a tweet from The Blacklist founder Franklin Leonard, stating, "And prayers up for @zoeinthecities if he goes method." Especially since Dano isn't on Twitter, Kazan's Twitter may hold the key to solving this puzzle.

This isn't the only bit of Batman casting news that dropped this week. On Wednesday (Oct. 16), Deadline reported that Jonah Hill, who was also rumored to play the Riddler, ​passed on the film. Last month, the publication reported that Hill was looking to put his own dramatic spin on either The Riddler or The Penguin. But, now he is officially out, leaving room for Dano to take on the presumed role.

Most recently, Jim Carrey played The Riddler in Batman Forever providing a bit of comic relief to the 1995 film when he wasn't straight up terrifying Gotham City. His Riddler was criminal genius Edward Nygma who was rejected by Bruce Wayne leading him to turn evil. His M.O. is leaving clues for Batman to solve. According to The Hollywood Reporter, Dano's Batman character is named Edward Nashton, "the man who in the comics later goes by the name Edward Nygma."

If Dano officially joins the movie, slated to hit theaters in June 25, 2021, he will be joined by Zoé Kravitz, who is playing Catwoman in The Batman. With all these villains around, Pattinson's Batman better check the locks on that Bat Cave of his.

More like this
Everything You Need To Know About The 'Knives Out' Sequel
By Grace Wehniainen
Chris Hemsworth Joked That Baring His Butt In ‘Thor: Love And Thunder’ Was A “Dream”
By Brad Witter
The 'Hocus Pocus' Sequel Finally Has A Release Date & It Makes Total Sense
By Shannon Barbour and Radhika Menon
Everything To Know About 'The Hunger Games' Prequel Movie
By Grace Wehniainen and Radhika Menon
Get Even More From Bustle — Sign Up For The Newsletter