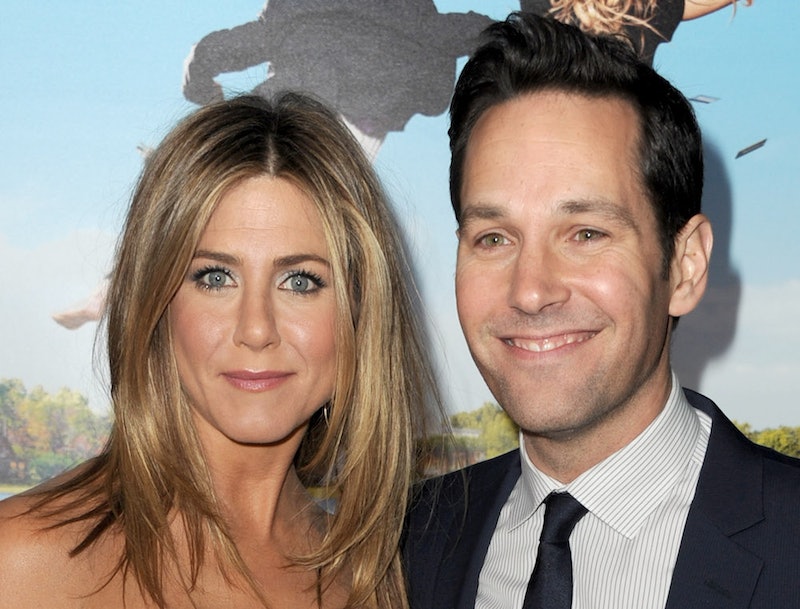 In an episode of The Graham Norton Show, Paul Rudd detailed an encounter with Friends co-star Jennifer Aniston that made him panic about the future of his job. Rudd played Mike Hannigan for two seasons on the hit NBC sitcom, opened up to Norton during an Oct. 11 appearance about an awkward moment he had with Aniston on his first day on the set of the sitcom, which he joined in 2002 during Season 9.

"I was on set for my first episode and Jennifer was on a Segway because she had broken her toe, and everyone was marveling at it," Rudd said in the interview, as per Entertainment Tonight. "Matt LeBlanc asked to have a go and immediately knew how to do it. I then asked to try it too." Rudd then explained that during his stint on the Segway, he rolled over Aniston’s foot. “The producers' look of panic was as if to say, 'Is it too late to fire him? Has his character been established yet?' I felt awful. Such an inauspicious start."

The disastrous moment would not mark Rudd’s only awkward encounter with Aniston. Rudd also recalled a time to Norton in which he attempted to break the ice when he accidentally caught an emotional Aniston crying on the soundstage toward the end of filming the series. “I went over and said, 'Well, we did it, what a ride,'" he told Norton. "The joke inevitably fell flat."

Still, Rudd called his experience on the sitcom, which celebrated its 25th anniversary in September, “an incredible thing to be part of.” Rudd depicted Phoebe Buffay’s (Lisa Kudrow) love interest and later, husband, Mike Hannigan in Season 9 and 10, which aired between 2002 and 2004. Prior to his stint on Friends, Rudd starred opposite Aniston in the 1998 dramedy The Object of My Affection as her character's best friend. The two co-starred as a married couple in the 2012 comedy Wanderlust after Friends ended.

Rudd’s Friends anecdote is one of many times the actor has fondly reflected on his time on the hit NBC sitcom to the press. In an interview with ET on April 12, Rudd compared the experience of filming Avengers: Endgame to that of Friends because he worked with famous actors in iconic roles on both sets. "I had never been a part of anything that had that kind of viewership," Rudd said of Friends. "Everybody was very nice, but I never could quite get over the fact that I was sitting in Central Perk.”

Since his role on Friends, Rudd has starred in blockbuster hits such as the Ant-Man and the Avengers franchise. However, his stint as Mike Hannigan still very much resonates among fans. In an interview with Good Morning America back in June 2018, Rudd dished on the one Friends question he’s still frequently asked by fans. He told Robin Roberts, “Sometimes I'll get, 'How's Phoebe?’” A question that seems to indicate that his Friends character has not been forgotten by fans.

More like this
'Abbott Elementary' Fans Probably Missed This 'Parent Trap' Easter Egg
By Sam Ramsden
At 28, Debra Jo Rupp Was Living A Much Different '70s Show
By Grace Wehniainen
Raven-Symoné Addressed Fan Pushback To Her Name's Actual Pronunciation
By Stephanie Topacio Long
'Friends' Star Maggie Wheeler Offers Support To Matthew Perry After Reading His Memoir
By Alyssa Lapid
Get Even More From Bustle — Sign Up For The Newsletter
From hair trends to relationship advice, our daily newsletter has everything you need to sound like a person who’s on TikTok, even if you aren’t.