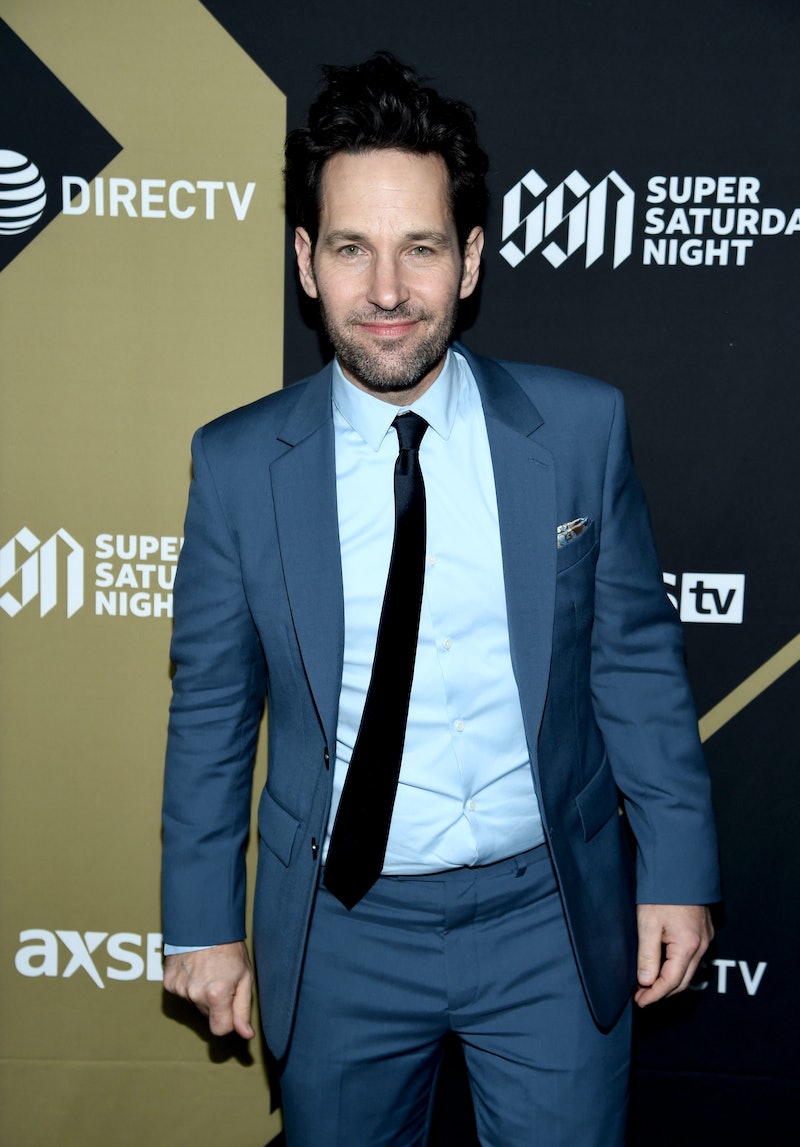 Paul Rudd's career has had some serious longevity. But more than that, his face has had some serious longevity. How is it possible that he still looks exactly the same now as he did in Clueless, which came out almost 25 years ago? Apparently, the actor has an answer to that one. According to the Chicago Tribune, during a panel at the 2019 Chicago Comic and Entertainment Expo on Saturday, Rudd responded to claims that he never ages, proving that he is totally in on the joke.

The idea that Rudd has somehow been able to hold onto his youth has been going around for awhile. Yes, he is 49 years old, and he was only 26 when Clueless hit theaters — and one of the oldest members of the main cast — but he's managed to age incredibly well since then. And according to the Ant-Man star, there's a reason for that.

"I'm 80 years old on the inside," he said when someone at the panel asked him his secret for looking so young, and he pointed to his chest. "In here, pure darkness — and a little moisturizer."

OK, so the pure darkness is a little questionable, but the moisturizer makes a bit more sense. Of course, Rudd would need to have a good skincare routine going to maintain a youthful appearance. Can we get a product list, please? What does he use? CeraVe? Drunk Elephant? We all need to know.

Rudd's youthful appearance has been something people have been pointing out for years, and it's become a bit of a Twitter phenomenon. It makes sense; Rudd has definitely managed to continue looking young for a pretty long time, so of course people are pointing it out — and of course, they want to know what his secret is.

But his response to the jokes wasn't even the most exciting part of the panel at Saturday's expo; that honor belongs to the fact that it happened during the Clueless reunion that was taking place, and Rudd's former costar, Donald Faison, was kind enough to come through for fans who couldn't be there and shared a photo on Instagram. In the pic, he posed with Rudd, Alicia Silverstone, and Breckin Meyer, captioning the photo, "Rollin' with the homies."

And just in case you were wondering, during the panel, the cast said that there hasn't been any serious talk of a reunion, according to the Chicago Tribune, which is a bummer. But on the bright side, Rudd said that he believes that Josh and Cher would still be together today, adding, "and we would still be kind of related," so at least there's that.

Only time will tell if Rudd continues to halt the aging process with his 80 year old soul and skincare routine, but for now? So far so good. But in 2069, when he's 100, if he still looks like he did in Clueless? Well, maybe that's when we should start getting science involved.