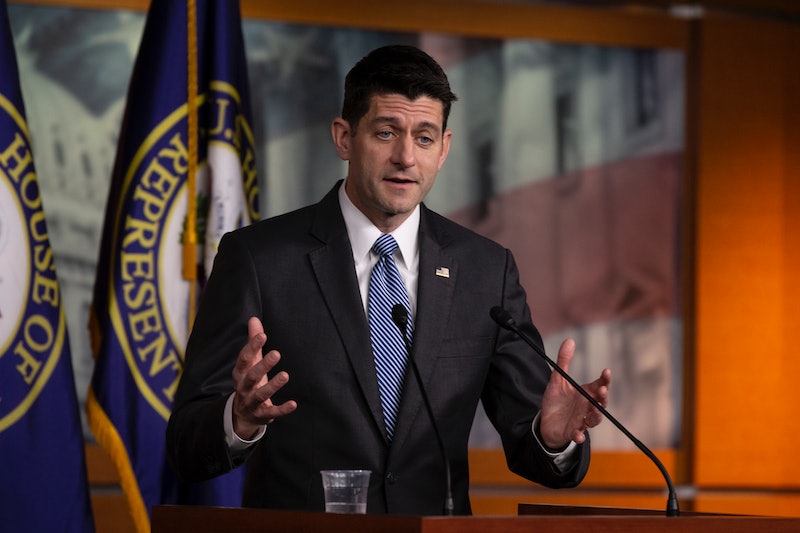 During what was supposed to be a pretty serious conference, House Speaker Paul Ryan weighed in on that Laurel vs. Yanny debate and you can bet he has thoughts. The out-of-the-blue-comment came towards the end of the conference, where he mentioned that he was working with the White House on some immigration measures that would win the president's support. He didn't, however, provide any details as to what steps were being taken.

“I’d like to declare something that is just so obvious,” Ryan began, “It is Laurel and not Yanny, alright?”

Lucky for you, you can re-watch the moment in a video. Though the house speaker laughed, his joke didn't seem to immediately land with the audience. Still, he did get at least a few laughs out of those in attendance. But House Majority Leader Kevin McCarthy, who is standing behind Ryan in the video, made it clear he wasn’t on board, saying, “Someone heard Laurel?”

Much like “the dress” controversy before it, an audio clip of a woman speaking has gone viral with some listeners claiming that they hear her saying “Yanny” and others saying that they hear “Laurel.” According to an article published by Wired, the Laurel vs. Yanny debate began with a teenager.

Katie Hetzel, a Georgia teen, was studying for a literature class and “laurel” was one of her vocabulary words. While looking it up on Vocabulary.com, she played an audio clip to hear the pronunciation. However, instead of “laurel,” she heard “yanny.”

“I asked my friends in my class and we all heard mixed things.” Hetzel told Wired. She posted the clip to her Instagram story, and later another student at her school posted it to their Instagram story with a poll. Then, a Reddit user took the clip from Instagram, put it on the website, and from there it went viral.

Some think that the clip was computer generated, but the voice heard belongs to an opera singer who recorded the clip in 2007 for the site according to Mark Tinkler, CEO of Vocabulary.com. Tinkler explained to Wired that when the site first launched, "they wanted to find individuals that had strong pronunciation, and could read words written in the international phonetic alphabet, a standardized representation of sounds in any spoken language."

There is a reason, however, for why people hear different words when they hear the clip. Lars Riecke, an assistant professor of audition and cognitive neuroscience, calls it an “ambiguous figure” in an interview with The Verge.

“It’s a little bit noisy so that itself causes perception to be a little more ambiguous,” Bharath Chandrasekaran, a professor of communications sciences and disorders, said in an interview with The Verge. “Because it’s noisy, your brain is filling in with what it thinks it should be.”

Even though the New York Times has created a tool that allows readers to hear both Laurel and Yanny, people are still going back and forth over what's being said in the audio clip. And Twitter users have had an absolutely field day trying to figure out what the clip is saying.

Ryan's weighing in on the Laurel vs Yanny debate during a news conference isn't the first time he's brought pop culture to politics. Last year, he proved that he knew how to "dab" by whipping the gesture out during a CNN Town Hall. Who knows what reference will come next.