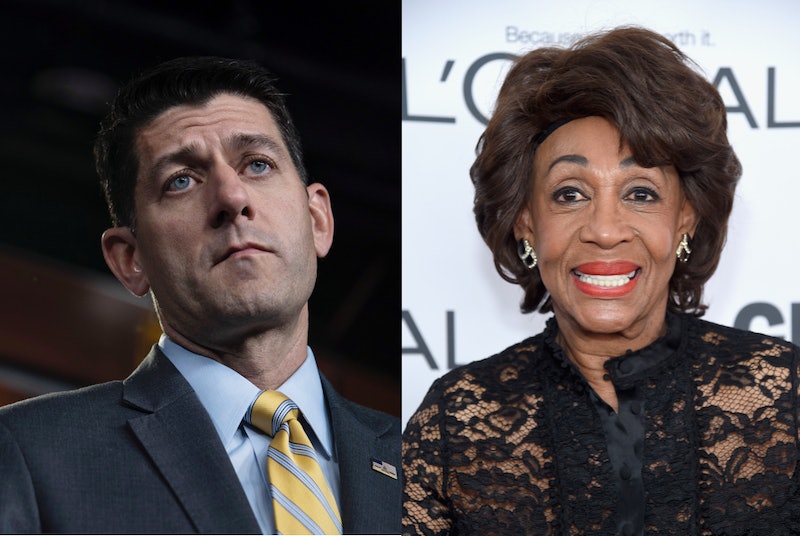 On Tuesday, Speaker of the House Paul Ryan said Rep. Maxine Waters should apologize for encouraging people to confront Trump officials when they come across them in public. Though Ryan's rebuke was unsurprising in itself, some on Twitter were quick to compare them to the much more tepid response he issued to Rep. Steve King, retweeted a Nazi-sympathizer. Many of those who noticed the difference in tone were less than enthused.

"So where is @SpeakerRyan's formal call, in front of cameras for Steve King to apologize like Ryan demanded today with Maxine Waters?" asked one Twitter user.

The person King retweeted earlier in June is a man named Mark Collett. According to The New York Times, Collett is the former chairman of the youth division of a far-right British National Party. He has for years been known to make incendiary, flagrantly nationalist remarks, and was once featured in a 2002 documentary called Young, Nazi and Proud.

After King retweeted Collett, Ryan lightly criticized him. "The speaker has said many times that Nazis have no place in our politics, and clearly members should not engage with anyone promoting hate," his spokeswoman, AshLee Strong, told The Daily Beast, when asked about the difference in his responses.

As for Waters, Ryan's criticism stemmed from statements she made at a rally over the weekend. "You push back on them and you tell them they're not welcome anymore, anywhere," Waters said of Trump officials. Her comments were an indirect reference to several recent incidents wherein administration members became objects of protest while they were engaging in regular activities, like going out to eat.

In response, Ryan said that Waters should apologize. “There is no place for this. She obviously should apologize," he told reporters, according to The Hill. He continued:

Many on Twitter were less than enthused about Ryan's formal rebuke against Waters. "Also Paul Ryan Ryan found time to rebuke Maxine Waters but not Steve King, who literally retweeted a neo-Nazi ¯\_(ツ)_/¯," wrote user @andreagonram.

Many appeared to simply call it as they saw it. "Paul Ryan will make a public statement against Maxine Waters but avoids a public rebuke to Steve King," wrote one user.

But by and large, critics appeared very angry at Ryan's decision to selectively speak up.

"So @SpeakerRyan freely admits he’s calling out Democratic Rep Waters for urging protests but refuses to call out Republican Rep King for openly sharing brazen Nazi sentiments. Sure seems reasonable," said one user. "History will not be kind Paul. We will never forget your cowardice."

Ryan, for what it's worth may not have much to lose, professionally. He has long since announced that he is not seeking reelection in November. He plans, instead, to devote more time to raising his children. Still, as Speaker of the House, his actions do have consequences — it's midterm season, and all eyes are on Washington.