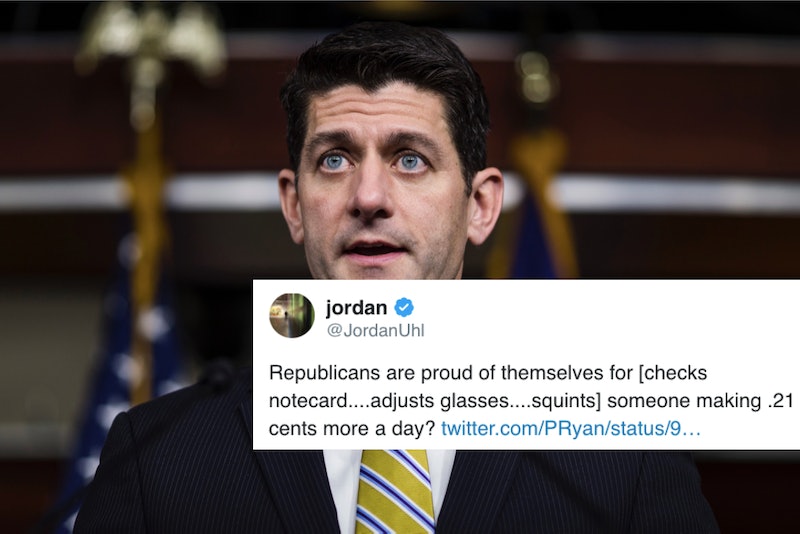 In the thick of the weekend and with the Super Bowl nearly upon us, it's easy for some of the political news of the day to slip through the cracks. But if you didn't notice what was going on with the Speaker of the House on Twitter on Saturday, you really missed out. Basically, Twitter ruthlessly mocked Paul Ryan for a deleted tweet about the GOP's tax cuts, one that many criticized for being stunningly tone-deaf.

On Saturday morning, Ryan (or a member of his social media staff) tweeted out the following message, intending to tout the positive effects of the tax cut package passed by Republicans late last year. "A secretary at a public high school in Lancaster, PA, said she was pleasantly surprised by how her pay went up $1.50 a week ... she said [that] will more than cover her Costco membership for the year," the tweet said.

Multiple analyses have shown that the bill's biggest impact is a huge redistribution of wealth into the corporate and upper classes, but Ryan and the GOP have been trying to combat that perception by highlighting individual stories and anecdotes.

One such story, which was highlighted in Ryan's tweet, regarded a high school secretary who realized she could pay her whole year's Costco membership thanks to the $1.50 per week extra ― that's about $6 per month, or $78 per year ― she now makes. The tweet has since been deleted, but thankfully, screenshots endure.

Suffice to say, the denizens of social media were not very impressed with Ryan's enthusiasm for the story. Here are some of the sharpest, funniest reactions.

The GOP tax bill was passed by Congress and signed into law by President Donald Trump on Dec. 22, 2017.

Not to belabor the point, but $1.50 a week is a shockingly small amount of money to brag about providing to working people.

Ryan has long been regarded as one of the GOP's most strident budget-cutters and deficit hawks, but that didn't stop him from backing upper-class tax cuts that will boost the deficit by more than $1 trillion.

4. Republicans Are Proud Of Themselves

The GOP has strenuously insisted its tax cuts are actually a boon to the middle class, even though its most significant impact is on the already wealthy.

5. What They Really Think

Hawaii senator Brian Schatz is one of the more prolific members of Congress as far as social media is concerned.

The GOP has been taking aim at government-subsidized birth control for years.

7. Three And A Half Months

8. Show Paul Ryan What You Think

Ryan's Democratic challenger in his 2018 House race, Wisconsin ironworker Randy Bryce, pounced on the tweet as a fundraising opportunity.

10. Fresh Off Of Defrauding Millions

The federal reserve has forcibly restricted Wells Fargo's growth for the next year, as punishment for a reported scandal involving millions of fraudulent bank account openings and credit card applications. Wells Fargo also paid out a $185 million settlement over the scandal in 2016.

To believe $1.50 a week is worth getting worked up over is bad enough on its own. To tweet about it thinking over people will approve is entirely another.

In short, Ryan's social media gaffe earned him a tremendous amount of derision and mockery this weekend, so much so that he clearly decided to pull the plug and delete the tweet. Here's hoping next time, he or his social media staffers catch wise before hitting "send."