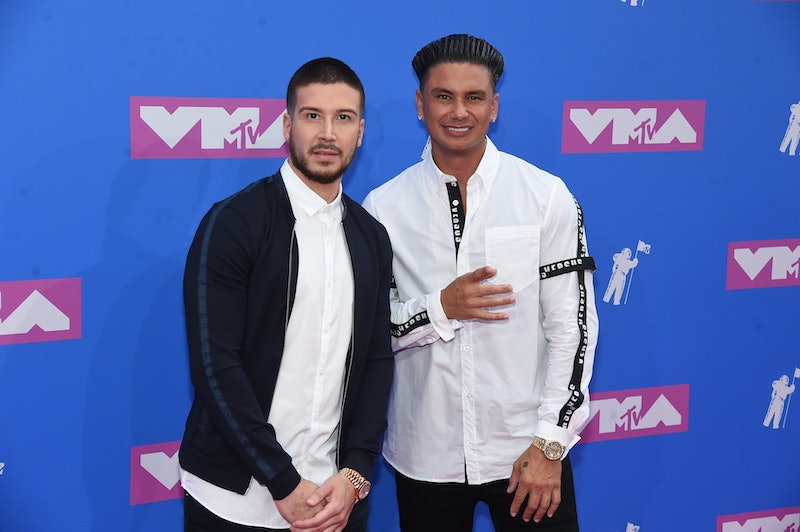 The bromance continues! MTV recently dropped a promo for their new reality dating show and it's sure to give Bach Nation fans all the feels. The trailer for Jersey Shore alums DJ Pauly D & Vinny's Double Shot At Love, notably a spoof of ABC's uber-popular series The Bachelor, features all the hallmarks of a dating reality show promo, including drinks, tears, and nonstop drama. That said, it appears the guys are ready to get back to their bromantic shenanigans following their 2018 stint on the Jersey Shore sequel, Jersey Shore: Family Vacation.

If the dating show and synopsis begin to feel a bit familiar, it's definitely for good reason. The network's original version of Double Shot at Love aired for one season in 2008–2009 and starred bisexual twins Erica (Rikki) and Victoria (Vikki) Mongeon as they searched for love amongst a contestant pool that featured 12 men and 12 women.

This time around, the franchise, which is an offshoot of A Shot at Love with Tila Tequila, will feature 20 contestants, and follow as they attempt to win the hearts of reality show vets Paul Delvecchio and Vinny Guadagnino. In return, Pauly and Vinny will face off against one another as they both compete for the women’s affection.

It seems that Pauly, 38, could definitely serve as the perfect guide for Vinny, 31, as he attempts to navigate the reality dating scene given that Pauly is no stranger to finding love on the small screen. The DJ notably met his ex Aubrey O’Day on the E! network's relationship rehab series Famously Single. People also reported that he appeared on the MTV dating series Game of Clones earlier this year.

Although the show has been done before, there's no doubt that the guys will be putting their own spin on things when they take on Double Shot At Love with DJ Pauly D and Vinny. In the trailer, Vinny plays on The Bachelor's rose ceremony theme, asking, “Will you accept these bros?” as he holds up a rose bearing the colors of the Italian flag.

MTV's synopsis of the show, which is set to air on April 11, asks:

"Pauly D continues to tour the world as a DJ while holding down a Las Vegas residency, but are any of the contestants ready to keep up with his luxurious lifestyle? Meanwhile, Vinny is ready to get back into a relationship, but will the Staten Island keto-guido find someone to take home for Sunday family dinner? Stay tuned."

E! News additionally provided the names and photos of the upcoming show's 20 contestants, whose ages range from 24 to 37 — many of which can been seen throughout the show's recent sneak peek. Fans following the show's official Instagram page can also get updates on the series, while also catching an inside look into Pauly and Vinny's undeniable chemistry with one another.

With a trailer so jam packed with excitement, it's hopeful that Pauly and Vinny will actually find love within their new bachelor pad. And if things, for some reason, don't work out with the ladies on Double Shot At Love, they, at least, still have each other.