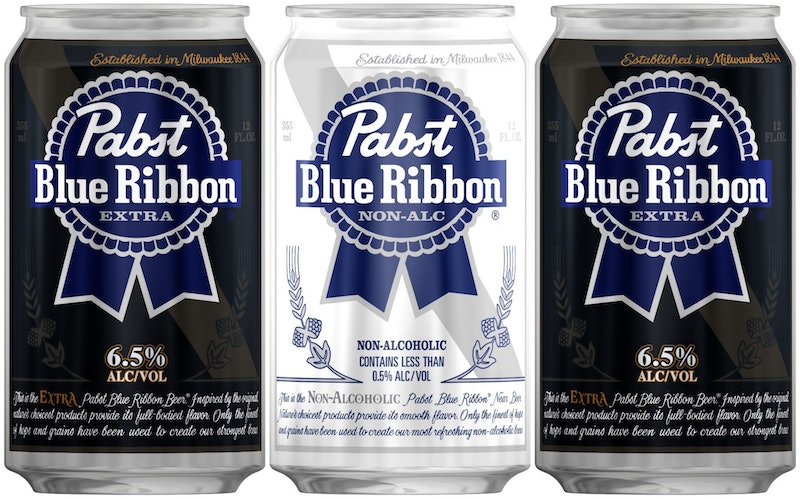 Hipsters of the world, get ready for your nights out to get shaken up: Pabst Blue Ribbon is rolling out two new beers — one that’s stronger than regular PBR and one that’s actually completely non-alcoholic. Called PBR Extra and PBR Non-Alcoholic, the beers reportedly began arriving in stores at the end of March. You might still have to wait a while until you can get a hold of them — I came up short in my area using the PBR product locator — but you can already search said product locator specifically for the new products, so if they’re not available where you are yet, odds are they’ll be arriving soon.

Pabst announced the new beers on April 2 (likely so as to avoid any erroneous assumptions that they were part of an April Fool’s joke), citing both the brand’s 175th anniversary and the “demand [for] great tasting products with flexibility and options for a range of lifestyles” as the impetus for the items. Accordingly, Pabst is planning on rolling out a variety of new products throughout 2019. “Whether you want something bigger and bolder from your beer, or a great tasting non-alcoholic option to consume with friends, Pabst Blue Ribbon has you covered,” notes the press release.

Typically, PBR has an ABV of 4.74 percent, which is right in line with the industry standard — according to Alcohol.org, an ABV of between four and five percent is what we can expect from most beers made by larger, often corporate-run breweries and brands. Craft beers, meanwhile, tend to aim for slightly higher ABV percentages, usually coming in at around six to eight percent, and sometimes even as much as 12 to 14 percent.

PBR Extra will bring the classic brew’s ABV up to something more akin to craft beer percentages, coming in at 6.5 percent. The press release describes it as “light,” “crisp,” “upbeat, “full bodied,” and “refreshing” — something with a bit more kick to it that’s also not quite as heavy as some beers with higher ABV percentages can be.

PBR Non-Alcoholic, meanwhile, goes the opposite direction: It removes the alcohol from PBR entirely, leaving the hoppy taste of regular PBR without the accompanying buzz. According to the 2015 National Survey on Drug Use and Health, 86.4 percent of people over the age of 18 have had alcohol at some point in their life, while 70 percent have had it sometime in the past year; however, only 56 percent reported that they had had it in the past month — meaning almost half of Americans don’t really drink alcohol on a regular basis. (It’s true that problem drinking is rising in some demographics, according to a 2017 study, but the fact remains that there are plenty of people who just don’t drink.) But that doesn’t necessarily mean that people who don’t drink don’t still like the taste of beer — so having non-alcoholic versions of existing favorites can be beneficial to a lot of folks. It’s always good to have options.

Each of the new beers keeps with PBR’s solid visual brand identity, arriving in a variation on the brand’s classic can design: The boozier version swaps out the silver background for a black one and eliminates the red stripe, while the non-alcoholic one keeps the silver background while also jettisoning the red stripe. There’s no word yet on how much either will cost, for what it’s worth, a 12-pack of regular PBR is usually around $9 or $10; there might be a slight adjustment on either end, but odds are both PBR Extra and PBR Non-Alcoholic will fall within a few bucks of that range.

This isn’t the first new product Pabst has rolled out recently — or even the first new beer. News leaked just a few weeks ago of an upcoming whiskey on the way from the brand; believed to be a white whiskey, its claim to fame is having been aged for only five seconds — literally. Meanwhile, back at the end of 2018, PBR Easy arrived on the scene, offering a lighter version of Pabst Blue Ribbon with a reduced ABV of 3.8 percent.

Clearly there’s a lot on the horizon for Pabst, so put on your hipster glasses, get your fixie up and running, and get ready for more!