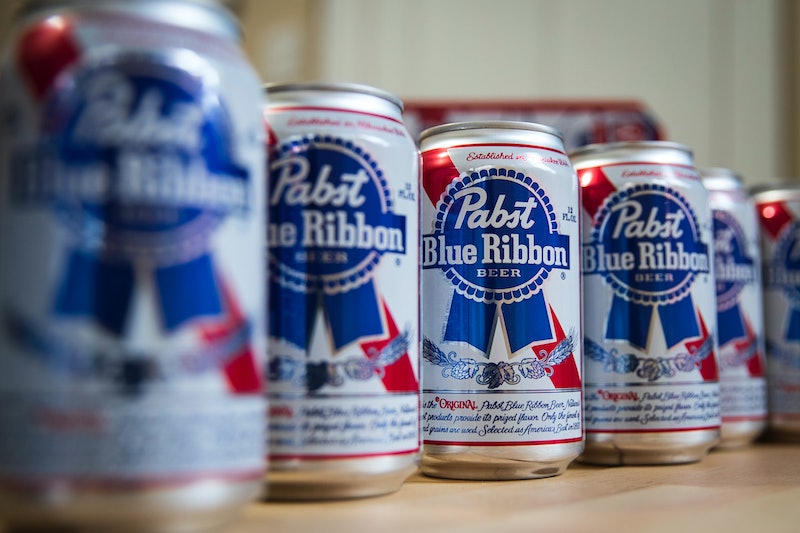 Gird your loins everyone: Pabst Blue Ribbon, ironically beloved brew of hipsters and dive bars everyone, is getting ready to release its own whiskey. Yes, really: PBR whiskey is on the way. What’s more, it has apparently only been aged for five seconds, which is honestly one of the most on-brand selling points I’ve ever seen anyone carry off. Of course a PBR-branded whiskey would only have been aged for five seconds; it’s PBR-branded whiskey. It all makes perfect sense, no?

The whiskey hasn’t been officially announced yet; however, the news leaked early at the end of last week due to the whiskey’s label already being public record. Explained Food and Wine, “Booze brands are required to get their labels approved by the Alcohol and Tobacco Tax and Trade Bureau, and when they do, those labels become public record. As a result, they’re sometimes dug up by enterprising reporters earlier than a brand expected — which is exactly what happened with Pabst Blue Ribbon Whiskey.” A spokesperson for Pabst subsequently confirmed that the whiskey was on the way, because, I mean, what else are you going to do? Everybody already knows. May as well come clean, even if the announcement is still forthcoming, right?

Alas, though, additional details are scarce — although you can find a surprising amount if you dig around a bit. We do know, for example, who’s likely to be making the stuff: The federal label approval went to New Holland Brewing Co., according to Michigan-based business news outlet MiBiz, suggesting that New Holland will be responsible for distilling the whiskey to be marketed under PBR’s brand name. (Fun fact: Pabst isn’t a brewery itself these days; it’s a holding company. The actual brewing has been contracted since the mid-‘90s, with the original Pabst plant in Milwaukee having closed in 1996.)

We also have the label itself readily available, which tells us that PBR’s whiskey (not whisky) will have a mash bill of 52 percent corn, 27 percent malted barley, 17 percent wheat, and four percent rye, with the resulting tipple being 80 proof and 40 percent alcohol by volume. The label also makes the aforementioned hilarious proclamation that the whisky has been “aged five seconds.” For reference, your average American “straight” whiskey — a “whiskey distilled to no more than 80 percent ABV, placed in new charred oak containers at 62.5 percent ABV or less,” according to Whisky Advocate — is aged for at least two years. PBR’s whiskey’s five-second aging time therefore stands in pretty sharp contrast to the norm.

A representative further told Thrillist that the aging note is partially to satisfy a legal requirement; said the rep, “The law said it needs to be aged to be called whiskey, so we aged for the perfect time... five seconds… any more means people have to wait too long, any less and it wouldn't be aged to perfection.” Less that point scare you off, though, the rep also noted that PBR Whiskey’s “mash bill and process … produces a flavorful craft whiskey” that everyone “loved … as it was without aging.” (Or without much aging, at least.)

Food and Wine also heard the stuff referred to as a “White Whiskey,” which is, in fact, A Thing: Also known as white dog whiskey, white whiskey is basically a “raw, unfinished product on its way to becoming grown-up whiskey,” as Vinepair puts it. It’s, uh, not to everyone’s taste — it's often likened to moonshine— but again, such a whiskey would be extremely on-brand for something made to be marketed under the PBR label. So, y’know… well done, team.

Anyway, we’ll have to keep our ears to the ground regarding the official announcement — but now that we know it’s coming, at least we can prepare ourselves, right? Get those mason jars ready and put on your most ironic outfit. Something tells me we’re going to need it.