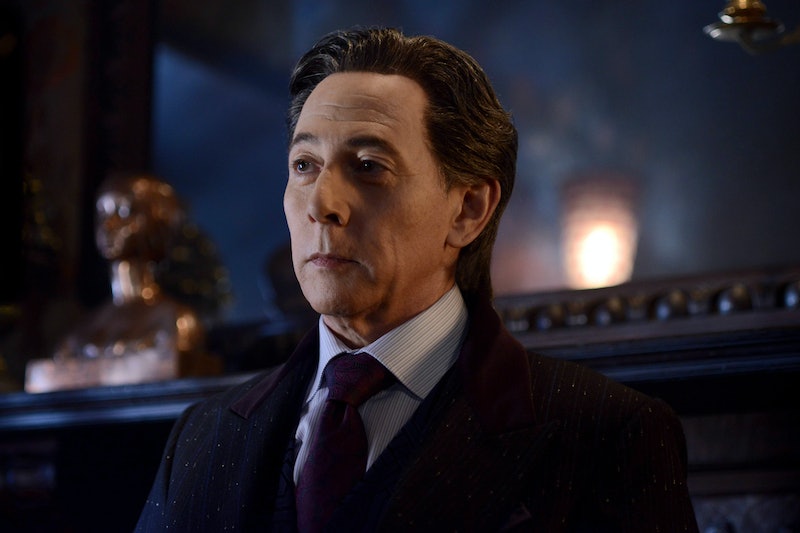 "Does anyone die in Gotham anymore?" Harvey Bullock asks incredulously in the opening moments of the Gotham Season 3 midseason premiere, aptly titled "Ghosts." Considering that not one, but two long dead characters returned in the episode, he's kind of got a point. In addition to Jerome's big reappearance, Paul Reubens returned to Gotham as Penguin's father, Elijah Van Dahl. Of course, once Penguin began coming apart psychologically at the sight of his father, it was clear that this was probably the work of Ed Nygma, but it was still impressive to see just how his revenge plan came together.

Manipulating Penguin into another murder might seem like enough to quash any further political aspirations, but really, considering that the people of Gotham City voted him in after he was already a well-known criminal, that probably won't be what hurts his approval ratings. Instead, the moment when he ill-advisedly abandoned a live TV interview by hissing "forget about the people!" was the more likely final nail in the coffin.

It turns out that Elijah wasn't Penguin's real father, who is actually dead, but a shapeshifter. One thing that I'm still curious about is how this fake Elijah was able to so subtly sneak into the interview room and distract Penguin. Regardless, Ed's plan works, Penguin goes mad, and it seems that the next step will be to take away the "King of Gotham's" empire, which basically means... a couple of goons? Now that Carmine Falcone is back, does Penguin really control the local organized crime? The next few episodes of Gotham should explore this further.

With this level of efficiency, it seems that Ed was actually a crucial part of Penguin's rise, and will bring a lot to the table now that he's part of Team Babs. Before the Riddler joined them, they were still biding their time, occasionally attempting futile resistance against Penguin with schemes like Butch's botched Red Hood Gang. But with Ed in the mix, it won't even be a fair fight for Mayor Cobblepot.