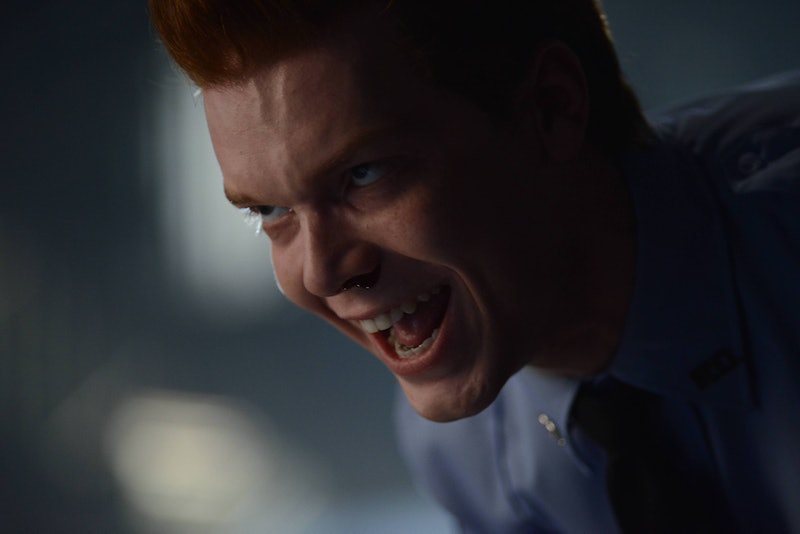 After a winter hiatus that seemed to go on forever, on Monday, Jan. 16, Gotham returns with Jerome, one of its most beloved villains, who is mysteriously making a comeback after being murdered by Theo Galavan at the beginning of Season 2. Until his shocking death, many fans assumed that Jerome would become the Joker on Gotham, and this return suggests that it could still be possible. However, the show's producers have always been secretive about whether or not Jerome is meant to be a take on Batman's greatest villain, and he's hardly the only character to return from death. But that doesn't mean Jerome's return won't affect Season 3 going forward.

Gotham producer John Stephens told TV Guide, "Someone who has basically gone through death and come back to life has a very different point of view. He also has a grander point of view. It's altered how he is. It's odd to say he's more psychotic than he was before." That could mean that Jerome will absorb the messages of the odd, death and laughter-obsessed cult that popped up after his death, who may even look to him as a leader. He was once a circus performer, so he should still love the attention once he's woken up. Perhaps that cult is what will push him to start wearing clown-inspired makeup.

Death and resurrection is actually a trope that has shown up in the Batman comics before. In 1942's "Joker Walks the Last Mile," the Clown Prince of Crime confesses to his many crimes, is sentenced to death, and then gets brought back by his sycophantic henchmen. That roughly corresponds to what happened to Jerome (if you count the future mayor as a stand-in for the electric chair).

While the Joker has had several different backstories over the last 75 years, he's often been transformed physically by chemicals. If that factors into Jerome's return, it may be yet another sign that he's going to eventually become Gotham's Joker.

One major deviation from the established Batman canon is the possibility that Bruce will have met the Joker before becoming the Caped Crusader. He traveled to the creepy Jerome-obsessed club and was even targeted by the madman at the "magic show" where he was killed. Aside from Tim Burton's Batman film, where the Joker was the Waynes' assassin, he's never been a big part of what formed Bruce Wayne's vigilante code.

Basically, whether Jerome is the future Joker or just a red herring is just as unclear as it was when he was assumed dead. But another part of Stephens' TV Guide interview certainly supports the idea that he'll grow into an important role. He told the magazine:

Another brick in that wall [of the Batman philosophy] gets built in episode 14, and it gets built via Jerome ... Jerome being the stand-in for the person we know he probably is out there. it's, for us, really significant that that guy ends up informing this part of Batman's mythology."

Episode 14 is set to air on Jan. 30, so we may have an answer about Jerome's future very soon. But even if Gotham decides to take Jerome in yet another direction, this connection to Bruce's future as Batman is certainly intriguing.