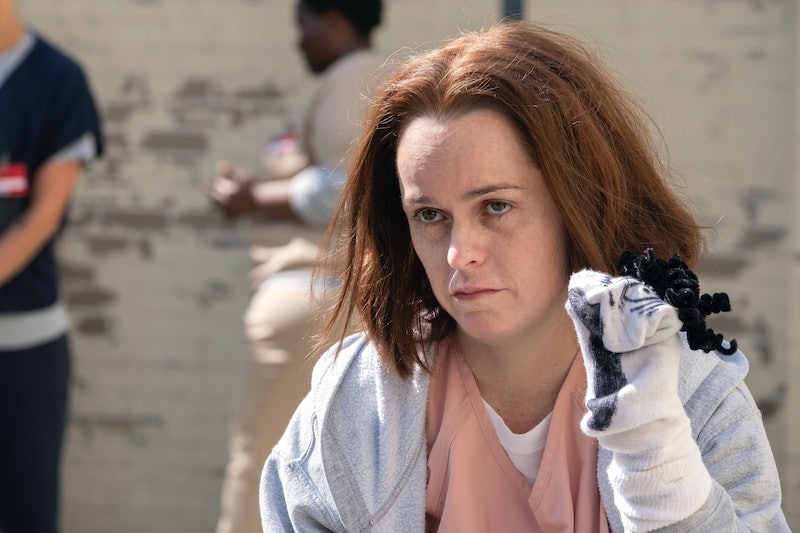 Spoilers ahead for Orange is the New Black Season 7. From prison evangelist to escapee, Pennsatucky's fate in Orange is the New Black has always been kind of up in the air. Throughout the series, she's played the roles of both protagonist and antagonist, but in Season 7, she finally seems to have found some stability. She's living in cushy and quiet Florida (the cell block, not the state), she finds companionship with Suzanne, and she ultimately decides to complete the General Education Development test in place of the diploma she never earned. For a convicted felon, she's doing all right. And then, suddenly, she's not.

In retrospect, Tiffany "Pennsatucky" Dogget's impulsive nature could've foreshadowed her abrupt death. She's in prison because she murdered someone in broad daylight — a result of her fragile temper. Once behind bars, she becomes a religious zealot, preaching to inmates like it's been her life's work. When that fizzles out, she up and leaves prison with a sleazy guard for some gas station junk food, and she's just as quick to change her mind and turn herself in. But Season 7 Pennsatucky seems different, more grown up — so much so that a relapse and overdose seem unfathomable. But that's what happens, and it's heartbreaking.

On her path to a better education, Pennsatucky learns that she's dyslexic, which explains her map-related confusion and tendency to jumble words on paper. With the help of her tutor, Taystee, and her teacher Mr. Fantauzzo, she puts her all into studying for the GED — the perfect, productive distraction as she completes the remainder of her sentence. On test day, she's ready and prepared, but discovers a lazy Luschek has forgotten to request the extra time she needs for her learning disability, so she's forced to blindly bubble in the last few rows on her Scantron sheet.

Feeling stupid and defeated, the old Pennsatucky returns with a vengeance and leads her to the capital of Daya's drug-dealing dynasty: the laundry room, where Daya and her runners are doing drugs. Though Pennsatucky has been sober for a long time, she thinks she flunked the GED and lost her only shot at upward mobility after prison. There's no more room for ambition, but there's all the space for using drugs. Unbeknownst to her, she actually passed the test, and her diploma is in a manila envelope across the prison. But it's too late. Taystee — who thinks she's on her way to take her own life — finds a pale Dogget collapsed beneath the folding table, and it's almost as devastating as watching C.O. Bayley pin Poussey to Litchfield's cafeteria floor. You hope it's not really happening, but unfortunately, it is.

According to the National Institute on Drug Abuse, the relapse rate for drug misuse is estimated to be between 40 and 60 percent. Sadly, the odds were always against Pennsatucky — for getting out of prison, for passing the GED, and for surviving her substance use disorder. That she actually seemed to be beating those odds just before her death makes it all the more devastating.