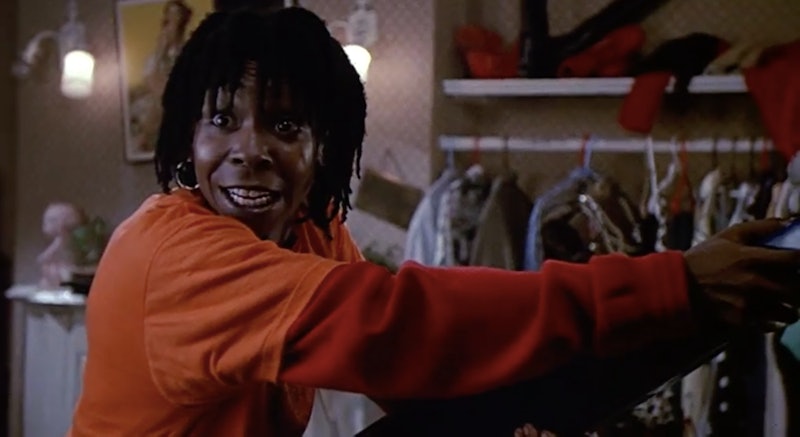 Legendary director and actor Penny Marshall passed away on Dec. 18, and tributes began pouring in: for her work as Laverne on Laverne & Shirley, for her seminal movie A League Of Their Own, and for a life of Hollywood badassery. For me, though, Penny Marshall's death is poignant particularly because of the first film she ever made. It didn't have the big-name cast of A League Of Their Own, or the rampant popularity of later films like Big, but was nonetheless one of the most important films of my childhood. It's called Jumpin' Jack Flash, and if you haven't seen it, you need to immediately — because its brilliant, independent female protagonist taught me a hell of a lot of life lessons, including how to fight off spies with giant toothbrushes.

The 1986 film almost didn't work out: according to IMDb, original directors Burt Reynolds and Howard Zieff both dropped out after six weeks and Marshall, who'd never directed before, was brought on to replace them. The script had four writers and looked generally in bad shape. The star? A young Whoopi Goldberg, fresh off A Color Purple but still years away from the fame of Ghost or Sister Act. She was only 31, Marshall was 43, and they went on to make magic.

I wasn't born till 1988, and by the time I watched the zany spy caper as a child, it was the mid-90s. I was an awkward, bright kid who liked odd-looking clothes and giant books, and idolized the computer whiz Penny from Inspector Gadget. Female nerds were hard to come by on-screen back then, and when we put Jumpin' Jack Flash into the VCR and settled in to watch, it was a revelation.

Goldberg's character, Terry Doolittle, wears ridiculous outfits — think Claudia from The Babysitter's Club crossed with '80s urban cool — with complete panache and confidence. She dances to the titular Rolling Stones song in pajamas, a 10-foot scarf, and penguin slippers. She layers oversize slogan tees over giant sweaters. She acts bonkers and her boss hates it, but she gets away with it because she is intensely good at her job as a computer whiz (get the theme here?) at a bank. So good that when a spy who's been compromised in a foreign country contacts her over the bank's servers, she gets to work cracking his codes, breaking into his apartment, and sorting out the plot that's threatening to kill him — and, eventually, her.

Yes, it's brilliantly strange and uses technology that even by the '90s was out of date, but it was also hugely ahead of its time. Whoopi's character isn't being saved; she's using her smarts, and her wit, to save a dude who doesn't even appear onscreen for more than a few seconds. She fights, and screams, and at one point dresses up to break into an embassy and hack into its computers. She also calls out racism — like, a lot. All her opponents are condescending white dudes, and she, the independent young black woman with a brain, kicks all their asses.

Looking back, I realize that I loved Jumpin' Jack Flash as a child partially because Goldberg's enemies are sexism and male underestimation, in addition to Russian spies. (Topical!) She's scared a lot, but her brains (and physical comedy) get her out of every tight spot. For a shy, nerdy Australian girl like me, it was electrifying. Penny Marshall made a very silly film that nevertheless carried an important message: that a woman who knows herself and trusts her brains will triumph over a world that's designed to thwart her.

Most people will remember Jumpin' Jack Flash as a comedy: Goldberg trapped in a phone booth, dancing in her apartment screaming Rolling Stones lyrics, talking nonsense when she's dosed with truth serum, and hitting people with frying pans. It's the anti-James Bond, but it also had lasting influence on the genre: this is where "female civilian gets dropped into spy world" movies like Spy and The Spy Who Dumped Me came from, but instead of Jason Statham, there's just a young Whoopi fighting with a 6 foot long toothbrush — which she just has in her apartment, because she's amazing.

For me, though, Marshall's legacy with this film was one of personal inspiration. If Goldberg can solve an international conspiracy on her own wearing overalls, I thought, surely it's not so bad to be bright and like weird clothes. I didn't become a spy or a computer whiz at a bank, nor do I have my own giant toothbrush (even though I've tried), but the movie still carries the glow of self-acceptance, and one of my earliest introductions to feminism.