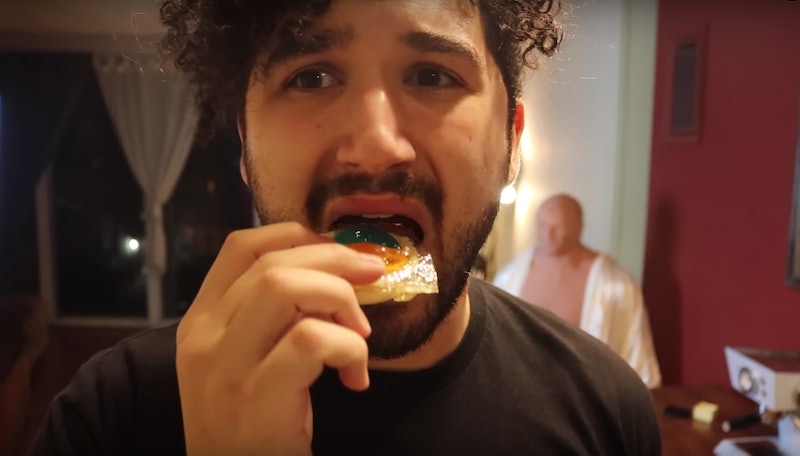 The average grocery store has hundreds of edible, non-harmful foods to choose from, so it confused many people when the "Tide Pod challenge," aka videos of teens popping Tide Pods into their mouths and eating them like candy, became an incredibly dangerous viral sensation. Eating laundry pods is unequivocally a bad and dangerous idea, and YouTube is removing the videos in hopes of stopping the trend from spreading. Tide has also tweeted statements saying it doesn't want people eating Tide Pods because, well, duh. But that hasn't stopped people's curiosity — and now, the Tide Pod fad has taken another bizarre turn. Now, people are creating edible Tide Pod-inspired recipes in response to the dangerous challenge.

I have been rooting for 2018, but we are barely a few weeks in and people are eating poisonous laundry pods for YouTube views. If you are tempted to put a Tide Pod anywhere near your mouth, please don't. You could burn your digestive tract, and it could possibly be fatal. The internet is a strange and scary place, so it is not exactly surprising that people have used the Tide Pod challenge as a reason to create edible Tide Pods in cookie, doughnut, and jello form. Here are five Tide Pod lookalikes that are indeed edible, although anything that encourages people to eat something resembling a Tide Pod is getting a side-eye from me.