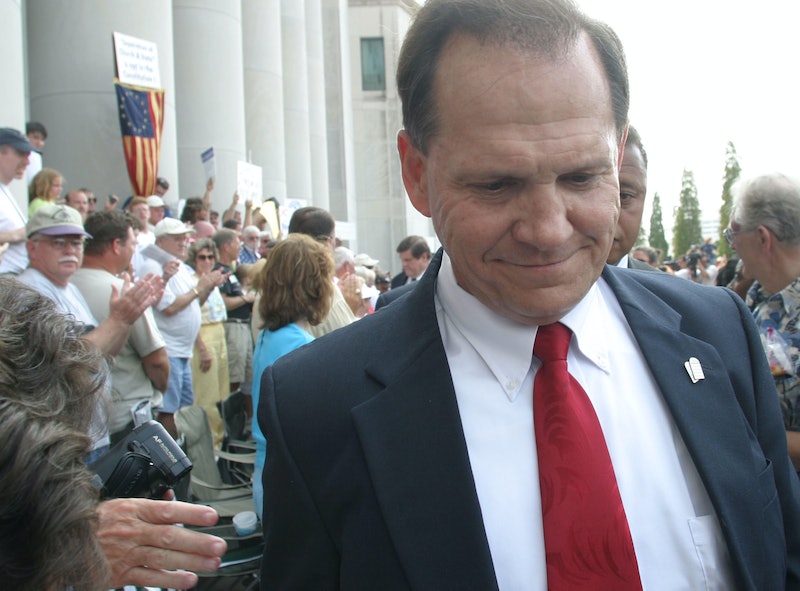 The former Alabama judge who ordered a statewide defiance of the Supreme Court's ruling on marriage equality is receiving blowback of a different kind. Now running as a Republican for the Senate, the avowed anti-gay Roy Moore is being trolled with Facebook's pride button, a new feature it rolled out in June.

As AL.com reported, Moore's Facebook page has been blitzed with people using the pride button, splashing little rainbow-colored dots all over the comments under his posts. It's clearly something he's taken note of, too ― he actually shared a link to the AL.com article about the trolling, notably without adding any further comment.

Moore's Senate run was announced shortly after he resigned from his seat on the Alabama Supreme Court back in April, a move he made after he was suspended from the bench for the remainder or his term. Moore drew controversy and professional censure over his 2016 order telling Alabama probate judges to ignore the Supreme Court's ruling legalizing same-sex marriage, and instead continue to enforce the state's ban on such marriages.

That's just one of many reasons LGBTQ activists and advocates are no fans of his. In the run-up to the Supreme Court's ruling in Obergefell v. Hodges, which legalized same-sex marriage nationally, Moore told the right-wing news outlet CNSNews that such a decision would "destroy the country."

What [the court is] doing is they’re toying with something that’s like dynamite and will destroy our country... there are people who would like to see this country destroyed.

Moore has no qualms hiding his disdain for marriage equality, nor a host of other issues core to the LGBTQ civil rights struggle. He also once concurred with a ruling in a child custody case, deciding against the mother on the basis of her being in a same-sex relationship. Specifically, Moore claimed that the mother's sexual orientation created "a strong presumption of unfitness" on its own, and that homosexuality is an "inherent evil against which children must be protected."

Homosexual conduct is, and has been, considered abhorrent, immoral, detestable, a crime against nature, and a violation of the laws of nature and of nature's God upon which this Nation and our laws are predicated. Such conduct violates both the criminal and civil laws of this State and is destructive to a basic building block of society-the family. The law of Alabama is not only clear in its condemning such conduct, but the courts of this State have consistently held that exposing a child to such behavior has a destructive and seriously detrimental effect on the children. It is an inherent evil against which children must be protected.

In short, Moore is about as anti-gay as any major party candidate you'll find. Which means he probably doesn't appreciate all those little rainbow buttons on his profile ― not that anyone who cares about LGBTQ people's rights and basic human respect is likely to shed a tear.