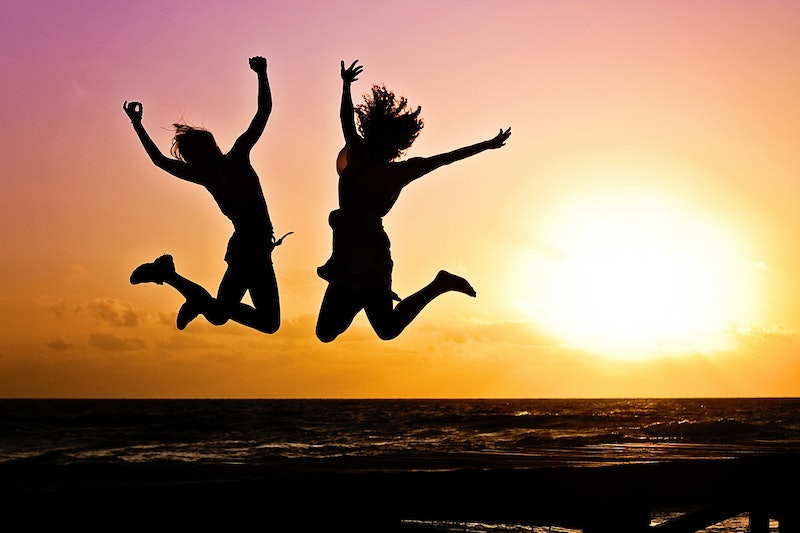 Have you ever wondered how your life would be different if you weren't perpetually five minutes late? Well, you can officially stop feeling bad for never being on time because research suggests that people who are late are more optimistic, and more successful. I will admit that I hate being late, mostly because I don't like to make people wait. And, at the same time I am often five-to-10 minutes late to everything. Go figure. I'm glad I can stop beating myself up about this.

Since I've moved to Los Angeles I've had to adjust my thinking because everyone here is late all of the time. Partially because of traffic, and partially because of the laid-back lifestyle, things hardly ever start on time, and everyone just accepts that's the way it is. If you can't get on board with the late-is-the-new-normal mindset in L.A., you'll probably be pretty cranky and have a lot less fun.

Being on time is so ingrained in our culture that Inc. published an article this week about why you might be perpetually late, and how to get back on track (if you're interested in that). The good news is that a recent article on The Tab reported that being late can be a sign of enthusiasm, optimism, spontaneity, and success. This contradicts everything you've been taught from an early age that being late is rude, and unprofessional. Yet, so many people are late so often that it's worth investigating the benefits of chronic tardiness.

While it's vital to be on time for some things like work, or a flight, there is a good argument for throwing out the clock when it comes to the rest of your life.

Type B Personalities Tend To Be Late, But Are Healthier & More Creative

You're likely familiar with the type A personality, the always-on-time, everything-my-way person who hates it when you're late. Business Insider reported that a study published in the Journal of Applied Social Psychology found that people with type B personalities actually perceive time differently, and tend to be more creative. As part of the study, participants were asked to estimate a period of time.

"After one minute the research participants had to guess how much time had passed," Business Insider reported. "People from subject group type A guessed at an average of 58 seconds while those from group type B thought in average that 77 seconds had passed."

Your Positive Attitude Might Be Making You Late, But You'll Live Longer

Optimistic people tend to think they can fit more into their schedules, and this in turn can make them late more often than their pessimistic counterparts. But, because they think they can do more, they actually accomplish more.

What's more is that another study published in the journal Circulation found that optimistic people tend to live longer than pessimistic people. Maybe that whole power-of-positive thinking cliche has some merit after all.

You Tend To Get Really Excited About Things, Which Is Good

Optimistic, creative type B personality people tend to get really, really enthusiastic about things, according to The Tab. "Those who are often late or disorganized fall into the ‘Enthusiast’ category," Isabella Eckert wrote on The Tab. "The weaknesses include being ‘over-extended, scattered and undisciplined, 'however the positive qualities include being ‘extroverted, spontaneous, high-spirited, and playful.'"

In this instance Eckert is referring to the personality diagram called the Enneagram. Type seven on the Enneagram is the Enthusiast, which is described as a person who wants to maintain their freedom and happiness, avoid missing out on worthwhile experiences (big-time FOMO here), keep themselves excited and occupied, and avoid and get rid of pain.

The Enthusiast is a multitasker who likely has multiple projects, plans, and agendas going at once. The downside to this is usually for others who end up waiting on the over-committed Enthusiast who is pretty likely to be late to dinner.

In general, people get upset when someone is late because they feel like their time is not being respected, and this is totally understandable. However, it's important to note that the Enthusiast or type B personality person means no disrespect by not being on time. If a type A and a type B are planning to meet up, it's a good idea to have a conversation ahead of time to avoid any misunderstandings.

If you're not sure if you're an A or B, you can take a little quiz to find out. In the meantime, if you're chronically late, be honest about it with whomever you're meeting, and rejoice in your health, wealth, and happiness.

More like this
6 Abortion Advocates To Follow On TikTok
By Sara Youngblood Gregory
The UK Abortion Laws In 2022, Explained
By Sophie McEvoy
How To Protect Your Digital Privacy If You Need An Abortion Post-Roe
By Kaitlyn Wylde
Lily Allen Was “Quite Emosh” After Performing Sober At Glastonbury Festival
By Stephanie Topacio Long
Get Even More From Bustle — Sign Up For The Newsletter