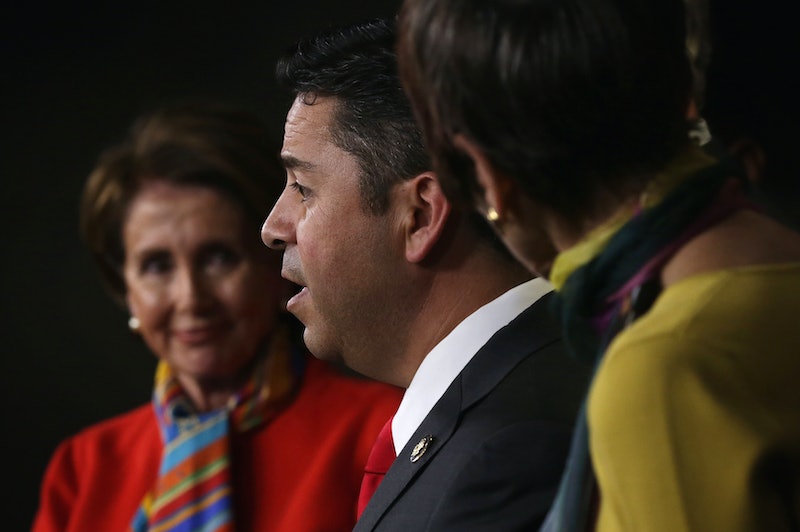 On Monday morning, in an interview published by The Hill, Democratic Congressional Campaign Committee Chairman Ben Ray Luján (D-NM) declared that, in an effort to recruit candidates for the midterm election, a candidate's stance on abortion would not be a factor in whether or not they receive funds from the Democratic Party. “There is not a litmus test for Democratic candidates,” said Rep. Luján. “As we look at candidates across the country, you need to make sure you have candidates that fit the district, that can win in these districts across America.”

We’re exactly a year to the anniversary of the Democratic Party putting forward the most pro-choice party platform, which called for the repeal of the Hyde Amendment which bars Medicaid recipients from accessing abortion care with their insurance, and now, the same party is opening their arms to anti-choice politicians who seek to destroy all the progress made. Rep. Luján’s comments are a slap in the face to those of us who have had abortions.

Seven in ten Americans support access to abortion. Over 3 million more people voted for the most pro-choice candidate in history, Hillary Clinton. Last week, pro-choice Republican women fought to save the ACA. This is not a losing issue. This difficult time demands that elected officials, and the Democratic Party as a whole, stand up for our values, not move to the right. We cannot afford to make that mistake again.

I've seen first hand what happens when anti-choice politicians from both parties get elected — because I'm a Texan, I've had an abortion, and I am an abortion storyteller with We Testify, a leadership program of the National Network of Abortion Funds.

Anti-abortion legislators, both Republicans and Democrats, have essentially taken away abortion access in Texas. Session after session, more restrictions are passed that limit abortion care and shutdown clinics, which make abortion access near impossible.

These ideological stances are never hypothetical. In 2013, Texas passed blatantly unconstitutional abortion restrictions, some Democrats even vocally condemned abortion alongside their Republican counterparts. The law, while eventually overturned by the Supreme Court three years later, passed and had a devastating effect on Texas abortion access that is still felt today. Over half the clinics closed, leaving millions of people of reproductive age without access to abortion.

We cannot wait for more advantageous times for Democrats; we cannot make space for legislation or lip service from any politician who does not consistently stand with us in regards to our basic bodily autonomy, and that includes the words they choose to use around the issues of abortion and healthcare.

We are currently in the middle of a special session in Texas and instead of focusing on the problems that plague our state like economic insecurity, limited access to good education, and health care disparities, the legislature continues to push through more anti-abortion bills that will result in more of the same. We cannot wait for more advantageous times for Democrats; we cannot make space for legislation or lip service from any politician who does not consistently stand with us in regards to our basic bodily autonomy, and that includes the words they choose to use around the issues of abortion and healthcare. We are in a crisis right now, right this second, and we need legislators who do not back down from this historical moment because our lives are on the line.

Unlike Rep. Luján, this isn’t just politics for me. Without my ability to access abortion care, my life would be completely different.

The abortion I had at 25 enabled me to seek the mental health services and support that I needed to function in society. The decision I made, that I have never once questioned, allowed me to finally graduate college, go on to law school, to get married and to have two children when I was healthy and ready.

Like most voters, I don’t necessarily believe in all tenants of the Democratic Party, but I almost always vote Democrat because this is the party that has worked in the past to secure abortion rights and said they would work to guarantee it going forward.

The election of Donald Trump highly intensified an already volatile political climate. His presidency has justified and legitimized hate and discrimination, yet he’s not the only reason abortion rights are crumbling. Anti-choice politicians from both parties are contributing to the disintegration of abortion rights as well; but only one of those parties’ platform reads, we “believe unequivocally, like the majority of Americans, that every woman should have access to quality reproductive health care services, including safe and legal abortion—regardless of where she lives, how much money she makes, or how she is insured.”

We should be working to build platform policies that invite in more of the people who are most affected by the laws in question.

The party I stood by is now leaving me without representation and I do not plan on taking it lightly. People who have abortions are the backbone of this party; we donate, we block walk, we phone bank, we have conversations with our community, and we vote. Women of color vote Democrat at higher consistency levels than any other demographic, with 97 percent of Black women using their vote to support Hillary Clinton’s strong 2016 reproductive rights platform. Women of color are also the people most affected by legislation and stigma that makes abortions harder and more expensive to get.

We are tired of being taken for granted, tired of our votes being traded away to make space for people opposed to our basic humanity, tired of our communities and families specific issues being ignored in the name of a bigger tent. The Democratic Party, and all politicians, ignore us at their peril.