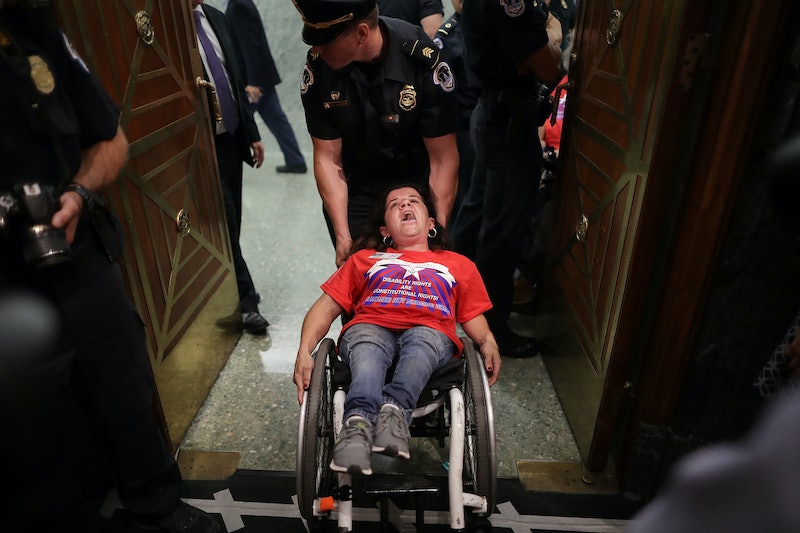 For years, activists, politicians, journalists, and astute observers have pointed out that Black people are disproportionately stopped by the police — but other marginalized identities are at risk for unduly high rates of arrest as well. One researcher wanted to explore the impact of a sometimes-invisible aspect of a person’s identity on their interaction with police officers. Erin J. McCauley, a doctoral candidate in policy analysis and management at Cornell University, analyzed the connection between disability and arrest rates in a new study, and the results are troubling.

"It is pretty commonly discussed that there is an overrepresentation of people with disabilities — especially serious mental illnesses — in our jails and prisons," McCauley tells Bustle via email. "After hunting around in the existing literature, I had a hard time finding studies that explored how common this experience in when looking at those with disabilities as the population instead of those who are incarcerated." In other words, the data on people with disabilities who are arrested simply wasn't there — so McCauley had to go out and find it herself.

The study, which was published in the American Journal for Public Health, found that people with disabilities had a 43 percent probability of being arrested by age 28. Those without a disability had a lower probability (30 percent) of getting arrested by the same age. Researchers in this study included emotional, physical, cognitive, and sensory disabilities in their analysis. The study did not look at arrest rates for LGBTQ people because "there are some serious data limitations which have limited my pursuit of the question," McCauley says.

The results of the study even surprised the head researcher. "I expected to find that people with disabilities would be more likely to be arrested, but I was frankly shocked by how large the disparity was," McCauley stated in a press release. "These findings really point to a problem. For people with disabilities, particularly men of color, the experience of arrest is extraordinarily common. They are constantly exposed to this risk."

McCauley believes that the disparity in arrest rates is due to racial discrimination — and not the type of disability a person has — because disability types were evenly distributed among races. In the study, McCauley calls on police departments to change their tactics. “Police officers should understand how disabilities may affect compliance and other behaviors, and likewise how implicit bias and structural racism may affect reactions and actions of officers and the systems they work within in ways that create inequities,” she wrote.

There have been countless instances of police officers wounding or killing folks with disabilities because they didn’t comply. A white paper produced by the Ruderman Family Foundation states that “disabled individuals make up a third to half of all people killed by law enforcement officers. Disabled individuals make up the majority of those killed in use-of-force cases that attract widespread attention.”

Earlier this year, police fatally shot Magdiel Sanchez after he allegedly failed to comply with verbal commands. Sanchez was deaf, and neighbors reported yelling at the police that the man could not hear them, according to NPR.

In a statement, the ACLU (American Civil Liberties Union) said, “Magdiel Sanchez was shot at his own home, without having committed any crime, and in front of neighbors who knew he was deaf trying to communicate to the police that what they were about to do was wrong.”

People with disabilities can experience this at young ages, too. On Nov. 30, an elementary school substitute teacher called the police on a six-year-old Muslim boy with Down Syndrome, alleging that the non-verbal student was a terrorist. And unfortunately, attitudes like this are pervasive and have societal consequences.

McCauley asserts that higher arrest rates of disabled people is a public health concern. "For many with disabilities, quality health care is imperative for positive functioning within the community through increasing access to medication and support services," she wrote. Additionally, high-quality health care could limit interactions with the police, as some call 911 when mental health crises arise, which isn't always necessary.

This new study is important and eye-opening because disability is rarely taken into account in these analyses even though disability is one the most diverse marginalized identities. Living with a disability is not a criminal offense, and law enforcement needs training that allows them to de-escalate situations in a caring, compassionate way.

More like this
Plan C Vs. Plan B: What's The Difference?
By Lexi Inks
6 Abortion Advocates To Follow On TikTok
By Sara Youngblood Gregory
Jujubee’s Humble Reminder
By Sam Ramsden
Megan Barton-Hanson On Bi-Visibility & The Need For LGBTQ+ Love Island
By Sam Ramsden
Get Even More From Bustle — Sign Up For The Newsletter