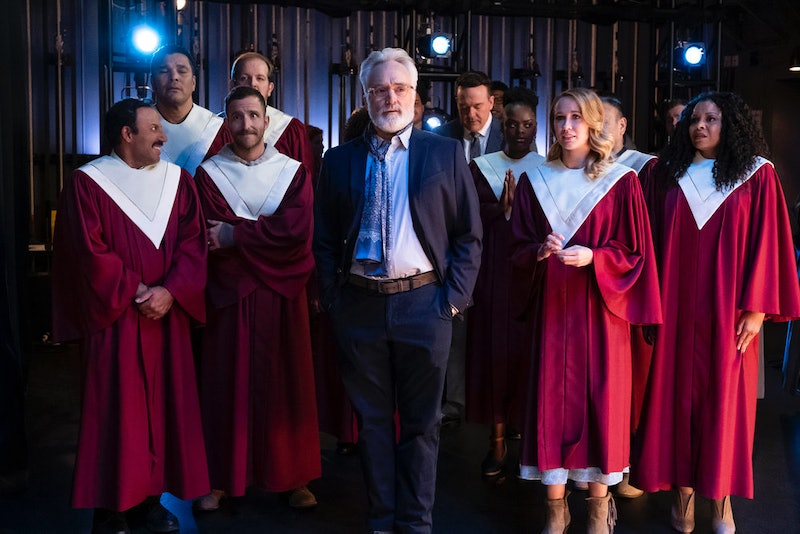 A TV show about a bitter, retired music professor who drinks away the loss of his wife and stumbles into a directorial job over a rural church choir is believable enough to be real, right? Lesley Wake Webster's Perfect Harmony isn't based on a true story, scene-by-scene, per-say, but, according to her comments at the Aug. 8 TCA Press Tour, it is inspired by true events and people from her personal life.

“I grew up singing in church choirs, going to church. My grandfather, who Bradley [Whitford]’s character was modeled on, was a choir director by trade… at the end of his life, he was living in rural Kentucky, my grandmother had passed away, and he got to a very dark place,” Webster shared at press tour, according to Deadline.

“The thing that brought him back to life and gave him meaning was directing this little choir," she said. "He was standing in a circle with people singing who had dramatically different beliefs and had been raised differently but together they made something really beautiful. That’s really what we want to bring to this. Yes, it’s set in a church but it’s really about people who are each other’s family and find each other. They do that through music and through friendship.”

Based off of synopses published prior to its premiere, that personal anecdote of Webster's is very similar to the underlying plot of her script. Whitford's character Arthur ends up leading a tiny church choir into its first year of choral competition, and together, they rally their strengths (and weaknesses) and become a force to be reckoned with. In an interview with TVInsider, Webster called the group "the Bad News Bears of church choirs."

Despite that tag from Webster, the show is upheld by a star-studded cast, some with past roles in projects like the equally musical Glee and Pitch Perfect, so really, it's set up for melodic success. Anna Camp plays single mom Ginny, who leads opposite of Whitford's character. She portrayed Pitch Perfect's Aubrey, the leader of the Barden Bellas in all three of its installments. And although she acknowledges Perfect Harmony's musical roots, Camp told E! News that she thinks the show goes much deeper.

"There are moments in this musical world, yes there's singing, yes it's super funny and there are lots of jokes, but there are some really grounded tended moments as well," she said. "And I think that all of the jobs that I've had, including Pitch Perfect, have all kind of led me to this moment."

Adam Anders, former executive producer of Glee, is also bringing his experience from McKinley High to the show, but he ultimately agreed with Camp's sentiment. “Naturally, this is more grounded. The best singers are in churches. The music is incredible in churches,” he said at the press tour with Webster. “Glee was more fantastical and we broke all the rules in a really cool way so for me it’s really fun to do the opposite.”