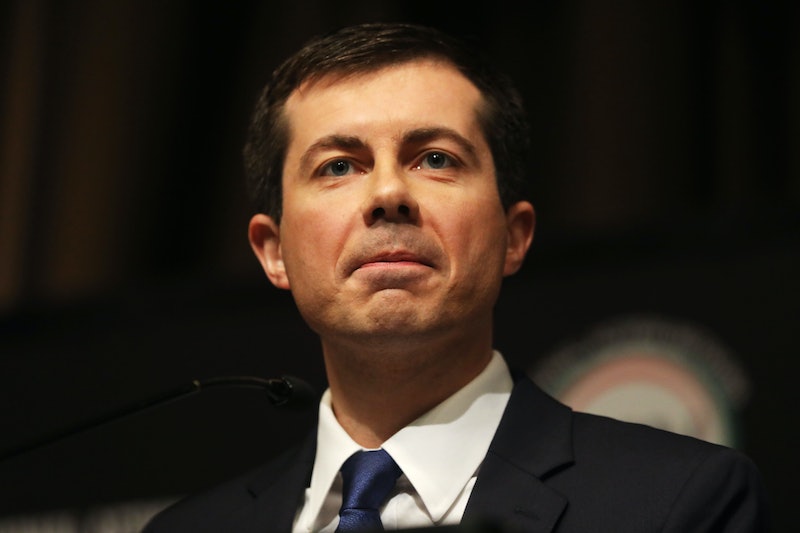 Mayor of South Bend, Indiana, and 2020 presidential contender Pete Buttigieg has called out Mike Pence in an emotional speech about his sexuality and marriage. The Democratic politician got personal, noting that his marriage to husband Chasten Glezman had "moved him closer to God," while speaking Sunday at The LGBTQ Victory Fund's annual National Champagne Brunch in Washington, D.C.

"It has made me more compassionate, more understanding, more self-aware, more decent," Buttigieg said of his marriage. "My marriage to Chasten has made me a better man. And yes, Mr. Vice President, it has moved me closer to God."

Speaking Sunday, the 2020 presidential hopeful opened up about not only his marriage, but his journey to self acceptance. "When I was young, I would have done anything to not be gay," he told the crowd. "If you had offered me a pill to make me straight, I would have swallowed it before you had time to get me a sip of water. It's a hard thing to think about now."

Buttigieg went on to say that it was difficult to think now of how much he'd once hated his sexuality for a few reasons, including the knowledge that many young people struggling with sexuality or gender identity do harm themselves. "But the real reason that it's so hard to think about is that if I had had the chance to do that I never would have found my way to Chasten," he said. "That the best thing in my life, my marriage, might never have happened at all."

Pence has previously advocated for amending the Constitution to define marriage as solely being between a man and a woman. In fact, Congressional records reveal that in 2006 he appeared before the House to argue that the issue of "protecting" the institution of marriage was not an issue of discrimination because being gay was a choice. What's more, he argued that marriage needed to be protected because it was God's idea and that allowing same-sex marriages would bring about "societal collapse."

Before that, Pence advocated for providing federal funding for conversion therapy. According to BuzzFeed News, the official website for Pence's 2000 congressional campaign suggested redirecting federal funding to HIV/AIDS research to "those institutions which provide assistance to those seeking to change their sexual behavior" under a section titled "strengthening the American family."

In Washington on Sunday, Buttigieg said that he agreed with those who spoke of marriage equality as a moral issue — although likely not how they'd like. "It's a moral issue because being married to Chasten has made me a better human being," he said. The 2020 hopeful then went on to rebuke Pence's argument that being gay was a choice.

"Speaking only for myself, I can tell you that if me being gay was a choice, it was a choice that was made far, far above my pay grade," Buttigieg said. "And that's the thing I wish the Mike Pences of the world would understand ... If you've got a problem with who I am, your problem is not with me. Your quarrel, sir, is with my creator."

According to The New York Times, Buttigieg and Glezman were married in June at the Episcopal Cathedral of St. James in South Bend. The pair first met in September 2015 after connecting on a dating app.