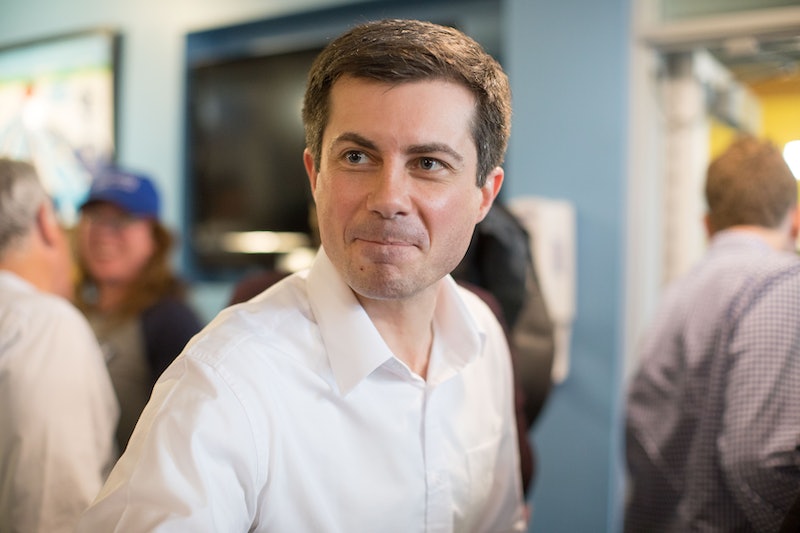 Mayor of South Bend, Indiana, and Democratic presidential candidate Pete Buttigieg faced protestors when he spoke at Dallas County Democratic Party's Johnson Jordan Dinner on Friday night in Dallas. The protestors shouted anti-gay messages referencing Buttigieg's marriage to his husband, Chasten, according to The Hill. But Buttigieg carried on through the interruptions, and when he did address them, he had a subtle but powerful rebuke.

Buttigieg was interrupted at least four times, according to CNN reporter DJ Judd, who wrote on Twitter that one protestor yelled, "Marriage is between a man and a woman!" Another yelled "Repent!" Judd wrote that after the fourth interruption, Buttigieg had a simple response for the protestor, saying that he packed his bags "for Afghanistan, to defend that man's freedom of speech... ." Buttigieg served as a lieutenant in the U.S. Navy and is a veteran of the war in Afghanistan, Military.com reported.

One of the protestors also yelled "What about the babies?," which was likely a reference to Buttigieg's pro-choice stance.

Buttigieg is the only openly gay 2020 presidential candidate, and he's faced a lot of harassment on the campaign trail so far. In mid April, while campaigning in Iowa, a protestor yelled “Remember Sodom and Gomorrah," according to Vice News, referencing biblical cities from a story that condemns sodomy.

Even then, the mayor had a measured response, saying at the time, "The good news is the condition of my soul is in the hands of God, but the Iowa caucuses are up to you," to which the crowd cheered, according to Vice.

Buttigieg is outspoken about his sexuality and has previously called out anti-LGBTQ elected officials for their views. During a speech at the LGBTQ Victory Fund National Champagne Brunch in early April, Buttigieg talked about how being gay is not a personal choice and specifically mentioned Vice President Mike Pence, who has made anti-LGBTQ statements. "That’s the thing that I wish the Mike Pences of the world would understand,” Buttigieg said, according to Vox. “That if you have a problem with who I am, your problem is not with me. Your quarrel, sir, is with my creator.” He later said that his marriage brought him "closer to God."

During an appearance on CNN's New Day on April 16, Buttigieg again called out Pence. “The vice president is entitled to his religious beliefs," Buttigieg said, according to The Hill. "My problem is when those religious beliefs are used as an excuse to harm other people."

Buttigieg said that "was a huge issue for us in Indiana when he advanced a discriminatory bill in 2015 under the guise of religious freedom, that said it was lawful to discriminate, provided you invoked religion as your excuse" — a reference to the Religious Freedom Restoration Act, which Pence signed into law and which triggered protests and boycotts.

Former Texas Congressman and 2020 presidential hopeful Beto O'Rourke also tweeted in defense of Buttigieg after his Friday evening speech. He wrote, "Texans don’t stand for this kind of homophobia and hatred. Mayor Pete, we are grateful you came to Texas and hope to see you and Chasten back again soon."

Given Buttigieg's response to the hecklers and his commitment to speaking openly about his sexuality, it doesn't look like he'll be backing down anytime soon.