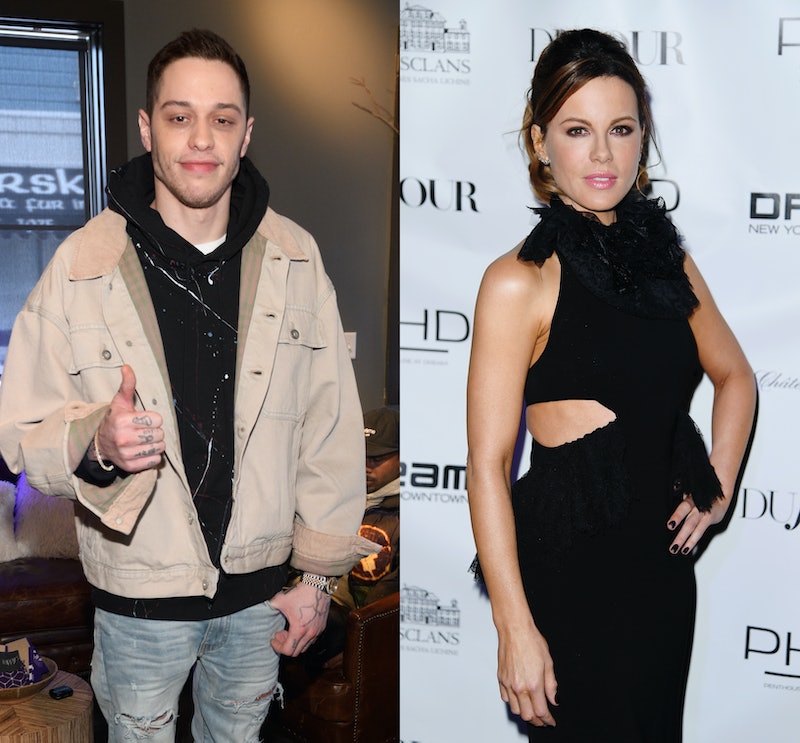 Ever since they were spotted getting cozy on a couch at Netflix's Golden Globes after-party, per E! News, fans have had their eyes peeled for more intimate Pete Davidson and Kate Beckinsale appearances. There have been a few since then. Most recently, the two were seen stepping out of a Saturday Night Live taping after-party, hand-in-hand, on the night of March 2 in New York City.

According to E! News, they were leaving Dos Caminos Mexican restaurant where Davidson signed a few autographs before reportedly joining Beckinsale in a black Cadillac Escalade. Davidson wore a bright, multi-colored puffer jacket, while Beckinsale's ensemble was all black.

This marks the third public sighting of the two including the Golden Globes event in January. According to E! News, they were also seen holding hands in February outside Largo at the Coronet, a Los Angeles Comedy venue where Davidson had just performed.

When people speculated that the two were a couple, a source told E! News that they were keeping things "casual," especially because they do the majority of their work on opposite coasts. Davidson did say that he was "dating again," per E! News, in December after he and Ariana Grande broke off their engagement, so it's possible that things with Beckinsale could become more serious. The same source who defined their relationship as casual also said, "Kate thinks [Davidson is] the sweetest and nicest guy."

Neither of them have publicly commented on the status of their relationship yet. But it's no secret that Beckinsale enjoys the comedic type. In November, she was spotted making out with comedian Jack Whitehall and she also dated Matt Rife.

Beckinsale recently celebrated being on the cover of DuJour magazine, during which she was asked to describe the perfect man for her. "Funny. I like funny," she responded, according to People. That shouldn't come as a surprise, considering her dating repertoire, and also considering her own unique sense of humor. Not often cast in comedic roles, the actress often uses social media to show her funny side.

On Feb. 9, she posted a photo on Instagram with a painting of the late singer Freddie Mercury. And like many of her captions, its description was sarcastic and witty. "Trying to look like someone who was not wildly over excited about this picture or startled while planning a sneaky lick of Freddie’s eyeball," she wrote. Her quick wit doesn't end with her captions, either. She's good at clapping back at commenters, too. “Is that a painting of Pete Davidson?” someone wrote. She responded with, “GREAT EYE."

So it seems like she and Davidson are the perfect match, right? One would think so, but according to a Feb. 4 report from People, a source said she's not looking for anything serious. "Kate's not looking to get serious with someone," the source said. "She wants to have fun with guys and date around."

Whether or not they decide to make things official, the possibility of romance between these two well-loved, funny celebs is super endearing, and for now, that's reason enough to appreciate their adorable outings.