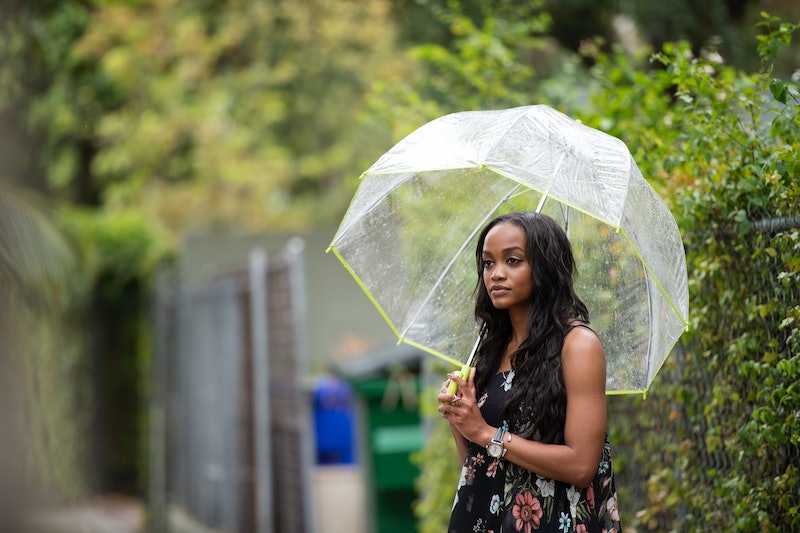 It's hard to be the runner up on The Bachelor or The Bachelorette — you've invested so much into believing you can have a successful relationship with a beautiful person you barely get to spend time with, only to get dumped into front of a national television audience of millions of people. But it was especially heartbreaking in the case of Peter Kraus, who clearly cared for Rachel but couldn't agree with her on whether or not he should propose. During the live segment of this season finale, Peter Kraus confronted Rachel after The Bachelorette about how their relationship ended, and what they said to one another was completely devastating.

Both Rachel and Peter admitted that watching the episode, in which Rachel left in tears after she and Peter argued over whether he should be ready to propose, was challenging. "I knew this was gonna be a hard experience," Peter admitted. "It’s been a long time. To go from the way that we parted to complete silence is hard. To see that, it brought me all back into it. I’m shaking like a leaf right now. I’m terrified. This is hard."

There was a long pause, but eventually Rachel reiterated why she was so frustrated with Peter: He promised he would leave if he wasn't ready to propose, she pointed out, but instead he was "still there" and planning this future with her "verbally" without taking the step that she wanted him to take — namely, an engagement proposal.

"I just don’t think this process, this journey, this show was for you," she suggested. "You need more time. You need to see things through. You’re searching for something else."

For his part, Peter apologized for suggesting that Rachel would be living a life of "mediocrity" without him, and explained why he uttered the phrase, "What's wrong with me?" as Rachel left that night. "I was incredibly emotional at the time and I watched you walk out the door and I knew you were a person I could spend the rest of my life with," he said, saying he let her go because he couldn't get to the point of commitment that she wanted.

"Why couldn’t I get to that point when I needed to? I still struggle with it now. I still wonder what could have happened differently," he added, even pointing out that he walked past her false eyelashes (which she cried off) on the floor for two days because no one had come to clean them off and he couldn't bear to.

"I still care about you, deeply, to this day," he also told her. "And watching that … I was just crying backstage and I come out here and I feel attacked, the way that you responded to that. I didn’t want to end it in the way that it did. I didn’t want to hurt you or waste your time." When pressed, he couldn't explain why he felt "attacked," just that he still had feelings for her and felt "nervous" and "frustrated."

Finally, as the mood got more and more intense between Rachel and Peter, it was time to say goodbye — for real this time, since they hadn't actually said farewell to each other when they broke up. "I have you to thank for the feelings I have," Peter said. "I wish you nothing but the best. I want nothing but happiness for you, that’s all."

To which Rachel responded, almost glibly, "I'm living my best life." Maybe she was trying to convince herself? As happy as she seems with Bryan, it seems like there was still a lot of unresolved tension between her and Peter — and he's definitely go down in history as the one who got away in this season of The Bachelorette.

More like this
10 Photos Of The Wildest Limo Arrivals From 'The Bachelor' Premiere
By Brad Witter
Zach Swears He Didn’t Look Up Contestants Before The Bachelor Began Filming
By Brad Witter
Bachelor Zach’s “Dream Job” Has Nothing To Do With His Work In The Tech Industry
By Brad Witter
'RHOP' Stars Robyn & Juan Reportedly Got Remarried & Filmed The Ceremony
By Brad Witter
Get Even More From Bustle — Sign Up For The Newsletter
From hair trends to relationship advice, our daily newsletter has everything you need to sound like a person who’s on TikTok, even if you aren’t.