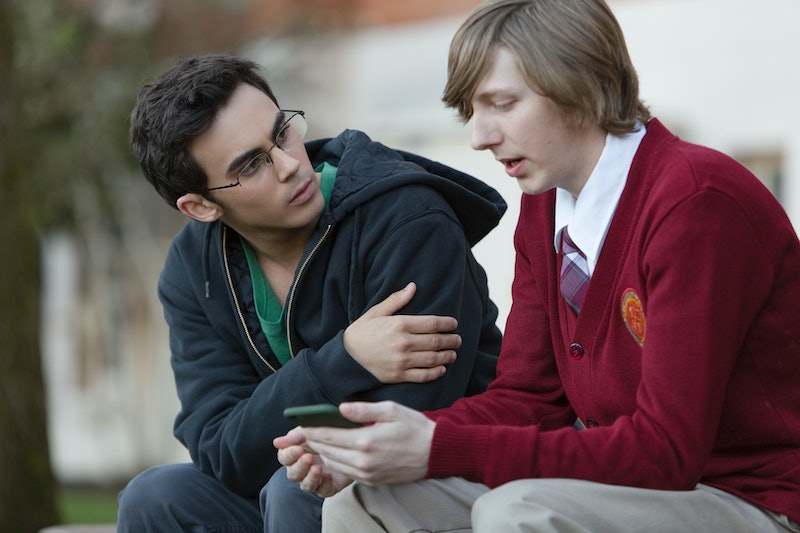 The thesis behind Peter's documentary in American Vandal Season 1 was essentially not to pre-judge others. It was wrong of the Hanover High administration to assume Dylan Maxwell committed a crime based on his reputation, and the person who actually drew the d*cks ended up being someone whose reputation would not at all suggest they were capable of such a crime. As a budding documentarian, Peter learned a lot about his own prejudices and biases in the process of solving that first crime. In Season 2, the stakes are higher for the students to top their first documentary, and as investigative filmmakers, they've learned to be less judgmental as they hunt for the truth.

"Peter was very much a lot more cautious with what avenues he went down and the theories and things that he followed up on," Alvarez tells Bustle, "because last season he exposed Sara Pearson's hookup list — and to be honest, it didn't really add too much to [the story]. It was for a reason, because he did prove that Alex Trimboli lied. But I think he was a lot more careful this time around with poking into people's private lives. I think he understands the power that he has with sharing people's stories."

He's not out to expose secrets that aren't relevant to the crimes committed — unlike, interestingly enough, Season 2's antagonist the Turd Burglar, whose main goal is to dig up anything and everything students at St. Bernadine's are hiding about themselves. Instead, Peter is growing up, and is careful to remind himself that his subjects are real people with emotions at stake. Invading the privacy of Sara Pearson and several of his other classmates at Hanover High in the name of finding out the truth is not too different from what the Turd Burglar threatened to do to Marcus, Jenna, Drew, and Mr. Gisualdi. And ultimately, Peter is an optimist who wants to help solve problems, not contribute to them.

"Peter says we're not the worst generation," Alvarez says, explaining how comforting it was to read Peter's finale monologue about the effect of social media on Generation Z for the first time. "I can't tell you how many times I've heard that from so many people." American Vandal does not damn this generation for being more digitally connected than previous generations, but does stress the impact of having people in your life that know and accept you no matter how you present yourself online — something that audience members and Peter learned from Dylan Maxwell in Season 1 and the Turd Burglar's blackmail victims.

"The fact that I was able to be the vessel to deliver that message to this generation was probably one of the most gratifying and humbling experiences in my career," says Alvarez.

So how do you top that? If American Vandal returns for Season 3, Peter and Sam will have so many new skills to apply to their next investigation. "Luckily enough I get to leave that up to the creators," Alvarez says of what a possible Season 3 would entail. "I would like to maybe do college. That would be fun. Solving a crime, maybe even in a fraternity, that would be really interesting — or maybe even solving a crime that goes on in some [juvenile] detention center or something like that."

Regardless of where the inevitable next crime takes Peter and Sam, there's no doubt we'll continue to learn things about ourselves right along with them.