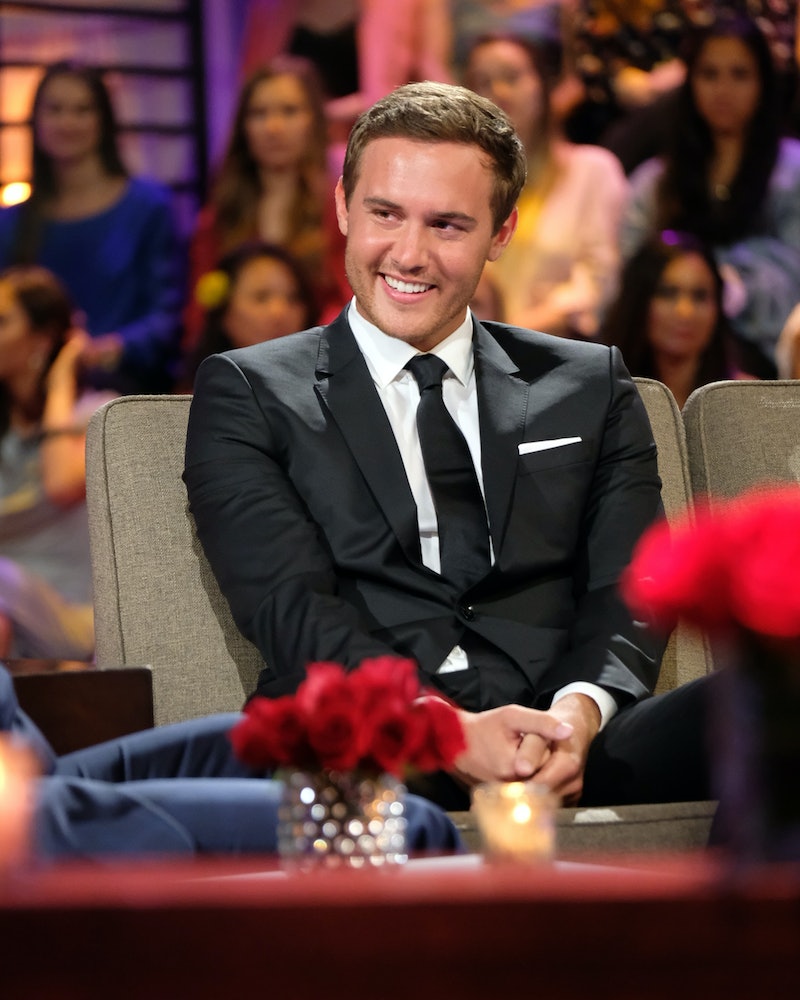 It can be really heartbreaking to run into an ex, but occasionally it can also help to provide a sense of closure, allowing both of you to move on with no hard feelings, which is precisely what appeared to happen between Hannah B. and Peter during this week's episode of The Bachelorette. Though he was sad to be eliminated, their reunion felt almost therapeutic, in a way, and Peter's message to Hannah after The Bachelorette proves how grateful he still is for the experience and that, even now, he doesn't have any regrets.

The first half of Monday night's episode centered around Hannah's decision to let Peter go. Afterward, the two met up alongside Chris Harrison in front of a live studio audience to talk about what happened and how they're both feeling months after the fact. Peter was clearly still hurting from the rejection, but he remained a complete gentleman throughout their entire conversation as he tried to piece together where exactly it all went wrong. (And yes, there were absolutely references to the windmill along the way.)

By the end of it all, Peter seemed relieved to finally get some answers and the two of them parted ways on solid terms. But just in case you had any lingering doubt about how Peter feels about Hannah and his time on the show, the handsome pilot posted a message on Instagram Tuesday morning with a heartfelt thank you for the opportunity this journey has given him.

"Gratitude. The feeling that has consumed me all season and especially now at the end of this journey," Peter wrote, before shifting his focus directly to Hannah, adding: "Thank you Hannah for the opportunity to pursue your heart. You will always have a little bit of mine after the time we were able to spend together."

Peter didn't leave anybody out, as his message continued with shout outs to the other men in the Bachelor mansion and the show itself. "Thank you to my brothers from the house. I know we all learned a lot about ourselves during this experience and I’m so happy I was able to make these memories with you guys," he wrote. "Thank you to @bacheloretteabc for giving this hopeless romantic a once in a lifetime experience I will never forget."

He went on to thank his family and friends, before thanking the only people who really matter, and that's Bachelor Nation:

"And thank you Bachelor Nation. I have felt your love and support since night one and I couldn’t be more thankful. Everyone on this planet deserves that ‘indescribable, words won’t do it justice, make your heart skip a beat’ type of love. Never stop until you find it"

If that isn't a plug for Peter to become the next Bachelor, then what the heck is? He even admitted to People during a recent interview that he'd be very interested in jumping at the opportunity should it come along. "I wouldn’t say no to trying it again because I know the experience works," he explained. "And I’m hopeful that my person is right around the corner.”

Regardless, it's nice to see that his heart is still open and that he can look back on his time with Hannah and now that he gave it his all, for better or for worse.