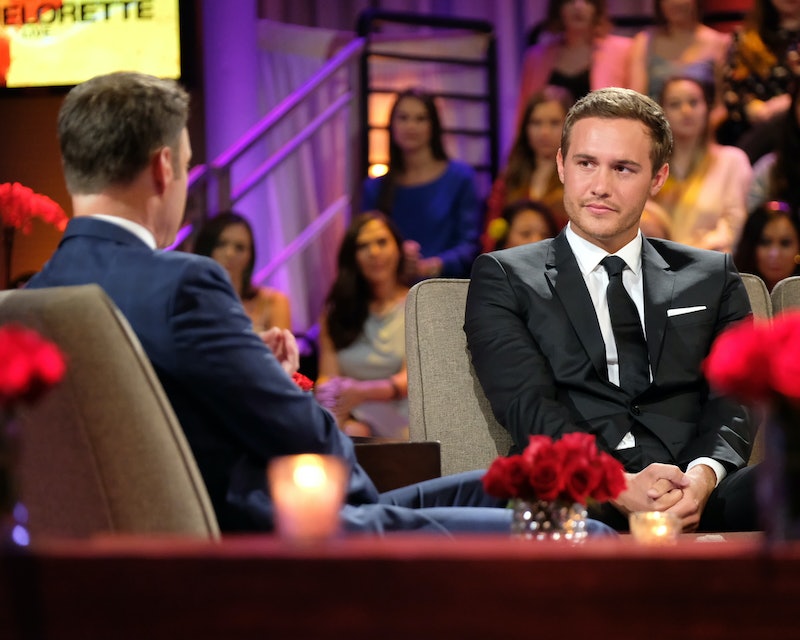 Some Bachelor and Bachelorette fans are hungry for any and all spoilers they can get their hands on. Who are the finalists? When does so-and-so get sent home? Who will lead the franchise next? But each season, the most important detail is figuring out who nabs the final rose. And unfortunately, it's back to the drawing board, because Peter's Bachelorette exit on Monday night disproved a major theory about how to predict the Bachelor/ette winner.

After finally sending Luke P. packing (and putting a lot of effort into getting him to leave for good), Hannah narrowed her final three down to Peter, Tyler, and Jed. She opened the rose ceremony by explaining how hard this decision was for her, and ultimately, Peter was the one who was sent packing. He was understandably heartbroken, and fans were plenty sad about watching him leave, too. But his departure means that the Twitter theory of the eventual Bachelor or Bachelorette winner always being to the left of the Bachelor or Bachelorette in the group photo has been disproved, because Peter is the one on Hannah's left side, and he... did not win the show.

It's nice to think that there's some sort of intense planning that goes into the photos of The Bachelorette and The Bachelor, but this isn't a Taylor Swift album drop — not everything is that complicated or planned out ahead of time. They probably just make all the women and men stand somewhat in height order to look up and take a photo high school choir-style.

Of course, there may be some behind-the-scenes maneuvering. "We've been told by people who work on the show that the first and last spots [during limo entrances] are considered to be for candidates of great potential. People who really meet what the Bachelorette thinks she wants," Claire Fallon, co-host of HuffPost's popular Bachelor recap podcast Here To Make Friends, previously told Bustle. There also seems to be some truth to the whole look-out-for-the-ones-who-get-romantic-music thing, and obviously, a guy with the job title "roller boy" is not going to end up engaged to the lead.

But at the end of the day, there's really no magic answer. The past three Bachelorettes have chosen the men they gave their first impression roses to, but now that Luke P. is gone, that's clearly not the case with Hannah. Then again, she's been breaking convention all season (let's not even start on the iconic windmill date), so maybe she's the exception to the rule.

Whatever the case, consider this standing-to-the-left theory put to rest for now. Unfortunately for Peter stans, it was all just a coincidence. But that doesn't mean we've seen the last of him! The beloved pilot's name has already been thrown into the ring of contenders to be the next Bachelor, and mere moments after Hannah sent him home, previous Bachelor Colton Underwood posted his not-so-subtle endorsement to Instagram. That has to count for something, right? Hopefully we'll find out soon enough, and then we can start speculating about who will win his season.