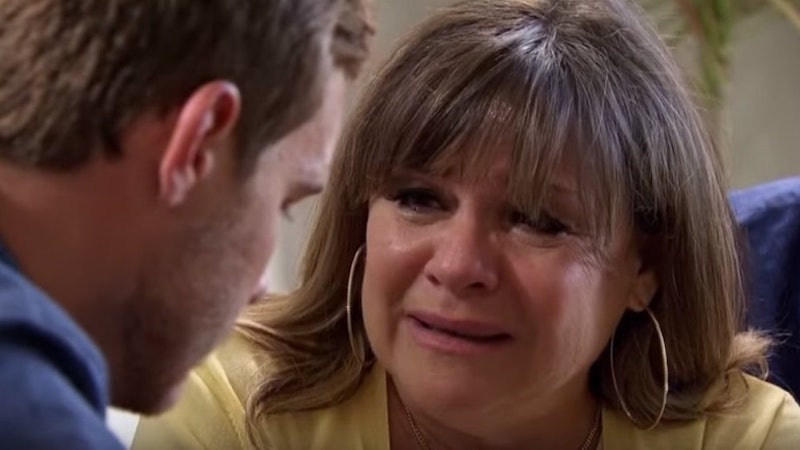 Peter Weber has faced a fair amount of criticism throughout the course of his Bachelor journey, but after part one of the finale aired on Monday, March 9, he isn't the only member of the Weber family to come under fire on social media. Peter's mom Barb is facing backlash from The Bachelor fans after pleading with her son to choose Hannah Ann over Madison. Many felt it wasn't her place to meddle in her son's dating life and try to guilt him into picking the woman she personally liked best. And with all the negative feedback, Barb has chosen to respond to the remarks with a few choice words that leave little room for interpretation.

Shortly after fans flooded the comments section of her latest Instagram post, one follower came to Barb's defense, insisting that the haters back off and praising her for voicing her truth. “Can people please leave her alone! Barb, I think you did the right thing,” the fan wrote. Barb replied to the remark shortly thereafter with her own thoughts on the matter, writing, “Thanks but I ignore all negatives!!” So it seems the Weber matriarch is simply taking the whole thing in stride and refusing to let the added criticism get to her.

Unfortunately, the harassment Peter's mom is currently facing is not an uncommon occurrence in the franchise. As Rachel Lindsay pointed out during the Women Tell All, online bullying has become commonplace for fans and only seems to be getting worse with time. And it extends to friends and family, too.

That's not to say that Barb's actions haven't been questionable. She made snap judgments about Madison and implied that her feelings regarding the Fantasy Suites and her values weren't as valid as her son's. Rather than respect Madison for standing up for her convictions, she seemed to almost resent her for it. It was definitely puzzling to see a figure, who had become so beloved in the public eye, show such an extreme bias between the final two women. However, that doesn't mean she should be shamed for it on social media.

To her credit, Barb's response was probably the best move she could've made right now. She didn't go on the defensive and attack her online haters, nor did she outright defend her actions. Perhaps when this is all over she'll be able to better explain her line of thinking when she's ready and on her own terms. Then maybe all of us can hopefully get some closure on the matter.