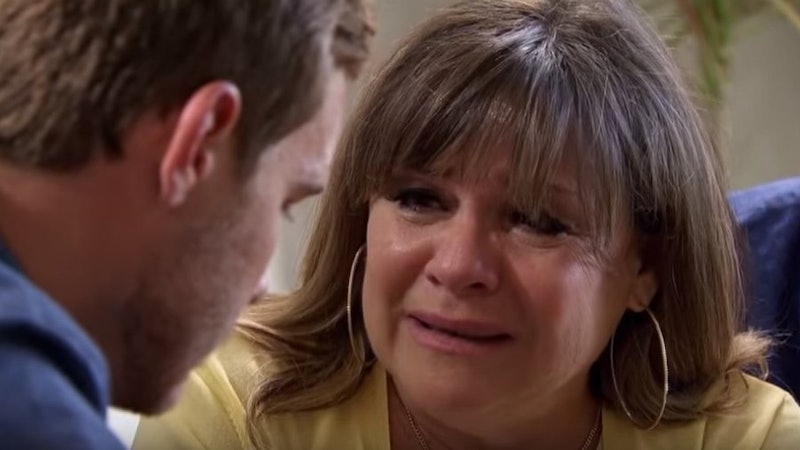 For weeks, Bachelor fans have seen Peter's mother, Barbara, tearfully telling him not to let one of his finalists go — and during the two-night finale, the moment finally aired. Except unlike what everyone was expecting, Peter's mom wasn't crying about Madison. She was crying about Hannah Ann.

The model won over Peter's family — and especially his mom — almost instantly after meeting them by being so open about her feelings. "She's just so loving and caring. I can feel the love she has for my son and that just means so much for me," Barbara told the cameras after speaking one-on-one with Hannah Ann about her relationship with Peter. By the time that Barbara was telling Hannah Ann that she feels "like I've known you all my life," it was clear that Peter's family had picked a favorite.

Unfortunately, the final decision wasn't so easy for Peter, who was still pretty hung up on Madison. So, before he went off to the finale dates, Barbara made an emotional plea to try and convince Peter to choose Hannah Ann. "You have the perfect girl right in front of you," she told him, about the "angel on earth" that she considers Hannah Ann to be. "Hannah Ann loves you with all of her heart. Don't let her go. Don't let her go. Bring her home to us, and we will welcome her home with all the love in the world."

Of course, Bachelor Nation wasn't just freaking out about seeing the long-anticipated moment finally play out — they were reeling over the fact that Barbara was, after all this time, sobbing over Hannah Ann. Peter's family met Madison during the very first one-on-one date and seemed to like her a lot, so viewers were convinced that's who Barbara was talking about (especially since everyone also suspected that Madison would leave the show, and that this would be Barb telling Peter to go after her).

Peter, meanwhile, was noticeably less enthused about his mom's reaction than Twitter. In fact, the pilot spent most of his visit with his family defending his relationship with Madison, as his father and brother were also very much on Team Hannah Ann. "You guys don't know the Madi that I know," Peter told his family over and over as they attempted — with varying success — to point out that he and Madison had very different values and lifestyles.

We'll have to wait until Part 2 of the finale to find out whether Peter proposes to Hannah Ann or attempts to make things work with Madison, but at least one of the most pressing questions on his Bachelor season has finally been answered (you know, other than who he actually ends up with).