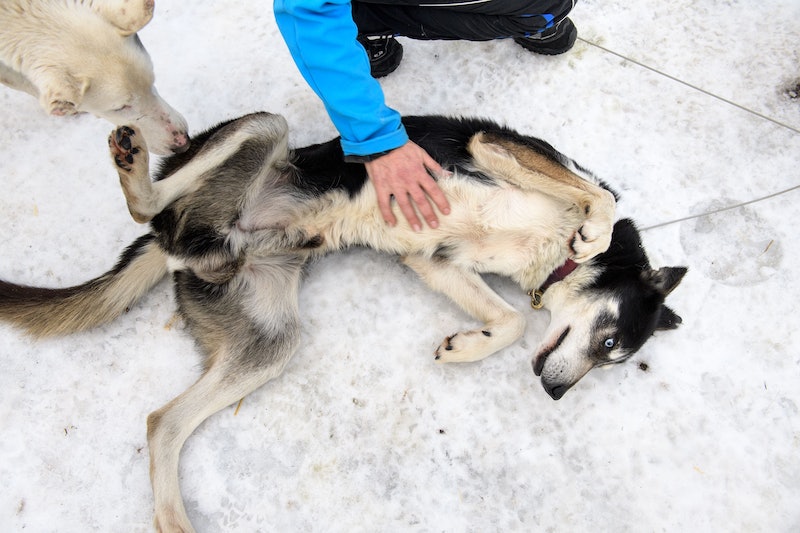 If you're a massive fan of petting every cat, dog and vaguely pet-able animal that crosses your path, you're not alone. Humans are very tactile creatures, and animals with soft fur that allow themselves to be handled and played with are popular domestic pets. On the face of it, this is actually a pretty peculiar instinct. But it turns out that petting a dog impacts your brain in a pretty amazing way, which can explain why so many people find it a calming experience.

There are a lot of different elements to human-animal relations that answer this question. For one, the human nervous system is extremely finely tuned, and our brains actually divide the things we experience on our skin into "pleasant", "neutral" and "unpleasant touching". Our brains interpret these stimuli in different ways, and experiencing a nice sensation on our skin is tied to activity in a part of the brain called the anterior cingulate cortex. That area is responsible for a lot of our emotional processing, so when we feel something pleasant on our skin, we respond with emotionally positive feelings. This goes for all types of enjoyable sensations, including touching fabrics and running our fingers through coffee beans — but playing with animals involve other responses that make them particularly positive for us.

It's been known for quite a long time that having an animal in your life has positive psychological effects, because their proximity and emotional connection to you are good for your mental health. And at least part of that benefit is based on giving them pets and cuddles. According to numerous studies, petting animals, even if they're not your own, lowers human stress levels and heart rate and releases positive hormonal signals. Studies of college students given therapy animals to pet during exams show that they all reported lower stress levels after the experience. The British Psychological Society also reports that several experiments have shown that petting an animal reduces blood pressure and heart rate, which are tied to feelings of stress. If you're feeling anxious, it may be a good idea to find an agreeable animal and spend some time giving it some tactile treatment.

Why do we find petting cute puppers so good? According to Petable, research has demonstrated that petting animals brings on a small surge of dopamine and serotonin, which induces positive feelings. And, interestingly, the results aren't confined to fur and fluff. A 2010 study found that people experienced stress reduction and calming feelings when they stroked both furry and hard-shelled animals, including turtles. And the effect remains the same whether you're a self-described animal lover or not. It's something that's apparently innate to our approach to other living animals that we don't view as threats.

And the reason we respond so strongly to petting animals, it seems, is also grounded in the importance of touch to humans. We respond a lot to touch in social situations, use it to bond with others, and can experience reductions in pain and anxiety when we're touched by those we trust and love. Touching isn't just a sensation; it's a means of communication and bonding. We bond strongly with our pets in part because we have physical relationships with them that allow for the exchange of touch. They sniff, lick, rub against and sit on us, we pet them, and the bond between the two species is strengthened.

If you're experiencing anxiety or stress, it's a good idea to see if you can spend time with a friendly animal or reptile which will enjoy being fussed and patted. It'll stimulate all the right areas of your brain, and give you a lasting positive mood boost.

More like this
The Best Sunscreens For Pale Skin
By Adeline Duff
Is It Actually Bad To Cut Your Cuticles?
By Stephanie Chon and Paris Giles
How Skin Care Experts Are Stepping Up To Support Transgender Patients
By Audrey Noble
The 6 Best Shaving Creams For Sunburns, According To Experts
By Lauren Moison
Get Even More From Bustle — Sign Up For The Newsletter