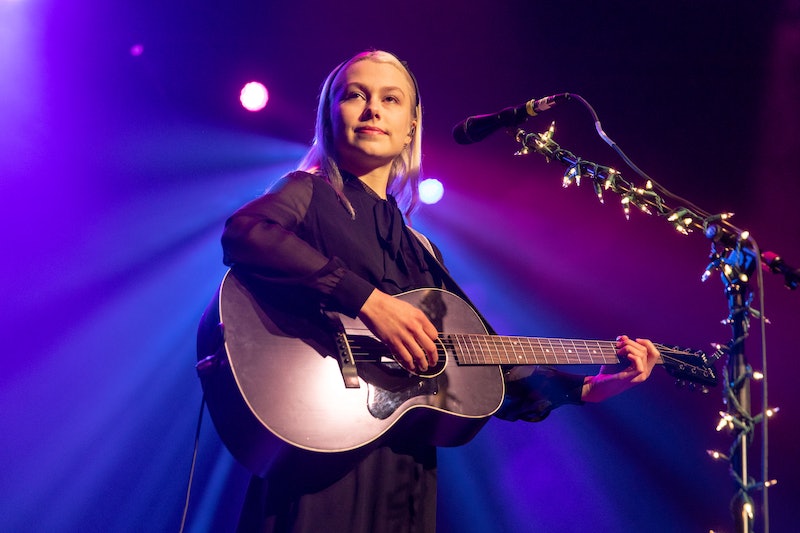 On Feb. 13, The New York Times published interviews with multiple women, including Mandy Moore and Phoebe Bridgers, who accused music producer and artist Ryan Adams of psychological abuse — particularly related to the manipulation of their musical careers. Some of the women accused Adams of sexual misconduct as well. Adams' lawyer, Andrew B. Brettler, denied all claims to the Times. Since the piece was published, there has been an outpouring of support for these women on social media. And on Feb. 16, Bridgers tweeted her thanks for the support she's received since coming forward with her allegations, and shared her thoughts on the entire situation.

"It's been a weird week and I wanted to say a couple of things," Bridgers tweeted three days after the Times report ran. "Thank you from my whole f*cking heart to my friends, my bands, my mom. They all supported and validated me. They told me that what had happened was f*cked up and wrong, and that I was right to feel weird about it. I couldn't have done this without them."

After thanking her support system, she claimed that Adams' alleged behavior was enabled by his peers, and she encouraged her followers to be active bystanders if they ever witness harmful and toxic behaviors from their friends.

"Ryan had a network too," she wrote. "Friends, bands, people he worked with. None of them held him accountable. They told him, by what they said or what they didn't, that what he was doing was okay. They validated him. He couldn't have done this without them. Guys, if your friend is acting f*cked up, call them out. If they're actually your friend, they'll listen. That's the way this all gets better."

Bridgers began to work with Adams in 2014, according to the Times report. Adams invited her to the studio to share a few of her songs. He reportedly then asked her to record music with him and open for him on tour. Bridgers alleged that their relationship quickly turned romantic, and then "obsessive and emotionally abusive."

According to the Times, Bridgers claimed that Adams began sending her text messages that insisted she prove her location when they weren't together. She also claimed that he would ask her to leave social situations to participate in phone sex, and he allegedly would threaten suicide if she didn't reply immediately. Bridgers told the Times she eventually broke things off between them, at which point she alleges that her plans to release music with him and to go on tour together were ended by the producer. Adams contested Bridgers' description of their relationship via a statement from his lawyer to the Times. He characterized their time together as "a brief, consensual fling."

Following the release of the Times report, Adams posted a series of tweets apologizing for anyone he may have "unintentionally" hurt. He wrote, "I am not a perfect man and I have made many mistakes. To anyone I have ever hurt, however unintentionally, I apologize deeply and unreservedly." He then claimed that some of the details in the Times report were "exaggerated" and "false."

Bridgers' post follows one from Mandy Moore, who was married to Adams for six years. Moore posted on Instagram to share her support of the women involved. "Speaking your truth can be painful and triggering but it’s always worth it," she wrote. "My heart is with all women who have suffered any sort of trauma or abuse. You are seen and heard. #sisterhoodforever." Adams' lawyer told the Times that Moore's description of her relationship with her ex-husband is "completely inconsistent with [Adams'] view of the relationship," and he also denied that Adams ever tried to stop Moore from progressing in her musical career.

For her part, Moore voiced her support of Bridgers by sharing the musician's tweet on her own page, and writing, "Facts. Thank you, @phoebe_bridgers." The actor added a "love you" represented by a heart emoji and "you" at the end of her retweet.