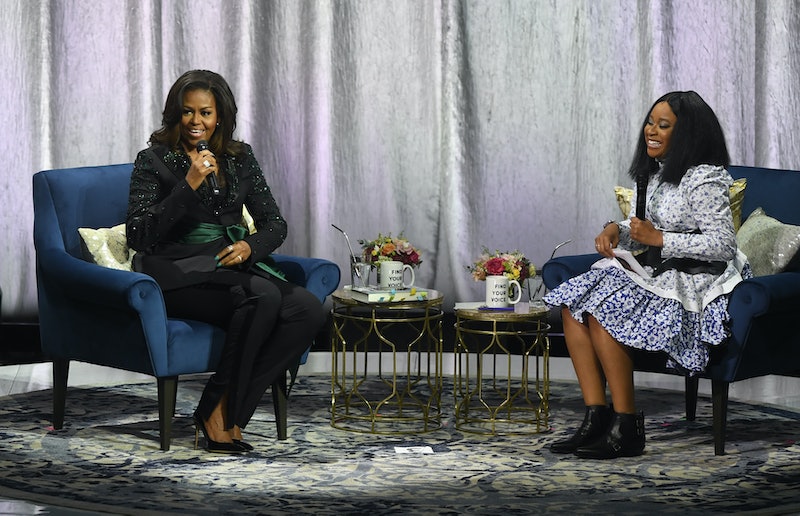 For a long time, comedian Phoebe Robinson had a near-impossible dream: to receive a holiday card from none other than the Obamas. The former 2 Dope Queens podcast host didn't necessarily have a plan for getting on that coveted list, but nevertheless the dream persisted. Then in 2018 Robinson's likelihood of a Christmas card became much, much greater — when Phoebe Robinson and Michelle Obama finally linked up.

Obama appeared on the final episode of 2 Dope Queens to discuss her memoir Becoming. Soon after, Robinson hit the road with Obama on her Becoming tour — which has now been immortalized on the Netflix documentary of the same name — to moderate a few of her events.

Robinson also appears in the documentary, where she's seen meeting with a group of young black women along with Obama during a stop on the tour. "It's cute that my wig is in that trailer shot for Netflix. You know it's like, can I put this on my IMDB page?" Robinson jokes of her cameo.

But it was after the tour that things got really exciting. "My boyfriend and I traveled for three weeks over the Christmas holiday. Then we came back and in the mail, there was a holiday card from the Obamas," Robinson tells Bustle. "I freaked out. I had him record a video of me reacting to it. I was looking busted, my weave was out."

It was a such an over-the-top, comical reaction, that even the former FLOTUS appreciated it. "I sent it to Michelle, and she started laughing. It's bizarre to be like, you know, 'I sent Michelle Obama a text and she laughed,'" Robinson continues. "But it's just really cool. As a society we're so lucky to have someone like her as a leader. She makes us want to bring out the best in ourselves. Honestly, I think that's probably will be her biggest impact."

More like this
Here’s Everything Coming To & Leaving Netflix In February
By Jake Viswanath
Pamela Anderson’s Dating & Marriage History Could Be Its Own TV Series
By Jake Viswanath
Ashton Kutcher Wants Danny Masterson “To Be Found Innocent” In Rape Retrial
By Jake Viswanath
'Wednesday' Star Emma Myers Thinks A Wenclair Storyline Is “Possible” In Season 2
By Alyssa Lapid
Get Even More From Bustle — Sign Up For The Newsletter
From hair trends to relationship advice, our daily newsletter has everything you need to sound like a person who’s on TikTok, even if you aren’t.