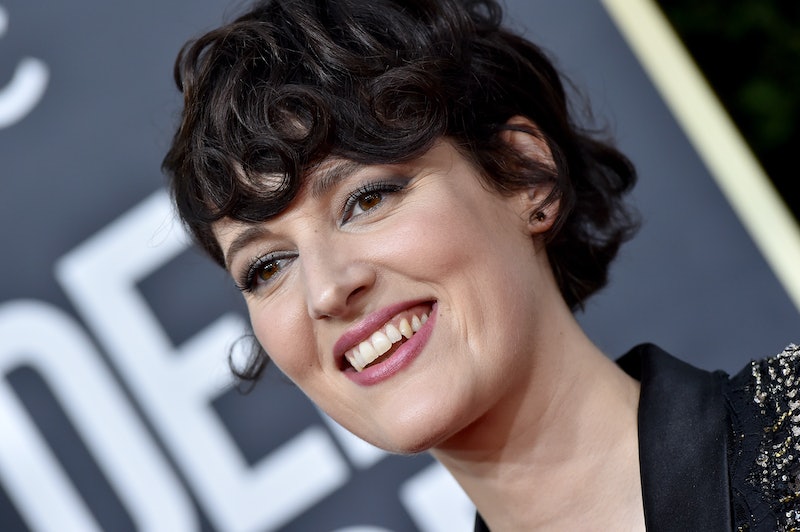 If you skipped the 2020 Golden Globes red carpet, you missed seeing some next level looks. From puffy sleeves to sheer dresses, trends emerged, and one of them was suiting. Phoebe Waller-Bridge's 2020 Golden Globes suit, however, may have taken the cake for one very specific reason.

The writer and star of Fleabag (as well as showrunner for Killing Eve) was nominated for Best Performance By An Actress In A TV Series — Musical Or Comedy. Fleabag itself garnered a Best Television Series nomination (as well as a nod for Hot Priest aka Andrew Scott). For the important event, the actor and writer chose a black and gold tweed suit with metallic details, a silk lapel, and cropped pants. The creation just happens to be from Australian-based designers Ralph & Russo, and that's partially what makes it so special.

In her backstage acceptance speech (she won for her performance in Fleabag as well as the show as a whole), Waller-Bridge announced that she would be auctioning off the suit to provide relief for Australia as the country is facing widespread brushfire. In her backstage interview, Waller-Bridge explained that she worked directly with Ralph & Russo to plan the auction and donation and called the couture suit "the most extraordinary thing I've ever worn."

Waller-Bridge wasn't the only star at the Golden Globes who had the Australian bushfires at the forefront of her mind. Actor Russell Crowe did not attend the Golden Globes despite his nomination and instead sent a message to the audience when he won Best Actor in a Limited Series TV or Movie. In a message delivered through presenter Jennifer Anniston, Crowe explained that he didn't attend as he's at home protecting his family and goes on to explain that the bushfires are based on climate change and made calls for a move toward renewable energy.

Other celebrities, including native Australians like Cate Blanchett also took time to recognize the climate crisis facing Australia. The Where'd You Go, Bernadette? actor honored the volunteer firefighters during her on stage moment and recognized the fellow Australian actors in the room. When accepting her Carol Burnett Award at the event, Ellen Degeneres also voiced a message of support for the country, and host Ricky Gervais finished the broadcast by calling on people to donate to firefighting efforts.

While there were fewer shows of activism, like Time's Up pins and ACLU ribbons, the stars at the Golden Globes still took a moment to call attention to a cause.