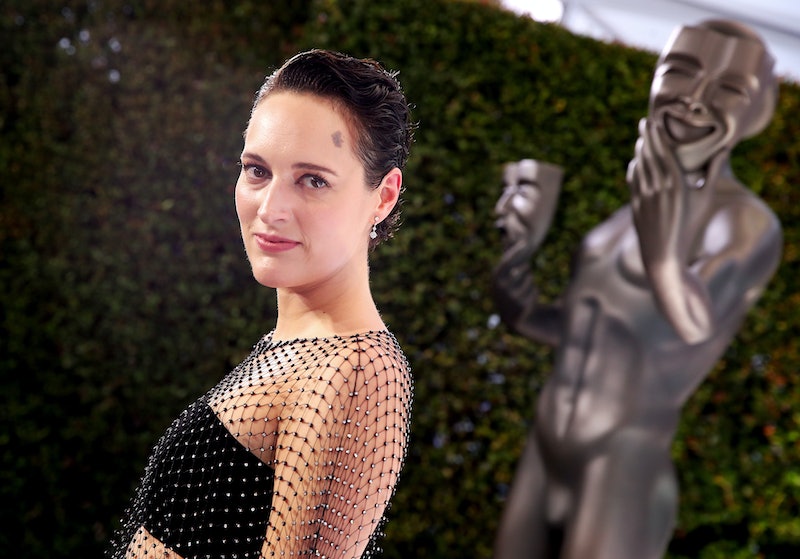 Spoilers ahead for Season 1, Episode 5 of Run. Each installment of HBO's new thriller, Run, raises the stakes (or perhaps lands on the stakes, in Fiona's case) from last week. The Sunday, May 10 episode is no exception: Ruby (Merritt Wever) and Billy (Domhnall Gleeson) jump off the train and accidentally kill Fiona during a chase through the wilderness. But none of that is as surprising as Phoebe Waller-Bridge's Run cameo, in which she plays a creepy yet surprisingly wise taxidermist named Laurel.

But while Waller-Bridge has certainly acted before — before Fleabag, she had notable roles on Broadchurch and Crashing, among others — it was still shocking to see her pop up in Run, matter-of-factly prodding a dead badger. The show's hapless protagonists encounter Laurel in the dead of night after fleeing their accidental murder scene. They need a ride to the nearest train station, and this mystery woman is their best bet.

Waller-Bridge's character is introduced, shovel in hand, about to transport the aforementioned animal into her car. Laurel gives off a chaotic, vaguely homicidal energy, so they understandably don't know what to make of her — especially since she inexplicably talks about dead animals for a solid minute.

"I've been here about six years, but I came here for the animals," she explains to Ruby and Billy once they're in the car with the dead badger on their laps. "Which...animals?" Ruby asks, looking out the darkened window at the empty landscape. "Mostly the dead ones," Laurel responds. "Dead beavers, dead prairie dogs — just anything dead, really. There's a lot of roadkill around here. No one touches it. It's such a waste."

The roadkill, she continues, "all but come back to life" after they're stuffed, causing a eureka moment. "Oh thank God," Billy exclaims, relieved they're riding with a taxidermist and not an axe murderer. Even more surprising than her unsavory profession, Laurel gives the two fugitives some great advice regarding Billy's mom, who they claim has cancer. "Tell him to keep talking about her," the taxidermist tells Ruby. "It's what helped me."

In many ways, Laurel feels like the polar opposite to Fleabag. American accent aside, the taxidermist seems much more well-adjusted than Waller-Bridge's most famous character (and she would have tastefully stuffed Boo's guinea pig, I'm sure). Perhaps the two women would have even gotten along — Laurel could have helped Fleabag mourn her own mother's death and make sense of what happened to Boo. It's like Laurel says: "People don't really know what to do when they see a dead thing. I've just always felt very comfortable with them."

More like this
Here’s What Happens To Bill & Frank In 'The Last Of Us' Video Game
By Brad Witter
'The Crown' Season 6 Has Suspended Filming "Out Of Respect" For The Queen's Death
By Bustle Staff
Here’s Everything Coming To & Leaving Netflix In February
By Jake Viswanath
At 28, Debra Jo Rupp Was Living A Much Different '70s Show
By Grace Wehniainen
Get Even More From Bustle — Sign Up For The Newsletter
From hair trends to relationship advice, our daily newsletter has everything you need to sound like a person who’s on TikTok, even if you aren’t.