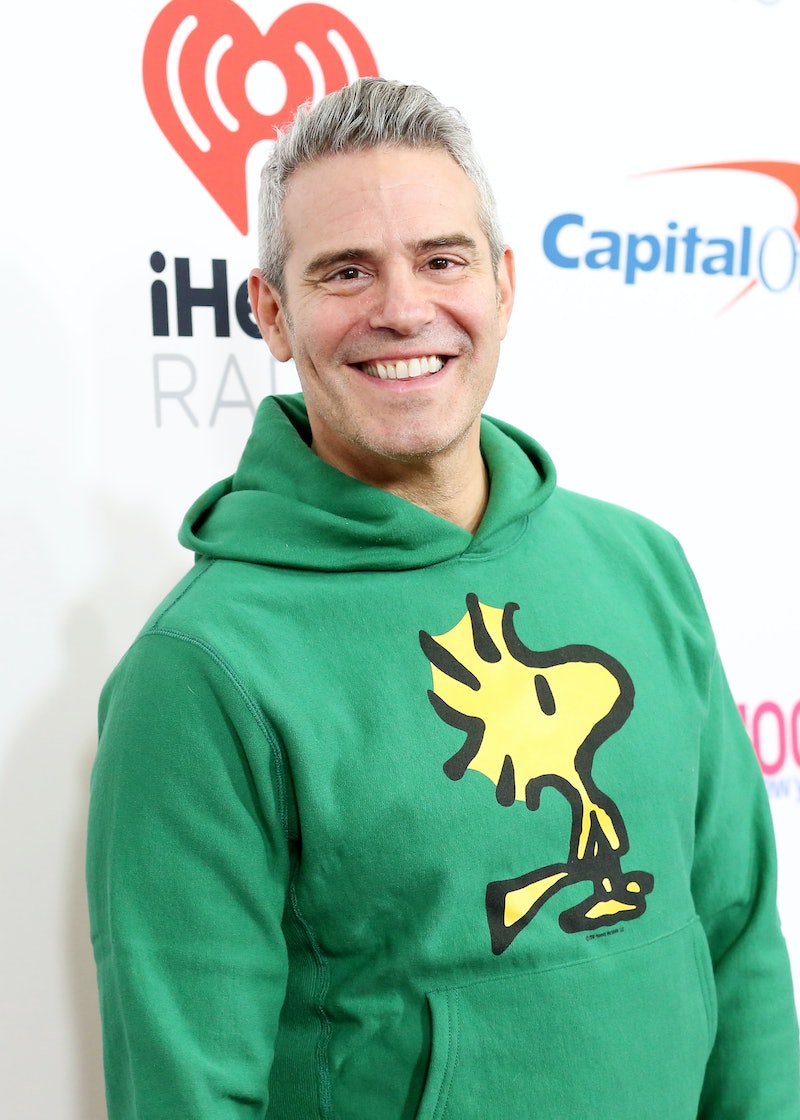 Andy Cohen is going to be a father, and he celebrated his baby-to-be with new and old friends alike. Case in point: Andy Cohen's baby shower doubled as a Real Housewives reunion, with many of the cast showing up to offer their support and celebrate with the Watch What Happens Live host. As reported by People, the party took place at The Palm Beverly Hills, and had an A Star Is Born theme. The decorations included long tables with white and blue flowers, as well as a floral arrangement in the shape of a giant blue star that became the perfect backdrop for guests to take photos. Several Real Housewives alumni helped organize the event, including Teresa Giudice, Kyle Richards, NeNe Leakes, Ramona Singer, and Vicki Gunvalson, as per People.

In December, Cohen revealed he's expecting his first child via surrogate on an episode of Watch What Happens Live. In an emotional close to his final show of 2018, the host shared his special personal news with fans. "Tonight, I want you to be the first to know that after many years of careful deliberation, a fair amount of prayers and the benefit of science — if all goes according to plan in about six weeks time I'm going to become a father," Cohen said. "Family means everything to me and having one of my own is something that I have wanted in my heart for my entire life."

On Saturday, Cohen shared several updates from the baby shower on Instagram. The talk show host also posted a slideshow of pictures from the celebration, writing:

"Thanks OG's Kyle, Vicki, Nene, Ramona & Teresa for hosting a party like no other. And Bruce Bozzi, the Palm Beverly Hills is now an iconic stop on any Housewives Tour. It’s the Room Where It Happened."

Cohen's close confidantes and party hosts weren't the only cast members who came out to show their love — nearly 50 Housewives stars from over seven franchises were in attendance, as reported by People. He posted a group photo with every Real Housewives cast member, and the guests all look so happy for the guest of honor. He wrote: "I’m speechless. Every Housewife, featuring John Mayer."

Guests at the event shared plenty of pictures as well. Giudice documented the beautiful venue on her Instagram Story, including pictures of the gold cake and extravagant table settings. The party featured plenty of singing and dancing as well — Singer shared a video of herself dancing on a bar with Lisa Rinna, Tamra Judge, and Richards. The caption reads: "The most amazing baby shower ever!"

Cohen also shared several moments from the dance-off that ensued at the celebration on his Instagram Story. The host posted a video of the reality stars dancing on the tables and appearing to have the best time ever doing so.

In another moment from his story, Cohen documented even more of the dancing at the party. It's clear he was having a blast, as he wrote: "I love baby showers!"

The star was clearly thrilled to have so many members of the Real Housewives community on board to support this next chapter in his life. According to People, Richards said the guest list was intentional. "We kept the list to mainly Housewives to simplify things," she told the publication. “Most men can barely handle one wife and Andy has a lot of wives to deal with!”

Guests couldn't get enough of the celebration either, and they posted photos of plenty of the stunning decorations on social media. They also shared the most adorable group shots. Sonja Morgan posted a selfie that she snapped with Cohen, John Mayer, and several Real Housewives cast members, and it's safe to say it's the ultimate treat for Bravo fans.

It's clear that Cohen's Real Housewives hosts knew the best way to commemorate his upcoming adventure as a father. The baby shower was not only beautifully decorated, it also seemed to be a fun time for all of the guests. From the table dancing to the gorgeous cake, the Real Housewives helped Cohen usher in his next chapter in style.