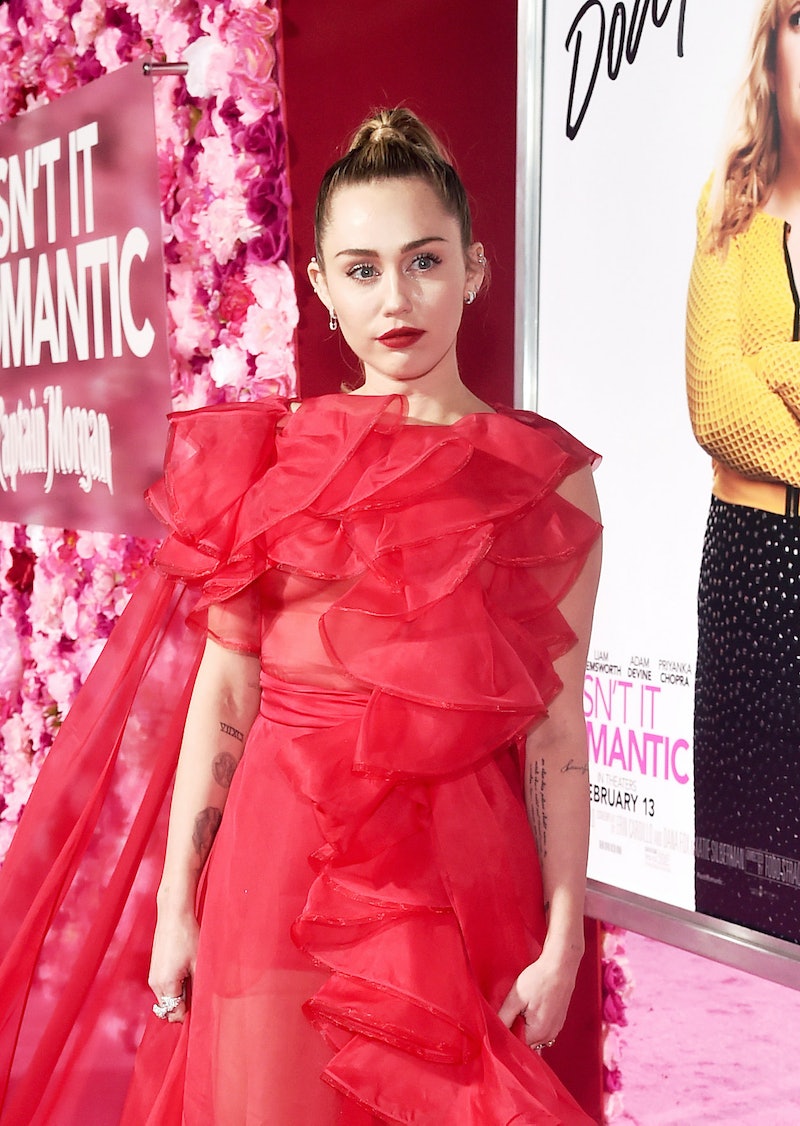 On Saturday, Aug. 10, People confirmed that Miley Cyrus and Liam Hemsworth have officially separated, and are deciding to focus on themselves as individuals for the time being. Now, they're each taking time to reflect and relax, and Miley's trip with Kaitlynn Carter and Brandi Cyrus is her way of doing that.

The speculation of the couple's potential split surfaced when Miley shared a photo on Instagram without her wedding band on her left ring finger. Her rep told People the following regarding her current relationship status: "Liam and Miley have agreed to separate at this time. Ever-evolving, changing as partners and individuals, they have decided this is what’s best while they both focus on themselves and careers. They still remain dedicated parents to all of their animals they share while lovingly taking this time apart. Please respect their process and privacy." (Bustle reached out to representatives for Cyrus and Hemsworth, but did not receive an immediate response.)

Now, Miley is in Italy with her sister Brandi and Carter, and they're sharing some stunning snaps of their adventures. On Saturday, Carter posted a selfie with Cyrus from a boat on Lake Como with the caption "rock the boat, don’t rock the boat baby." Her ex Brody Jenner, with whom she just recently separated, commented on the pic. "Hot girl summer," he wrote, accompanied by the flames emoji.

It wasn't shared on social media, but per People, Miley was spotted kissing Carter poolside during their trip as well. A source told the publication that Miley and Carter are "just having fun" together, and the singer reportedly shares mutual friends with The Hills star.

On the same day, Brandi shared a photo from the same lake before the trio changed into their swimsuits. "Girls trip," she captioned the photo. She included the emoji of the Italian flag.

It looks like they've spent a lot of time in and on the water. On her Instagram Story, Brandi shared a video of Miley doing a handstand from underwater. "Excellent form," she wrote, tagging her younger sister. She also shared a boomerang of her and Miley jumping off the dock into the lake wearing black bathing suits. "Wanna jump off the dock?" she wrote. "Yup!"

When they're not in the water, they're taking in some incredible views. Brandi posted a few videos from a helicopter tour of the area. "Heaven," she wrote.

Miley hasn't been very active on social media during the trip, presumably because she wants privacy at the moment. But she did share a skincare sesh selfie with her sister on her Instagram Story. Brandi smiled from under a sheet mask and the "Mother's Daughter" singer sported a white clay mask. "Much needed QT w BGI sis," she wrote, tagging Brandi.

Cyrus also took time out of her vacation fun to post about what she's feeling after her split with Hemsworth. On Sunday, she captioned a photo of herself standing on a mountain:

"Don’t fight evolution, because you will never win. Like the mountain I am standing on top of , which was once under water , connected with Africa , change is inevitable. The Dolomites were not created over night, it was over millions of years that this magnificent beauty was formed. My dad always told me “ Nature never hurries but it is always on time”.... it fills my heart with peace and hope KNOWING that is true. I was taught to respect the planet and its process and I am committed to doing the same with my own..."

It seems that Cyrus' girls' trip is the perfect way to kick off the next phase of her journey.