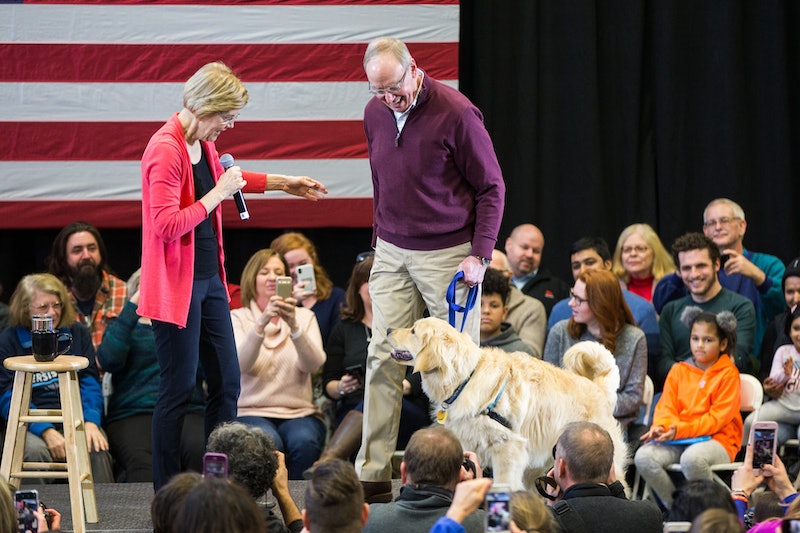 Campaign season is kicking into high gear and the pressure is on for the Democratic field's many candidates to make an impression. However, amidst the high stakes of the campaign, there are some friendly faces that are bringing lots of fun and levity to the presidential race. These photos of the 2020 Democratic candidates' pets reveal that their furry friends play an integral role in their lives — and sometimes even in their campaigns.

Many of the Democratic presidential hopefuls have pet dogs and cats that are featured on their social media profiles. Some of these pets, like Mayor Pete Buttigieg's dogs, Truman and Buddy, even have their own social media accounts. Others have played a prominent role in their "parents'" campaign activities.

For example, Senator Elizabeth Warren's dog, Bailey, attended his first-ever political event in New Hampshire in January 2019. Bailey proved quite the crowd pleaser at the event, with the senator joking that her pup might be more popular than her. "If anybody wants to stay around and take a picture, I’ll be here and we can do that,” Warren joked at the event, per People, “And Bailey will be out there with his own separate photo line. This is not a competition.”

Overall, play a big role in many of the 2020 candidates' personal and professional lives. The list below takes a closer look at who these "campaign pets" are and why they're the true stars here.