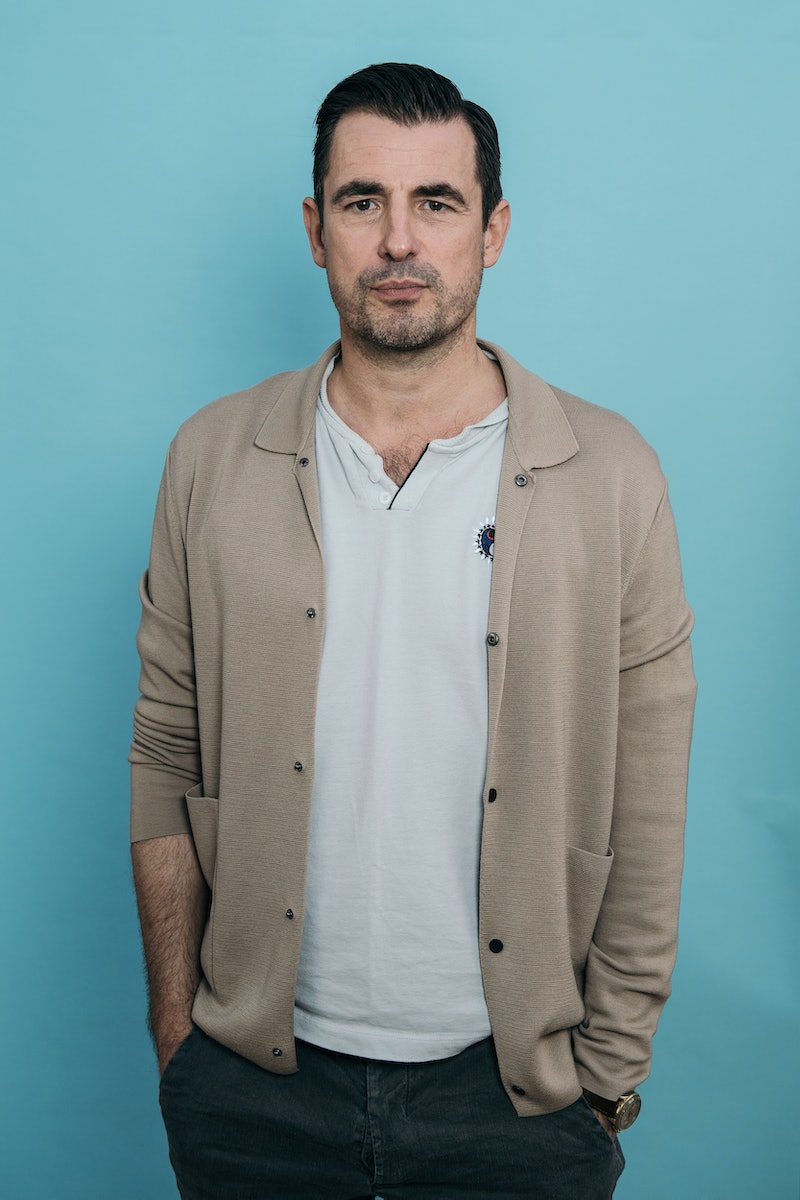 The iconic horror novel Dracula has been adapted many times over the years, and the classic tale is being reimagined once again in an upcoming TV series, brought to us by the BBC and Netflix. The series will be made up of three feature-length instalments, and filming of the project — which was penned by the creators of BBC's Sherlock — is currently underway. Now, the first photos of BBC's new Dracula have been released, and they're bound to get the public even more excited for the upcoming show. But what else is there to know about the forthcoming series? Here's all the information we have so far.

In the newly released photos, Claes Bang stuns as Dracula. In one, he has red eyes and what appears to be blood all over his face, while, in the other, he looks far more charming, leaning on the back of an ornate chair. Gah!

According to a statement sent to Bustle, BBC's Dracula is a modern reinvention of Bram Stoker’s classic story, and is a co-production between the BBC and Netflix. The new series was written by Sherlock's Mark Gatiss and Steven Moffat, and the show's three feature-length instalments will be directed by Westworld's Jonny Campbell, Killing Eve's Damon Thomas, and Film Stars Don't Die in Liverpool's Paul McGuigan.

According to the BBC, Dracula will be produced by Hartswood Films, and was commissioned for UK television by the Director of BBC Content, Charlotte Moore, and the Controller of BBC Drama, Piers Wenger. Filming of the new series kicked off earlier in 2019 at Orava Castle in Slovakia, before continuing on to England where production is currently taking place at the world-renowned Bray Studios.

"It's seriously delightful that our new Dracula is being shot at Bray Studios — the former home of Hammer Films! This wonderfully atmospheric and legendary studio gave birth to so many famous monsters and stars — most memorably Peter Cushing and Christopher Lee. As we watch Transylvania once again rise on the sound stages of Bray, it's amazing to be able to say that Count Dracula has finally come home."

As mentioned previously, the BBC and Netflix production is presented as an adaptation of Bram Stoker’s classic Gothic novel, which was first released way back in 1897. According to the Express, the new series will differ from the Sherlock creators previous work, which brought a 19th-century character into the modern world, because Dracula will stay true to its original Victorian setting. Confirmation of this was found in a short BBC synopsis of Dracula released earlier this year. It read: "In Transylvania in 1897, the blood-drinking Count is drawing his plans against Victorian London. And be warned: the dead travel fast."

As reported by the BBC, as well as Claes Bang, the cast of Dracula includes includes John Heffernan, Joanna Scanlan, Dolly Wells, Morfydd Clark, Lujza Richter, and many more.

There's currently no word of an exact release date, however, Dracula will be broadcast on BBC One in the UK, while international audiences will be able to stream the new series on Netflix. With the backdrop of a classic story and a stellar cast, Dracula is set to become one of the most anticipated new dramas of the year, and I can't wait to sink my teeth into it.