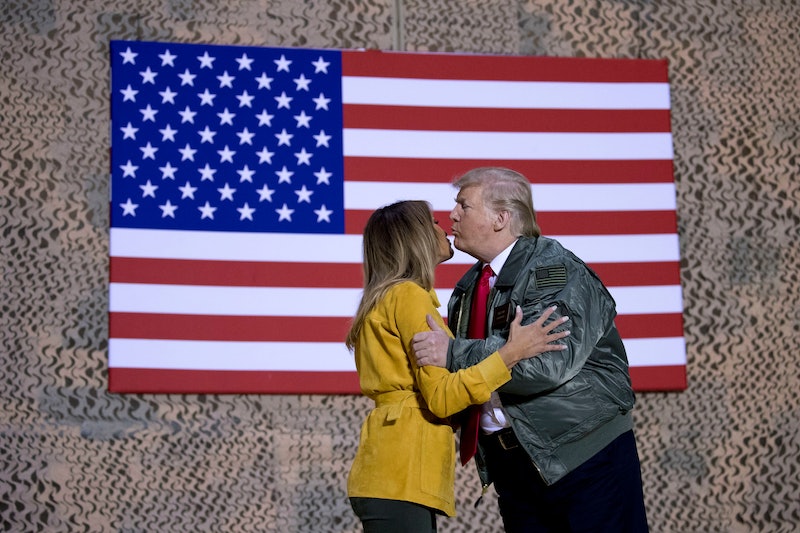 On Wednesday, the president and first lady made a surprise holiday visit to see troops stationed overseas. Photos of Donald and Melania Trump in Iraq captured the first family in a combat zone for the very first time.

Until Wednesday afternoon, Trump had faced criticism for apparently not visiting any troops in the lead-up to the holidays this year, a presidential tradition that has been in place since 2002. But that changed when Press Secretary Sarah Huckabee Sanders tweeted out a photo of the Trumps posing with soldiers on Dec. 26.

"President Trump and the First Lady traveled to Iraq late on Christmas night to visit with our troops and Senior Military leadership to thank them for their service, their success, and their sacrifice and to wish them a Merry Christmas," she captioned the photo.

Because of security reasons, reporters who joined the president on his trip were prohibited from reporting on the visit until several hours after he landed, Bloomberg reported. News about his visit broke mid-afternoon, ET.

Trump also spent part of Christmas Day calling and video conferencing with troops stationed around both the United States and the world, according to multiple reports. "I know it’s a great sacrifice for you to be away from your families, but I want you to know that every American family is eternally grateful to you, and we’re holding you close in our hearts," he told the troops during one call, according to the Huffington Post. "Thoughts and prayers. We’re all praying for you."

On Wednesday, the president also tweeted out a video montage of his visit, with clips featuring him greeting service members alongside Melania. "@FLOTUS Melania and I were honored to visit our incredible troops at Al Asad Air Base in Iraq," Trump captioned the video. "GOD BLESS THE U.S.A.!"

The president's visit lasted about three hours, CNN reported. During his time there, he and Melania shook hands and took photos with military members. Photos also showed the president giving a speech to an audience of men and women in uniform.

During his visit, Trump defended his recent decision to withdraw troops from Syria, according to multiple reports. "I made it clear from the beginning that our mission in Syria was to strip ISIS of its military strongholds," he told the troop members, according to the AP.

“Eight years ago, we went there for three months and we never left,” Trump said. "Now, we’re doing it right and we’re going to finish it off."

The president's surprise trip to Iraq comes just days after Defense Secretary Jim Mattis announced his resignation, which the president originally framed in a tweet as a "retirement." Trump and Mattis reportedly disagreed about how to handle the U.S. military presence in Syria. However, the words he shared with service members in Iraq suggested that the president was stalwart in his decision to remove troops from the country.

“The nations of the region must step up and take more responsibility for their future,” Trump told troops in Iraq during his holiday address, according to the AP. He added that there would be a "strong, deliberate and orderly withdrawal."