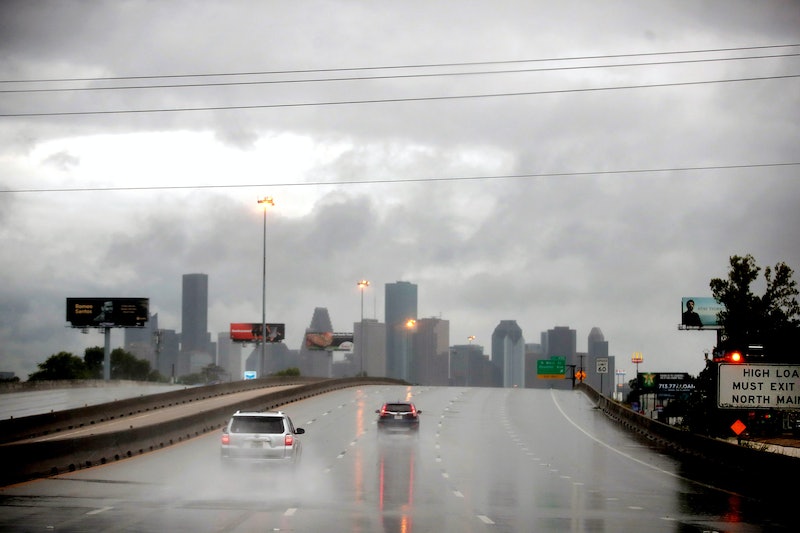 Over the weekend, Hurricane Harvey hit the Houston metro area and nearby parts of Texas hard. The Category 4 hurricane made landfall on Friday, becoming the first Category 4 storm to hit U.S. soil since 2004, according to CNN. Although the storm was downgraded to a tropical storm by Sunday morning, photos of Hurricane Harvey's flooding in Houston showed just how strong the storm really was.

Coastal Texas cities like Rockport and Galveston first took the brunt of Harvey's Category 4 force. When the storm made landfall, the National Hurricane Center reported that Harvey had winds of up to 130 miles per hour. As Harvey moved further inland, the storm dropped more than 20 inches of rain on the Houston metro area, with some parts of the city seeing 12 to 19 inches of rainfall in just six hours. On Sunday, The Weather Channel predicted that the rain would continue, as the Houston area could see a total of 40 inches of rainfall.

Needless to say, the flooding led to serious damage. William P. Hobby International Airport in Houston closed on Saturday night, and more than 1,000 people were rescued around the city overnight into Sunday, according to Fox News. At least three people had died from Harvey's impact as of Sunday. The rain was expected to continue, but the damage was already vividly apparent.

The mess made its way inside residents' homes.

The water rushed through streets and up to buildings as the rain continued to fall.

Videos of rushing water seemed a vivid warning for people to stay off the streets if possible.

So much water, indeed.

If you're wondering how all that water could accumulate, just look at this heavy rain battering Houston.

"Praying That We Are High Enough"

Many flooded residents rushed to upper levels in their home, including attics, to escape the high waters.

In some places, flood waters appeared to be the only thing in sight.

The popular waterway and recreation area in downtown Houston overflowed from the flood waters.

The full extent of the damage may not be visible until the flood subsides.

Even the local news stations reporting on the flood damage were not immune to the destruction.

As the harrowing photos of the floods circulated on Sunday, many Texans continued to brace for more rain. Those in Houston and beyond could help relief efforts by supporting the American Red Cross' Texas Gulf Coast region, which includes the greater Houston area. You can also support the Houston Humane Society, which remained open during the storm but with "skeletal crews."