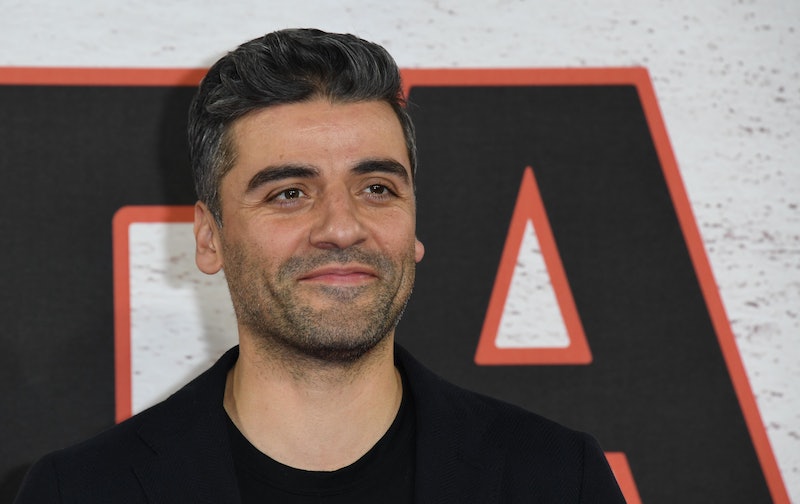 Sometimes, being a fan means navigating a tricky line between wanting to know everything about a star and trying to respect their privacy. Since the Star Wars actor welcomed his first child in April, no one can blame you if you're wondering where the photos of Oscar Isaac's son are, or if they even exist. Want the good news first? There was a tweet containing a video of Isaac's girlfriend Elvira Lind cradling their newborn baby earlier this year, where she explains why she couldn't be at the Tribeca Film Festival. The bad news? Well, there don't appear to be any other images of the child available. But if you're a fan, you'll surely respect Isaac's right to privacy and acknowledge this as a good and healthy thing.

The couple has been publicly— or as public as possible when you're with the notoriously private Isaac — dating since the 2016 Golden Globes, according to Us Weekly, when Lind was his date to the event. According to her own website, Lind is a "a Danish director from Copenhagen based in New York" who directed the documentary Bobbi Jene. Perhaps Lind's skills in visuals abetted them — the pair managed to conceal the pregnancy until the month of the birth, with JustJared reporting in April that Isaac's girlfriend showed her pregnancy bump "for the very first time" at the PS122 Gala.

Presumably Isaac is aware that photos of his son would only increase press focus on his first child, and as such, probably the lack of photos is out of protectiveness. This seems fair. After all, while every first born tends to be the apple of their father's eye, this baby seems to mean everything to the actor.

In a July 2017 New York Times interview, Isaac confessed that his son, Eugene, is named after his mother, Eugenia, who passed away this past February, and that the baby has his mother's lips and hands. In the same interview, he confided that while playing the titular role in a stage production of Hamlet, he thought about his son during the "to be or not to be" speech, which he argues is about finding a reason to live rather than dying. "You have a child,” he told the paper, “and you must — you must for their sake — you must say yes to life."

But while Isaac might be among the most eloquent stars when it comes to expressing the joy of having a baby, he isn’t the only Hollywood parent who seems staunchly anti-photos when it comes to his child. According to the BBC, when pictures of George Clooney’ newborn twins were taken by a French magazine Voici (who Clooney claimed scaled the fence surrounding his property and climbed a tree presumably to reach the windows of his home) without permission, the actor promised to prosecute.

Similarly, according to The Guardian, while speaking in favor of a bill to protect children from paparazzi, Jennifer Garner said in August 2013, "I chose a public life and understand that this means sacrifices in terms of privacy for our jobs." She continued, "In my case this means that I am sometimes photographed. However my three children are private citizens and more than that—at one, 4 and 7 years old—they're just little kids."

If Isaac ever needed tips on how to keep his child's life entirely private, he should probably go talk to Gilmore Girls actor Alexis Bledel. According to Elite Daily, nobody even knew that Bledel was pregnant until after she'd given birth. The same source reports that basic details, like the child's name and date of birth, have also never been revealed.

So, no, there are no photos of Eugene Isaac yet, but if you're a genuine fan of his dad, you'll be OK with that. Admiring Oscar Isaac means accepting the importance he places on privacy. Given the fact that Eugene is very much a child, the lack of photos is understandable.