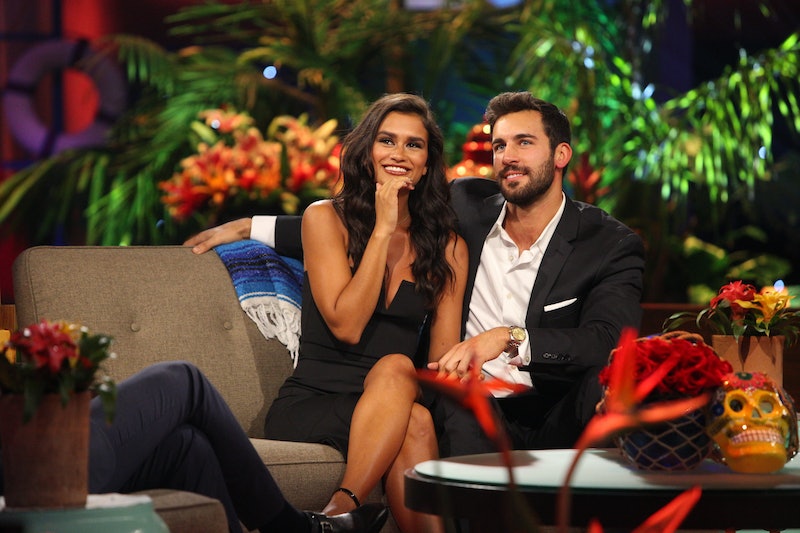 Taylor Nolan and Derek Peth came out of the most recent season of Bachelor in Paradise as the sole engaged couple in the bunch. The couple's cute love story had fans rooting for them from the start. (Well, at least after they got over their opinions of Taylor from her time on Nick Viall's Bachelor season.) And now, post-show, Taylor and Derek post the cutest photos on social media that prove they're destined to be together forever.

Taylor and Derek failed to find love on their seasons of The Bachelor and The Bachelorette. Taylor had that whole feud with Corinne Olympios going on during her season, which didn't allow her to focus on her love connection with Nick. Derek wasn't involved in much drama during The Bachelorette, but was left crying in Argentina by his season's lead, JoJo Fletcher. Luckily, the two were able to focus on the "right reasons" and find love with each other on Bachelor in Paradise.

Derek and Taylor's relationship was strong during the entirety of Paradise (that short-lived fight over a certain "f-you" phrase notwithstanding). In fact, they went so strong during Paradise that the two ended up engaged by the end. Derek got down on one knee during the post-show for the season and popped the question to Taylor with a Bachelor Nation classic Neil Lane ring. Hopefully, a Paradise wedding will be in the cards for these two in the future.

But, fans don't have to wait until a televised wedding to see more of the adorable pair. The couple have been posting some seriously sweet photos on social media and these pics prove that the two are made for each other.

Taylor and Derek know how to clean up well. The two got a little fancy in this pic and Derek couldn't help but gush over his fiancée. He captioned the photo with, "She's so bootyful ... #hadtoputaringonit".

These two are super cute even when taking a simple trip to Ikea.

This adorable photo has a more simple caption, but it's still so great. She captioned the cute snap, "I kinda like his face, a lot".

All About That Emotional Intelligence

Taylor and Derek aren't pictured here as a couple, but they may as well be. Derek is getting caught up on some reading here and reading all about "emotional intelligence," a phrase that Taylor used — and was made fun of for using — during her time on The Bachelor.

Taylor and Derek are captured here moments after their lovely engagement on the after-show for the latest season of Paradise. They just look so in love surrounded by those classic Bachelor rose petals. How could anyone say they're not made for each other?

They may disagree on their selfie aesthetic sometimes, but they still have an A+ selfie game.

These two have their selfie game on point. Derek posted the photo, seemingly taken during a New York trip, and captioned it, "I may be in Seattle ... but 'I'm in a New York State of mind'".

In this photo, Taylor pointed out that she and Derek are long distance, but clearly they're excited to see each other any chance they get.

In A Very Instagram-able Location

He's not afraid of a cheesy caption, is he?

Taylor and Derek were the definition of #RelationshipGoals while they were on Bachelor in Paradise. And these photos prove that they weren't only goals on the show, but are made for each other outside of paradise, too.