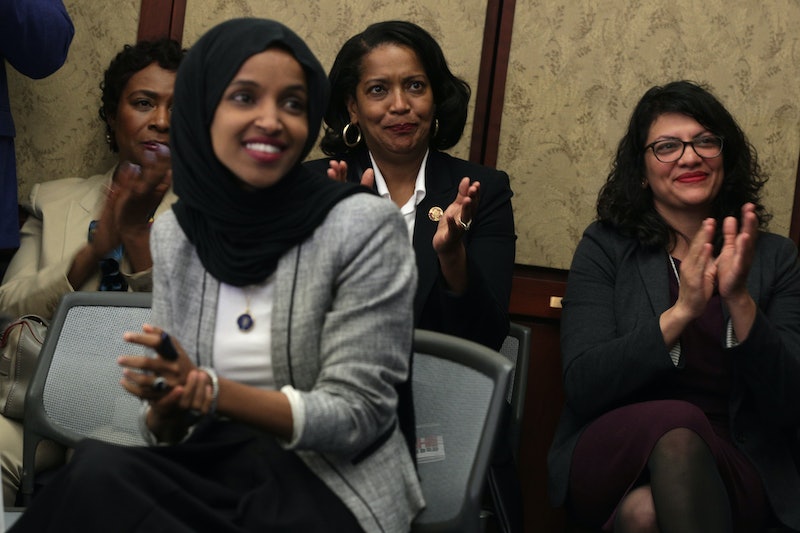 Reps. Ilhan Omar of Minnesota, Rashida Tlaib of Michigan and André Carson of Indiana marked the end of the Ramadan fast on Monday by wishing colleagues "Ramadan mubarak" over a buffet line feast. They joined some 100 people in the Capitol Visitor Center to take part in the congressional iftar — which photos show doubled as a bit of a "who's who" of the Democrats' freshman class. This was the first such celebration ever hosted on Capitol Hill, The New York Times reported.

"It is wonderful to serve together in one of the greatest, most powerful bodies in the world, to get this opportunity to convene with you all to celebrate and share a tradition," Omar told The Times.

In addition to Omar, Tlaib, and Carson, there were a number of prominent members and leaders of both the House and the Senate at the dinner. Among them were Rep. Alexandria Ocasio-Cortez of New York and Sen. Dick Durbin of Illinois, according to NPR.

Muslim Advocates, a nonprofit legal and advocacy organization, sponsored the event, which at times took on a political tenor. "We will stop this white supremacist, white nationalist rhetoric that’s so hateful, so divisive, so deadly, as we’ve seen in Charlottesville," Durbin said, according to The Washington Post. Carson told The Times that no Republicans attended, even though a spokesperson for Muslim Advocates told The Post they were invited.