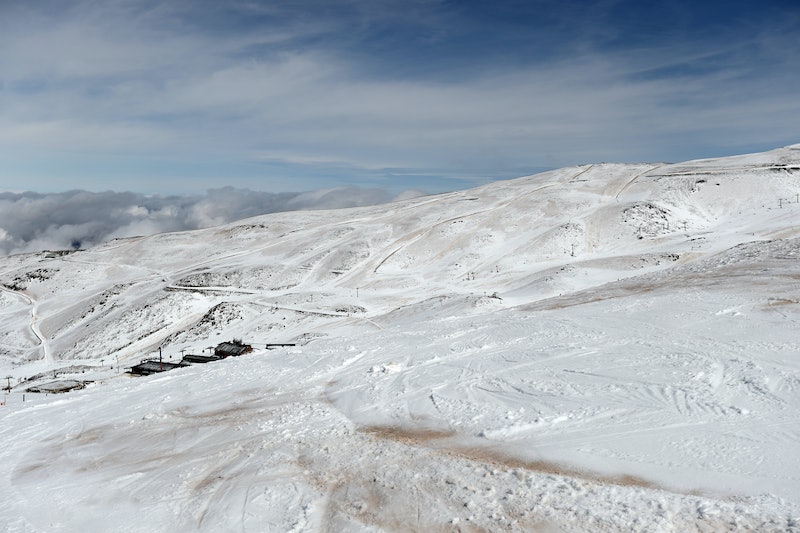 Despite all the movies seemingly warning us about robots taking over the world, we're still building them. Whether for good or evil, one thing is for sure, it is at least for our entertainment. And the photos of the first robot ski tournament held near the 2018 Winter Olympics are absolutely gold. Proving that maybe we should lighten up when it comes to robotic innovation.

Rumba vacuums drift across our floors, automatically collecting dust bunnies and crumbs we've dropped on the floor, and they do so without needing manual direction. While I don't mind chores, robots can take that job from me. Not that I want robots to take jobs away from Olympic skiers or anything, but maybe there's no harm to have a robotic Olympics and human Olympics occurring at the same time.

As the Olympics continued in PyeongChang, South Korea, a robotic ski tournament was happening on a mountain not far from the one top human athletes were competing on. Business Insider reports, "eight robotics teams from universities, institutions, and one private company all contested the Ski Robot Challenge at the Welli Hilli ski resort, one hour west of PyeongChang, on Monday." And wait until you see headless robots wrapped in down jackets swerve down snowy slopes. It is, I promise you, a sight.

The challenge was not officially the "Robot Olympics" but instead "Edge of Robot: Ski Robot Challenge" where teams competed for a $10,000 prize. But the photographic evidence from the challenge proves to be priceless. Robots the size of children zig-zagged down slopes in ski suits, displaying their ability to avoid obstacles and ~hopefully~ not wipe out. Thankfully the Olympic sized pressure wasn't on the performance and so the world can watch in awe instead of with butterflies in their stomachs.

According to The Verge, in order for the robots to qualify they, "had to fit the requirements of a humanoid robot, such as being able to stand on two legs and having joints resembling elbows and knees. They also had to be a minimum of 50 centimeters tall." This has to be amongst the best thing you've seen all day. It should at least inspire an audible, "aw!"

You might notice that the robots lack a head. But it's nothing as freaky as Sleepy Hollow's Headless Horseman. Because, science and technology, obviously. As reported by Business Insider, "robots were fitted with camera sensors. This effectively enabled them to 'see' the blue and red flagpoles that they had to ski around." All the robots were fitted with ski poles, making the scene a little more bizarre, picturesque and therefore, perfect.

Anybody who must have crossed the event without prior knowledge of what was happening must have been very confused. And, unfortunately, we don't have any pictures of that.

Most of the robots were dressed in ski suits as they zoomed down the mountain. And often, the robots were chased by their team. Or, as apparently humans and robots do, they wiped out. But a robot ski fail is a lot more adorable than one on the Olympic stage.

As we continue to watch the Olympics, now that we know this exists, it'll be hard not to imagine robots turning 1080s on the half pipe or attempting triple axels on the ice. Maybe, in the near future, as check out lanes continue to become automated, we'll also see a rise in the robot olympics. A robotic, athlete event in which 50 cm bots with no heads adorably compete for medals to adorn their hardware.

The pictures and video are enough to make you do a double take and stop you mid conversation. And it is worth stopping to watch and politely stare in awe of technology. This is movie material.