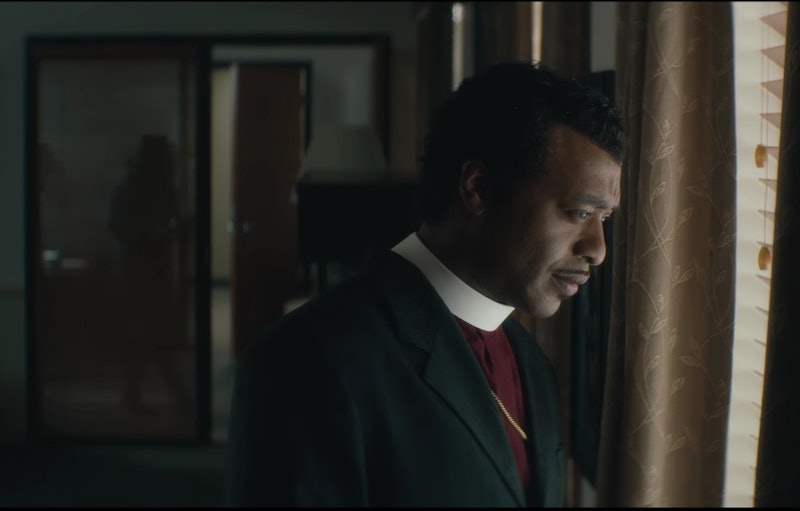 The latest Netflix original film, Come Sunday, tells the story of bishop Carlton Pearson's meteoric rise in the world of evangelical worship, and his dramatic fall from grace. The sin? Declaring that hell didn't exist, and all souls would reconcile with God. The new film features an all-star cast, including Martin Sheen, Danny Glover, and Academy Award-nominated actor Chiwetel Ejiofor, but photos of the real Come Sunday people give the story its depth.

The movie depicts how, one night in 1996, Pearson watched the horrors of the Rwandan genocide unfold on TV. The preacher realized his own philosophy meant these survivors were not only persecuted, but all hell-bound, as they weren't Christians. Pearson couldn't imagine a god that would be so exquisitely cruel. Despondent, he prayed. As he told UU World, he felt that he got a direct answer. "“We’re not sucking those dear people into hell. Can’t you see they’re already there—in the hell you have created for them and continue to create for yourselves and others all over the planet?" said Pearson. "We redeemed and reconciled all of humanity at Calvary.”

This idea was spread by Pearson in his new Gospel of Inclusion, that all humanity was saved by Jesus' sacrifice, and hell was a human creation and didn't actually exist. The new message came at a steep price; once the largest church in Tulsa, OK, the Higher Dimensions Family Church congregation dwindled to nearly nothing. Pearson's peers formally labeled him a heretic, and he was shunned by those he called friends and mentors. But Pearson's determination is the real story of Come Sunday, available April 13 on Netflix, which features an all-star list of actors.

More like this
24 Photos Of The 'Love Actually' Cast Then & Now
By Grace Wehniainen
You Can Finally Stream 'Ticket To Paradise' At Home
By Chloe Foussianes
'The Holiday' Director Just Addressed *Those* Sequel Rumours
By Sam Ramsden
These ‘Love Actually’ Plotlines Are “Out Of Date,” According To Director Richard Curtis
By Grace Wehniainen
Get Even More From Bustle — Sign Up For The Newsletter