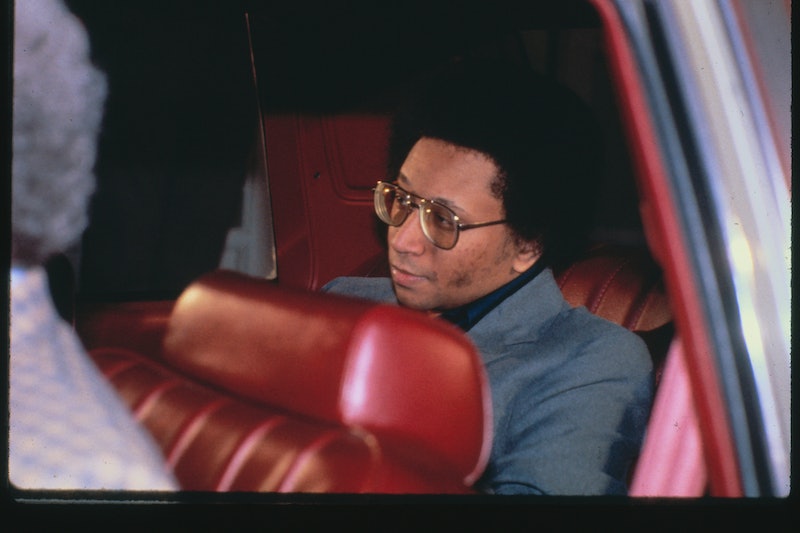 The ongoing investigation in Mindhunter Season 2 is the Atlanta Child Murders and it mirrors what happened in real life pretty closely. It looms in the background for each episode but sadly doesn't really pick up steam until they meet Wayne Williams in the Mindhunter Season 2 finale. Since the show so closely resembles the actual history of the case, fans might be interested to see how pictures of the real Wayne Williams match up to the Mindhunter actor, Christopher Livingston.

The Atlanta Child Murders refer to the kidnapping and murder of dozens of young kids between 1979 and 1981, most of them boys and all of them black. Holden and Bill are put onto the case while the former is in Atlanta to interview William Pierce and William Hance. A young hotel clerk chats him up and he reveals that he is from the Federal Bureau of Investigation and studies "multiple murders." She immediately brings him to a local restaurant where he meets with the mothers of some of the slain boys who, until that moment, weren't really being taken seriously by the cops. The series shows that the police department didn't hop onto the investigation initially because, the mothers suggest, poor, black lives didn't matter to them.

Until the body count starts to grow, which is when the FBI task force heads down to Atlanta and things really get serious. Much like it happened in real life, as outlined in the Atlanta Monster podcast, the cops and the FBI disagreed on the profile of the suspect. Given that it was black children dying, many thought that the Ku Klux Klan was responsible. Holden however, didn't agree, arguing that serial killers rarely cross race lines and believed it was a black man.

Eventually, after staking out many of the bridges in the city where bodies might be dumped, they stop 23-year-old Wayne Bertram Williams, a wannabe music producer who recruited young people in the area to make a music group sort of like the Jackson 5. After matching fibers in Williams' car to evidence, they arrested him in 1981.

According to the Washington Post, Williams was found guilty of two of the murders in February 1982. The FBI reported that, "Following the trial, the law enforcement task force concluded that there was enough evidence to link Williams to another 20 of the 29 deaths. He went to jail for life, and the Atlanta child killings stopped."

Williams is still alive and serving a life sentence in jail, though he maintains his innocence, according to the New York Times. In early 2019, Atlanta Mayor Keisha Lance Bottoms decided to reopen the case to test more DNA evidence in order to link Williams to more of the victims or otherwise come up with new, advanced information to give to families. And it would likely be welcome, given that some of the children's bodies were never found and are technically still considered "missing." Hopefully, with the newfound attention on the case — and the Mindhunter spotlight — they get some answers.

More like this
Where Is Oscar Torres In 'Only Murders In The Building' Season 2?
By El Hunt
Yinka Bokinni Recalls Terrifying Truth At Heart Of 'How To Hire A Hitman'
By Frances Stewart
'Sherwood’s Filming Locations Hold Deeper Meaning
By Rachel Mantock
Who Is 'Stranger Things 4' Fan-Favorite Joseph Quinn Dating IRL?
By Grace Wehniainen
Get Even More From Bustle — Sign Up For The Newsletter